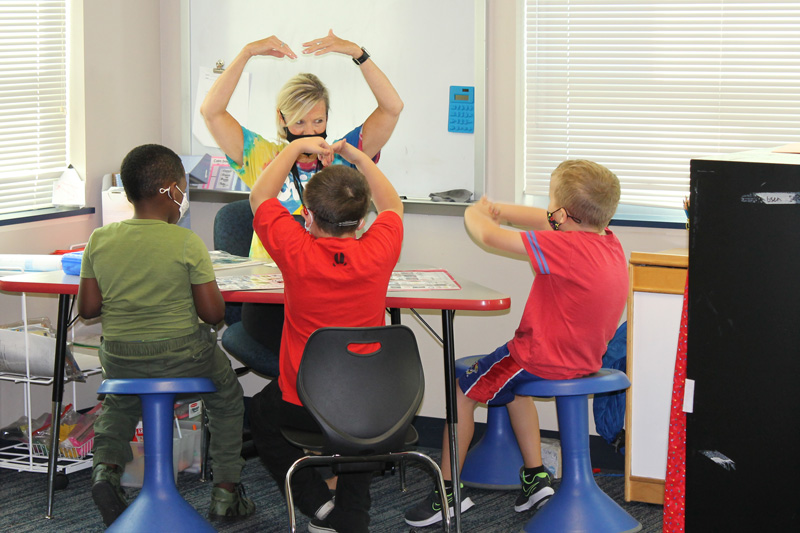 USD 232 has increased the starting pay for paraprofessionals in order to try to stay competitive and fill more than 20 vacancies. Above, paraprofessional Jennifer Strouse works with students. Photo courtesy USD 232.

Some workers in the USD 232 school district in De Soto are getting a pay raise.

At its meeting last week, the USD 232 school board unanimously approved an increase in the hourly rate of pay for paraprofessionals as well as student nutrition assistants. The pay increases are retroactive and will cover pay for the current school year.

In addition, the starting center-based paraprofessional pay increased from $13.25 an hour to $15 an hour.

Alvie Cater, district spokesperson, said the pay increases will be applied to all current employees in those positions, to include retro pay going back to the start of the 2021-22 school year.

Carrie Handy and Brian Schwanz with the district’s human resources department reported that the district has experienced vacancies all school year in these two types of positions.

USD 232 has about 22 paraprofessional openings and 12 student nutrition openings currently.

“It’s become apparent that we can no longer hire people at what we are paying,” Handy said. “Our struggle to fill positions started a bit last year, as some employees were not comfortable working out of fear of contracting COVID in the school setting.

“Likewise, some employees resigned because their children were in our optional remote platform last year, and they chose to stay home with them.”

Handy said staff has been reviewing ways to attract new employees and retain current employees in order to stay competitive.

Paraprofessionals work in classrooms to help students who may have learning differences or disabilities.

The pay increases make USD 232 the second highest paying school district in the area for these two positions, following Kansas City Kansas Public Schools, which offers a base pay of $15.66 for paraprofessionals and $14.45 for student nutrition assistants.

“Your support has meant a lot to all of your employees,” Handy told the school board. “We are blessed with some of the most talented support staff, and we do not take that for granted.”

Handy noted that many employers are struggling to fill and retain staff in the community. And just a few weeks ago, about 300 paraprofessional positions were vacant in the six public school districts of Johnson County.

Prior to the school board’s discussion, several patrons and school board members also shared their support for the pay increases.

“I know that we have looked at this at the beginning of the year and implemented a raise at that point,” said Ashley Spaulding, a board member. “I’m super excited that we are considering another raise tonight just as we’ve heard from a lot of paras who’ve reached out to us, and a lot of teachers and other educators who have been just in support of us voting in this direction.”