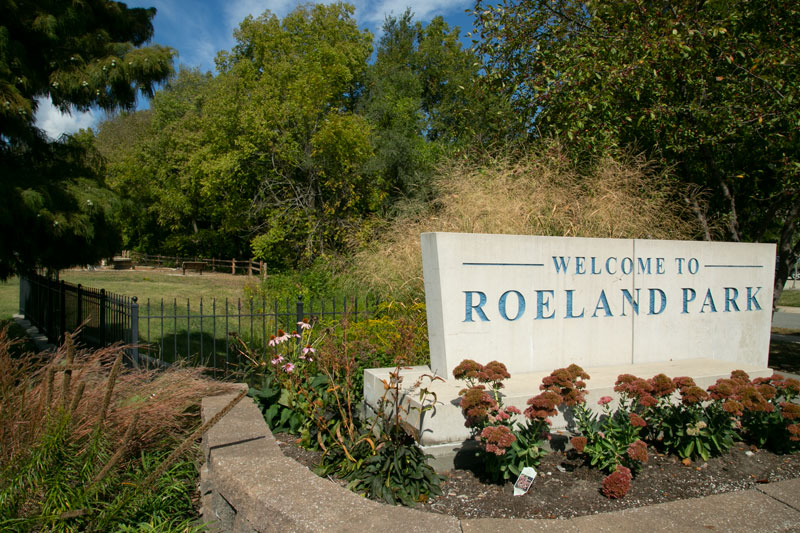 Cooper Creek, a small park off Johnson Drive in Roeland Park, used to be a healthy woodland.

Locals say the once-thriving strip of greenery featured mature oak trees and served as a habitat for native animals like squirrels and birds. Now, invasive plants are taking over the park.

Wintercreeper with its ivy-like tendrils strangles the oaks, while another noxious weed, the tree of heaven, leaves harmful deposits in the soil that lead to other clone-like growths.

But the city of Roeland Park is working to get rid of these invaders and is laying out plans for long-term restoration at Cooper Creek, which officials and residents say could be a model for how other Johnson County cities choose to deal with the same invasive species.

Councilmember Trisha Brauer’s objective is to rehabilitate the park, and she’s preparing to propose funding for phase three to the city council in the first quarter of 2022.

Brauer said residents initially presented the idea to her and asked for her help, which she said felt she had an obligation to fulfill. Second, Brauer said she saw it as a chance to improve an underutilized green space.

“It’s such a nice area of our town, but it had been neglected,” Brauer said. “I thought it was a great opportunity to beautify that area and make one of the gateways, one of the entrances into our city, more inviting and welcoming.”

Roeland Park resident Adison Banks, a former attorney who now works for an environmental nonprofit, is on the city committee charged with addressing the Cooper Creek invasive species problem.

Banks says there are three types of invasive species — most of which were imported from other continents years ago, planted for various reasons including aesthetic ones, and exploded in growth.

A group of volunteers cut wintercreeper vines from about 200 trees around Cooper Creek last November, but routine maintenance is needed to keep the plants out, Banks said.

As for the other two species, Habitat Architects, a Missouri-based environmental consultant, is going to remove and treat the tree of heaven and bush honeysuckle in the next month or so, he said.

Habitat Architects is also going to replant about 130 trees and shrubs in the woodland, Banks said, while using an herbicide to kill the wintercreeper vines that are growing on the ground.

Woodlands are helpful for a number of reasons, including flood mitigation, erosion prevention and air pollution filtration, Banks said.

If the problem at Cooper Creek goes unaddressed, Banks said the invasive plant species would slowly take over the woodland — and the woodland benefits will disappear, along with a potential habitat for animals.

“This woodland is being attacked and it is dying, slowly,” Banks said. “When we remove those invasive species and get native plants back in place, it’s going to come back to life. We’re going to have a lot more birds and other animals in there. It’ll be more of an asset to the city.”

Garrett said the issue is fairly widespread, and there’s a state noxious weeds list of 12 plants that the county is required to hunt and treat.

He and his team oversee more than 9,000 acres of natural areas county wide, and essentially uses a calendar of which species — and their location — to go on the offensive, he said.

It’s taken hundreds of thousands of dollars to complete the removal, as well as manpower from county staff, volunteers and nonprofits, Garrett said. This December, he and his team will be burning the 400 acres to prevent the bush honeysuckle from regrowing.

Like Roeland Park, other cities are trying to deal with the problem, too.  Earlier this summer, the city ofLenexa, hired goats to chew up invasive species at Sar-Ko-Par Trails Park.

An unhealthy woodland or prairie, just like an unhealthy human, is more vulnerable to sickness, Garrett said. But more than that, removing invasive species can increase resilience to climate change, he said.

“If you make the grasslands, prairie corridors and woodlands really resilient, they have a better chance of handling the fluctuations of our future climate,” Garrett said. “A lot of our work is trying to make these places able to take that change, versus an overgrown bush honeysuckle forest.”

In addition to actively removing invasive species from woodlands and prairies, Garrett is also working on educating parks and recreation agencies and Johnson County municipalities on effective removal.

Anyone who wants to help remove invasive plant species across the Kansas City region should connect with KC WildLands, Garrett said.

“They’re really good about taking people out to woodlands and prairies on both sides of State Line and teaching people about why our pre-pioneer Kansas City landscape is important, why the plants that are attacking are bad, and spend a couple hours removing them” Garret said. “So, [people] learn while they volunteer.”