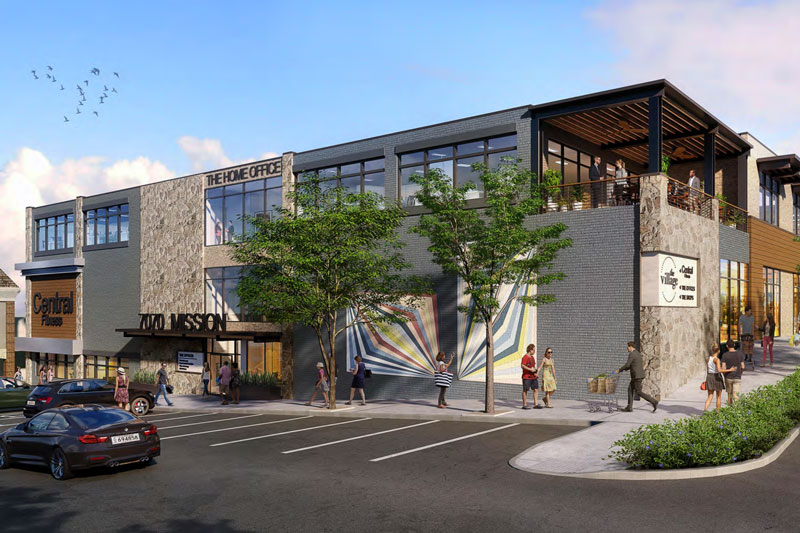 The Prairie Village Planning Commission unanimously approved a site plan for the redevelopment of the former Macy's building, which will result in a mixed-used, three-story building featuring office space, retailers, and potentially Hen House. Image via city documents.

The Prairie Village Planning Commission on Tuesday approved a site plan for the redevelopment of the former Macy’s building at the Shops of Prairie Village.

After a decade-long run, the shopping complex’s anchor department store closed in early 2020.

“We are excited about this project, we’ve been working on it since probably the day we bought the property,” Zike told the planning commission. “The fact we’re getting to this point is very exciting for us.”

A key piece of the proposal first unveiled last month would have the Hen House grocery store currently in another part of the Prairie Village Shops move to the first floor of the redeveloped Macy’s site.

But Zike said Tuesday that if the Hen House at the Shops doesn’t move to the main floor of the redevelopment, that space will be taken up by other retailers.

He said that there are several companies looking at leasing office space on the third floor the redevelopment, with options for spaces as small as 2,000 square feet and as large as “half a floor plate,” he said.

City staff recommended several changes to the initial redevelopment plan, including a revised landscaping plan and the addition of sidewalks going from the light at the busy intersection at 71st and Mission on the site’s southeast corner.

While Zike agreed to several of these recommendations — including submitting a revised landscape plan — he said he and his team believes the sidewalk from Alhambra Street to 71st Street would be sufficient.

Planning commissioner Melissa Brown asked if a diagonal pedestrian walkway could be added in the parking lot going from the traffic signal or the sidewalk along Mission Road.

The narrow sidewalk with a small grass patch separating pedestrians from the street is dangerous as drivers tend to speed through the light at 71st and Mission, she said.

“I see a lot of families with strollers standing on that little section of sidewalk, waiting to go back to their houses,” Brown said. “If we could just get them off of Mission Road or 71st Street really quickly and kind of divert them through [the parking lot], I think that would really enhance it.”

Brown agreed with that idea.

The planning commission unanimously approved the site plan for the redevelopment.