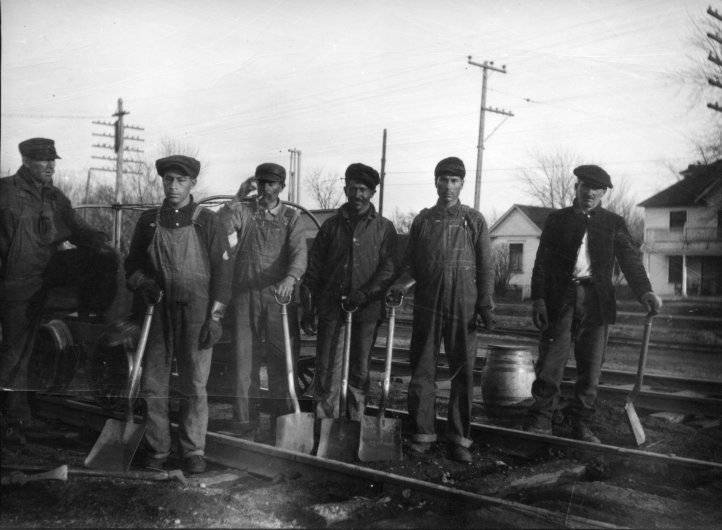 This photo from the 1930s shows a railroad section crew working on tracks near Lenexa. Courtesy Lenexa Historical Society: https://jocohistory.org/digital/collection/lhs/id/2503/rec/90

Latinos have a long history in Johnson County, Kansas. From the early 1800s on, Latinos have had a presence on the county’s landscape. What brought Latinos, especially Mexican immigrants, to the area? The Johnson County Museum’s Emerging Museum Professional, Ryanne Pritchard, an intern through UMKC’s Public History program, has researched to uncover more of the story for National Hispanic Heritage Month (Sept. 15 – Oct. 15 annually).

In the early 1800s, cattle drivers, traders, and wagoners from México and Texas regularly traveled through Kansas on the Santa Fe Trail. Between the summer of 1910 and spring of 1920, political opponents of Porfirio Díaz confronted the political leaders of México and Mexican citizens in a violent revolution against Díaz’s dictatorship. More than one million civilians died. This revolution spurred many Mexican families to flee to the United States. The immigrants sought to escape political persecution and sought refuge from the war. The United States was desirable because of its proximity to México and because of the booming agricultural, mining, and railroad industries, which almost guaranteed labor opportunities to the Mexican immigrants.

Working on the railroad

Between 1900 and 1930, many Mexican immigrants traveled to Kansas to work in the booming railroad industry in the Midwest, especially along the Santa Fe Trail corridor. As section hands, or traqueros, for the Santa Fe Railroad, Mexican laborers were responsible for constructing and maintaining the rail lines. The work was backbreaking, and the living conditions ranged from company-built section housing to literal boxcars on track sidings.

Twentieth century United States Census records reveal that the majority of Mexican families in Johnson County made their homes in five of the eight townships – including the present-day cities of Gardner, Edgerton, Olathe, De Soto, Shawnee, and Mission. Following the Great Depression, Mexicans continued working for the railroad industry and found other labor opportunities throughout Johnson County in farming and construction.

Ramón Ayala, his father José Macedonio del Refugio, and his mother Domitila (Contreras) Ayala, were one of the many families to immigrate into Johnson County. Born in Ciudad Juárez, México, in 1919, Ramón became a traqueros for the Atchison, Topeka, and Santa Fe Railway (AT&SF). The AT&SF was one of the largest railways in the country and extended across the Midwest to the West Coast. The railway was vital for transporting people, grain, and coal across the United States and, ultimately, transformed life in Johnson County.

The Ayala family established themselves in Clare, a small town located between Gardner and Olathe. Clare was a railroad community that had a post office, one-room schoolhouse, and train depot. Ramón and his siblings attended Clare School with their white classmates from first to eighth grade. After graduating from Gardner High School in 1938, Ramón enlisted in the United States military and was stationed in the Marshall Islands during World War II. After the war, Ramón married Guadalupe Juarez and settled in Kansas City. There, Ramón worked in the printing industry and developed an effective way to engrave graduation cards, which his employer patented. In 2016, at 96 years old, Ramón Ayala died in Kansas City, Mo. Ramón’s story is like many others from Johnson County’s history – people moving here to seek a better life.

Today the Latino community is the fastest growing population in Johnson County. Recognizing that Latinos are underrepresented in its exhibits and collections, the museum launched the Latino Collecting Initiative in 2019 and has been working to make long-lasting relationships in the wider Latino community. In addition to the artifacts, documents, photographs, and stories that the museum has collected from its new community connections, the museum has also uncovered Latino history hidden in its existing collections.

The Ayala family story is a perfect example – the school photograph featuring Amparo and Cristobol Ayala has been in the museum’s collections since 1994. While the white students at the Clare School were identified, there were only tentative identifications for the Ayala children. Similar existing connections in the museum’s collections have been made with the Magana family near Kenneth in southeastern Johnson County, and with the Gomez family; long-time residents near Wilder. The museum hopes to continue to make new connections and additions to its collections, as well as uncover existing Latino history such as the Ayalas.

The Johnson County Museum needs your help to make its exhibits and collections more representative of the county’s population and history! Share your story at jcmuseum@jocogov.org to make a connection!

——–
About the Author
Ryanne Pritchard is a second-year graduate student in UMKC’s Public History Program. Her research focuses on African-American/Black history of the Kansas City Metro region, including both sides of the state line. Ryanne served as the Johnson County Museum’s inaugural Emerging Museum Professional Intern. This program was designed to create pathways to the museum profession for people from underrepresented communities. This paid internship was launched with support from JE Dunn Construction and is made possible through the ongoing support of the Johnson County Museum Foundation.