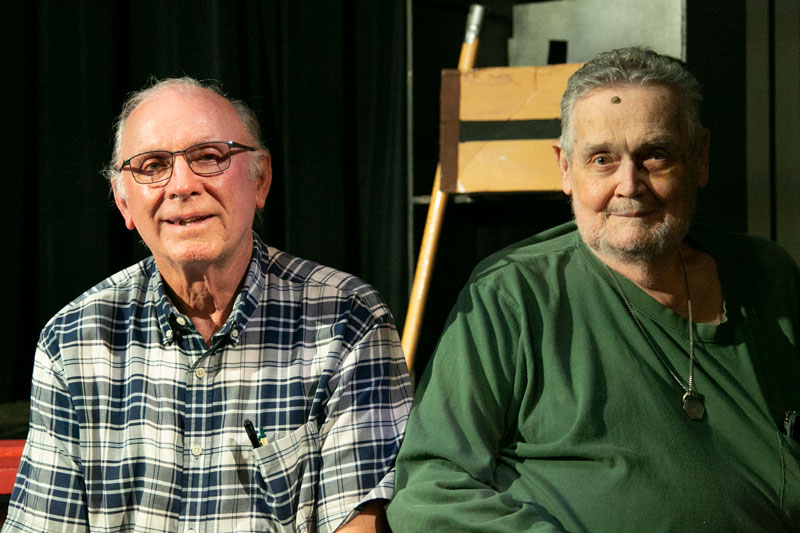 A group of 20 SM East alumni honored retired teachers Bryce York (left) and Eldon Evans (right) by creating a virtual reprise of the 1973 production of "Spoon River Anthology," an Edgar Lee Masters play that focuses on life and its hardships. Evans and York watched the reprise together in the SM East little theater on Sept. 30.

As Shawnee Mission East alumna Cheryl Appell drove back to Kansas City from Colorado in October 2020, an idea for breaking through the social isolation of COVID-19 restrictions dawned on her.

After searching for ways to work with others in the middle of a pandemic, Appell decided to put together a reprise of SM East’s 1973 rendition of “Spoon River Anthology,” Edgar Lee Masters’ 1915 play. Soon enough, the effort became a way to honor two retired SM East teachers.

First, Appell wrote letters to last-known addresses of SM East alumni who performed in the school’s  “Spoon River Anthology” production back in 1973. She spent hours on Facebook until she compiled a list of 20 alumni to create a virtual production.

“There was something about the limitations of COVID that I just wanted to push through, both personally and for my family,” Appell said.

Appell, who now lives in Colorado, coordinated with the alumni spread out across the U.S. The group agreed to wear black, find a white background and record themselves reading one of the monologues in “Spoon River Anthology.”

Alumni sent their recordings to Dean Wilwhite, a current teacher who helped the group create the virtual production and convert it to a DVD, Appell said. The effort led to a 50-minute production, and copies for the two honorees to keep.

The reprise meant more to the alumni than pushing through COVID-19 limitations, though. It also served as a way to honor two retired SM East teachers: Eldon Evans and Bryce York.

After finding Evans on Facebook, Appell said she felt “there was no time like the present to do this” for a former teacher. She recalled how the production brought together the joy of guidelines from debate class and the freedom of expression in speech class.

“Welcoming that large of a Spoon River cast was a gift to many of us non-drama class students, enabling us to be in a production,” Appell said.

Evans and York put on numerous plays together and say it “was a wonderful partnership.” While Evans worked with the actors directly, York designed the sets.

York said when he designs a set, he pictures it from the audience’s point of view. He completed the “Spoon River Anthology” set, which featured complicated lighting and different staging, as part of his master’s thesis.

The pair, who still get together for coffee, watched the reprise for the first time on Sept. 30 in SM East’s little theater. York said it’s clear: The talent of his former students is still there.

Evans said the effort the 20 or so alumni put into the reprise is so unbelievable, “it floors [him].”

“These people took who knows how much time out of their lives and went to all the trouble just to do this for he and I,” Evans said. “I just can’t think of any greater tribute than that. I can’t.”