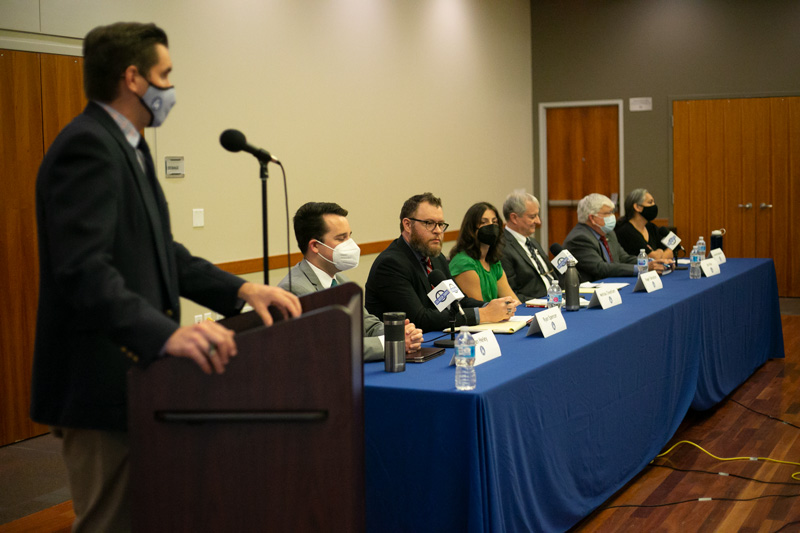 In Ward 2, candidates Melissa Cheatham and Roger Tarbutton are running for the seat being vacated by Councilmember Curt Skoog, who is running in city’s mayoral race.

The Post livestreamed the forum on its Facebook page. The entire video can also be found embedded below. Note responses from Cheatham and Spencer on climate change and all closing statements are in a separate video.

Here are the questions and the corresponding time stamps:

1) In line with current guidance from the county, Overland Park at this time is strongly recommending … but not requiring … masks be worn indoors. Some Johnson County cities, namely Prairie Village and Roeland Park, have mandated masks in most public indoor settings amid spread of the Delta variant. If elected, you may be confronted with a decision that involves the city’s response to the pandemic.

A two-part question: what is the best approach, in your opinion, for the city to take in helping mitigate spread of the disease? And under what circumstances, if any, would you support imposing a citywide mask order? [10:54]

2) Property values have increased sharply across Johnson County in recent years, making many of our readers nervous about the burden of property taxes on their incomes. Overland Park has the lowest mill levy rate by far of any city in the county, at just around 13 mills.

Though that will be going up this coming year. The current city council voted to pave the way for a 1 mill increase, which will raise additional revenue that will go primarily towards mental health supports for police and first responders. For a homeowner with a home appraised at $350,000…the rate increase translates into about $40 more dollars per year, according to the city. Is this property tax increase for the purpose its intended worth it, in your opinion? Why or why not? [20:55]

3) Here’s a bigger picture question that encompasses issues related to growth and development that many of our readers are interested in. Overland Park, like a lot of Johnson County cities, was established years ago on the idea of single-family homes being the bedrock of the community. And in many places in the city that is still definitely the case.

But Wards 1-3 are more densely populated, underlining the need for potentially more diverse housing stock: duplexes, apartments, condos, and the like. If elected, what would be your stance on how Overland Park should tackle its future housing needs? And what steps would you take on the council to make that happen? [28:42]

4) Follow up to that posed by reader Steve Snitz: What is your definition of “affordable housing” and does Overland Park offer enough of it? [39:38]

5) Just this week, Overland Park hosted a community input session regarding the future of the farmers’ Post readers in Overland Park and elsewhere continue to voice concerns about the effects of climate change on life here in Johnson County. They point to some of the torrential rains we’ve had this summer upwards of five to six inches in a few hours on some occasions,which put stress on the local flood control systems. In your opinion. What, if anything, is the biggest threat Overland Park faces in the next few years when it comes to a changing climate? And what steps would you support if elected to help meet that threat? [56:31]