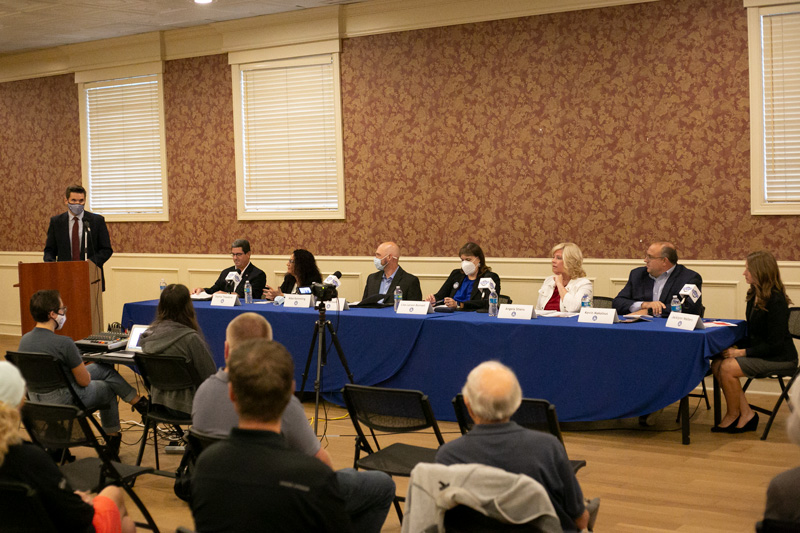 Making downtown more pedestrian friendly, the rise of new multi-family developments and the impact of property taxes, were among the variety of topics covered Tuesday evening at a Post forum for candidates vying for four contested seats on the Shawnee City Council.

All four city council seats on the Nov. 2 ballot in Shawnee are contested.

In Ward 1, candidates Tony Gillette and Sophia Theodore are vying for the seat filled by outgoing Councilmember Matt Zimmerman, who is not running for re-election.

In Ward 2, incumbent Councilmember Mike Kemmling is defending his seat against contender Eric Persson. Kemmling did not attend the forum, citing a work conflict.

Lastly, in Ward 4, candidates Jacklynn Walters and Kevin Makalous are competing to win the seat filled by outgoing Councilmember Lindsey Constance, who is not running again.

The Post live-streamed Tuesday’s forum on its Facebook page, and the entire video can be found in the embedded link below.

1. Property values have increased sharply across Johnson County in recent years, making many of our readers nervous about the burden of property taxes on their incomes. In Shawnee, the city’s mill levy stands at 26.625, putting it on the lower end of cities in Johnson County. Also, over the past decade, voters have approved multiple sales tax assessments to go towards things like road maintenance, curbs and sidewalks and park improvements. Assess Shawnee’s “bang for its buck” for taxpayers. Do you think the city’s current tax

rates are appropriate for what residents see in return? Would you support raising or lowering taxes if elected? [13:35]

2. What’s one area where you’d like to see more money allocated in Shawnee’s budget and one where you think the budget could be cut? [28:10]

3. The city has taken several steps in recent years into making downtown Shawnee a destination. Part of that is using so-called “road diets,” that is, taking busy roads such as Nieman, from four lanes down to three, in order to slow traffic with the aim of making the area safer for pedestrians. Now, the city is considering a similar “road diet” pilot project for Johnson Drive through

downtown Shawnee. Would you support such a move going forward? If not, are there alternatives to explore that would achieve the same goal of making downtown Shawnee more pedestrian-friendly? [37:37]

4. Like other growing parts of Johnson County, Shawneee has seen some homeowners push back against proposals for new residential projects, particularly multi-family developments. How should the city reconcile the desire for the continued development of some parts of Shawnee with the vocal concerns

of some residents who oppose higher-density multi-family projects? [49:04]

5. In line with current guidance from the county, Shawnee at this time is strongly recommending … but not requiring … masks be worn indoors. Some Johnson County cities, namely Prairie Village and Roeland Park, have mandated masks in most public indoor settings. If elected, you may be confronted with a decision that involves the city’s response to the ongoing pandemic. What is the best approach, in your opinion, for the city to

take in helping mitigate spread of the disease? Under what circumstances, if any, would you support imposing a citywide mask order? [57:50]

6. It’s been two years since Shawnee