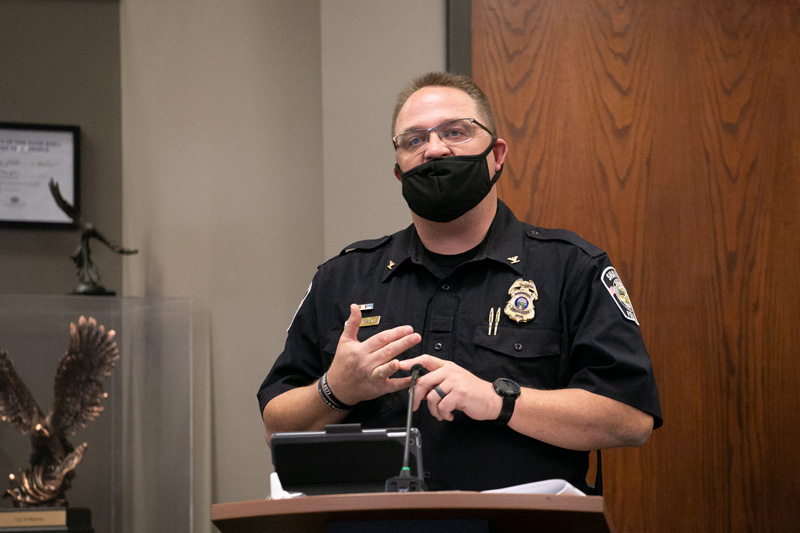 Shawnee city leaders are discussing how to spend $7.5 million the city was allocated as part of the American Rescue Plan. Police Chief Sam Larson (above) said adding two mental health co-responders will be a benefit for public safety.

Shawnee is exploring a variety of ways to spend $7.5 million in federal COVID-19 relief.

This round of federal funding comes from the $1.9 trillion economic stimulus package authorized in March by the American Rescue Plan, according to city documents.

The city’s total allocation of American Rescue Plan dollars is $7,564,030.

In general, the emergency funding for the city is designed to “remedy this mismatch between rising costs and falling revenues,” according to a city memo. But the funds can also be used for the ongoing public health emergency, grant opportunities, small business and nonprofit assistance and household assistance, among other uses.

City leaders on Monday discussed their options, such as creating a “land banking” fund for the city to buy up private property for future development, adding two mental health co-responders to work alongside the Shawnee Police Department and a handful of infrastructure and connectivity improvements.

Here’s a list of items up for consideration, as well as their estimated allotment:

Councilmember Kurt Knappen also asked the city staff about adding video livestream capabilities for city meetings and possibly dedicating some of the federal funds toward that project.

City staff have slated that discussion for Oct. 25.

Nothing official was decided during the committee meeting.

City staff will present options to the mayor and councilmembers in a spreadsheet for each elected official to rank their preferences. Afterward, city leaders will have a public discussion about the funds in an upcoming meeting.

In general, the majority of the council showed support for most of the projects, particularly in adding mental health co-responders, creating the land bank for development and building citywide connectivity.

“It’ll absolutely benefit us,” said Chief Sam Larson of the Shawnee Police Department. “Mental health is actually one of the very large pieces of the ARPA funding, and this fits in a hundred percent with the purpose of ARPA funding.

“We can absolutely do this and we will be a leader in mental health response, in my opinion, in the county and the state, probably in the country, for a city of our size to have four co-responders. Mostly, it’s going to help us be a safe community and have safe members of our community.”

While some of his fellow councilmembers said they’d like to see the land bank funds cover the entire city, Jenkins said he believes that concentrating any land bank funds to a certain area, particularly downtown, will be more beneficial for the community.

“Grants and things like that, they’re neat, they sound good and all this stuff, but that money, once you spend it, it’s just gone. There’s no return on that investment,” Jenkins said. “We’re doing a lot downtown. We’re making some good headway. It’s important that we follow up on those expenditures we’ve already made to guarantee some sort of success for the downtown revitalization.”

Dedicating $3 million of the federal dollars to the Monticello Road and 75th Street improvement projects was part of discussions, but city leaders opted to remove those projects for consideration.

The projects will instead be funded through a bond issuance the Shawnee City Council approved earlier in the evening at its regular meeting.

A recording of the meeting is available on the city website and below. Discussion begins at 3:36.