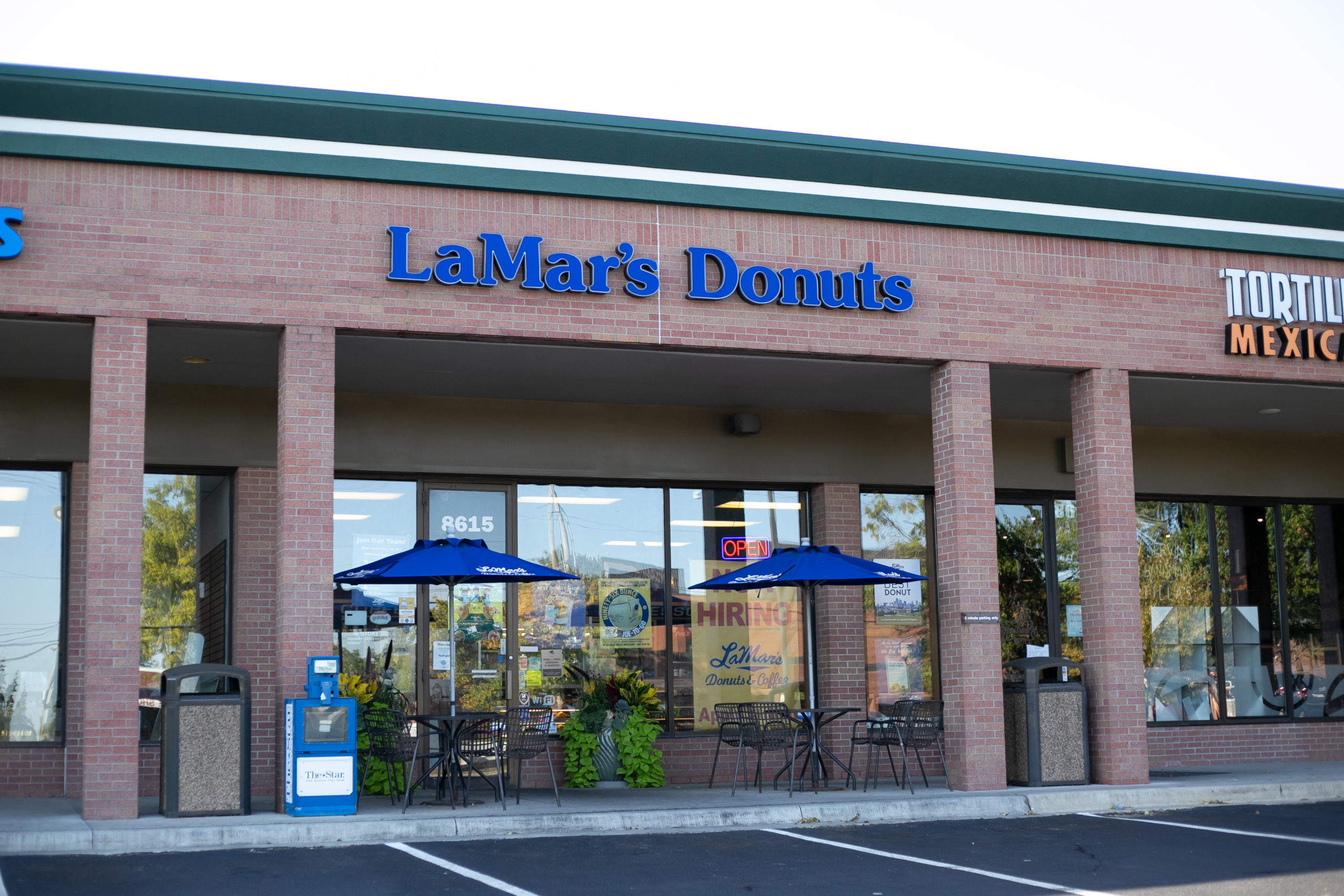 LaMar's Donuts on College Boulevard in Overland Park closed for part of the day on Saturday after employees walked out due to their concerns over a lack of management and health and safety issues. The store reopened the next day after the company flew in a crew from Denver, Col. to run the shop. Photo credit Leah Wankum.

The sign that hung in the window of a LaMar’s Donuts in Overland Park this past Saturday was conspicuous.

It read: “We will not be open tomorrow or until further notice. We all quit. Sorry for any inconvenience. Under appreciated, underpaid overworked staff.”

Located at 8615 College Blvd., LaMar’s has been a consistent staple, selling donuts in south Overland Park for many years.

After the employee walkout, the company’s corporate office promptly responded.

Now, company officials say the franchise is back open with the help of a temporary crew of workers.

But the workers who quit Saturday say they won’t be coming back.

The main driver of the walkout occurred earlier in the week, says one of the workers who quit, Lindsay Dube.

Dube says the store found out their general manager had quit abruptly through a handwritten letter the manager had left behind. That put an extra burden on the staff that remained, Dube said.

“Our managers that were still there were having to work a lot to keep the store running, and corporate was ignoring their phone calls,” Dube said.

In addition, Dube said there were health and safety concerns at her location.

She said there was mold in the back of the shop and “sinks and drainage weren’t working properly.”

Ron King, a spokesperson for LaMar’s corporate office, said he is not sure about the calls Dube is referencing.

To the best of his knowledge, he said, someone in the management chain may have received some complaints, but they did not work their way to corporate headquarters.

“I’m not saying that [the employee] is incorrect that someone was calling a corporate office,” King said. “If they did, and we didn’t respond, then it’s our shortcoming.”

Dube said after five days of not hearing back from corporate and with no general management in place, the Saturday morning crew of four decided to quit.

The hope, Dube said, was to close the doors early for the day on Saturday.

“But the line wasn’t dying down,” Dube said. “It was obviously not going to slow down anytime soon.”

So, one of the managers on duty stopped more customers from getting in line, while the other employees helped those who had already been waiting, Dube said.

By the afternoon, the employees had closed the store and put their sign on the door.

Initially, King said he believed the issue of the mold and sink was already addressed before seeing FOX4 News Kansas City’s report on Sunday with the pictures of the mold.

King said he flew to Kansas City to see the issues for himself.

He told the Post Tuesday that the Kansas Department of Agriculture did perform an unannounced health inspection Monday at the Overland Park location.

He said in the 10 areas of safety and hygiene that the department inspected, the store was in compliance with nine of them.

“The one area that we were out of compliance with was the inspector saw 10 to 15 fruit flies in the store,” King said. “We are in the process of replacing the fruit fly trap.”

Dube says employees still felt like they were overworked and under appreciated. All four associates who walked out that morning, including herself, will not be coming back.

“I hope that they learn from this and do better,” Dube said.

The store ultimately did not stay closed for Sunday like the sign left by the now-former employees said it would.

King said a crew was flown in Saturday night from Denver, Col., to staff the store, and it reopened at 4 a.m. the next morning.

Those temporary replacements coupled with 11 workers still on staff at that franchise have kept the shop open this week, King said.