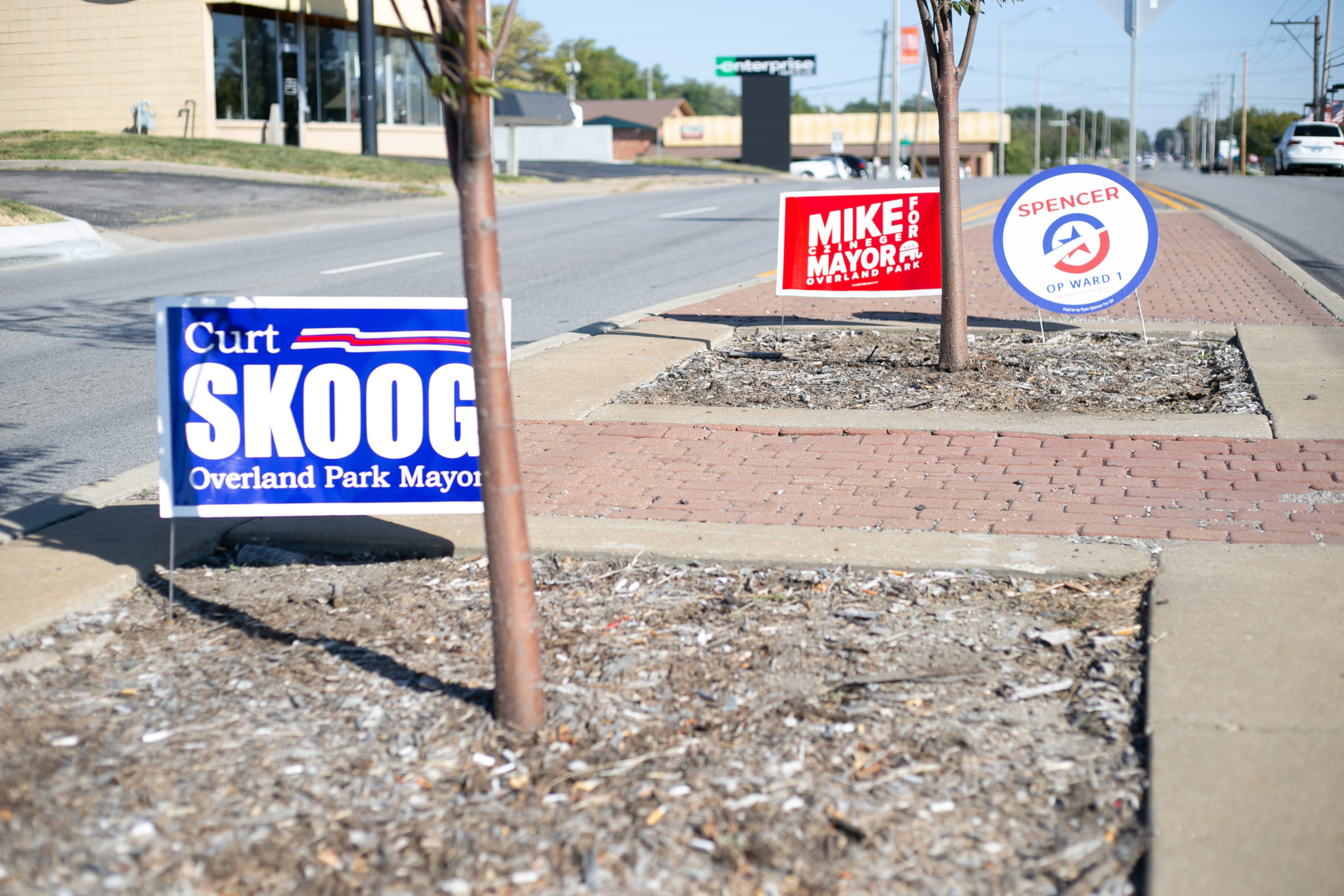 Former business executive Mike Czinege has used the GOP elephant symbol on his campaign signs for Overland Park mayor this year and says "it's nothing short of deception" to not be open about his Republican Party affiliation. Czinege's opponent, long-time City Councilmember Curt Skoog, recently change his own party membership to Independent and says using party labels could introduce an element of national divisiveness in local issues. Photo credit Leah Wankum.

County Commissioner Charlotte O’Hara was buoyant when she took the stage at an August anti-vaccination rally.

Still glowing from her own 2020 election, the first-term office holder was newly encouraged by Mike Czinege’s win in the four-way primary for Overland Park mayor.

“Mike and I, both of our signs, had the el-e-phant,” she said, drawing out the last word. “We didn’t bow down to this non-partisan nonsense.”

“He ran hard right,” she continued. “We have to let the candidates understand you have to run hard right.”

Almost all local government elections in Johnson County are nominally non-partisan — meaning candidates aren’t required to list party affiliation when declaring their candidacy and that party affiliation isn’t listed on the ballot.

The sheriff and district attorney’s offices are notable exceptions to the non-partisan rule here — but there has been talk over the years of moving more local offices to partisan elections. The commission that reviewed the county’s charter in 2010 discussed it, though this year’s charter commission has not put forth its ideas yet.

Still, regardless of what the county charter says, the idea of non-partisan elections could be moot if candidates decide on their own to openly identify their party affiliations. The active coordination of campaigning between Mike Czinege and the Johnson County Republican Party in the Overland Park mayor’s this year could become the norm in more local elections in years to come.

Czinege acknowledges he makes his GOP affiliation a part of his introduction when knocking on doors. As a retired business executive who has never run for office before, he said he believes his party affiliation gives people a better idea of who he is right off the bat.

“A nonpartisan race doesn’t mean that a candidate doesn’t have a world view or doesn’t have a party affiliation. All of us do,” he said. “If you don’t share that with people it’s nothing short of deception.”

As a Republican, Czinege said he believes in smaller and less intrusive government, lower taxes, freedom of speech and “people’s right to choose.”

He reiterated some of that in a 53-minute interview on the podcast “Kevin Kietzman Has Issues,” hosted by the former Kansas City sports talk radio host who has turned decidedly political himself since being fired from 810 WHB in 2019.

In that podcast, Czinege described himself as a “law and order, pro-life guy.”

He said he entered the mayor’s race only a few days before the filing deadline June 1 after being convinced that the race needed a Republican candidate.

Czinege has said his goal is to restore a voice to residents who don’t think they’re being listened to, to lower crime and to use tax dollars more efficiently. He also emphasized his opposition to increased high-rise apartment construction — what he called “apartment sprawl” — and the fear of what that could mean for residents.

“It’s changing,” he said of Overland Park. “There are some leading indicators out there that it’s changing and not changing necessarily for the good.”

He also pledged to “restore single-family neighborhoods, so things look like they used to look,” with apartments separated from single family homes, which should be made more affordable.

Czinege also had some dark forebodings about the direction the city could take, referencing unrest in Seattle and Portland last year amid national protests following the murder of George Floyd.

“The liberal agenda wants to come to the suburbs. They want the suburbs,” he said. “I will be a firewall between the liberal activist agenda of defunding the police and rising crime.”

Although there’s always been a certain amount of below-the-surface partisanship in local races, Skoog, who has served on the city council for 16 years, said he has been surprised by the extent Czinege has used it in this race.

“I do not ever remember a time where a candidate put his party symbol on his campaign literature, let alone have national party people advocating for defunding and knocking on doors for them,” he said.

Mears tweeted while on an August trip to Overland Park to knock on doors for Czinege.

“That is a dramatic change at least from my perspective,” Skoog said. “Our tradition in Overland Park and Johnson County is non-partisan elections,” he added, citing it as a reason he changed his official party affiliation to Independent shortly before entering the race earlier this year.

“Our recipe for success has been working on Overland Park and Johnson County ideas, not Topeka and Washington, DC ideas.

“All you have to do is look at cities around the metro that are partisan and see the challenges they have in operating and being successful because they’re too busy fighting over party issues instead of local issues, he added.

Overland Park has had a long string of successes and is highly rated for quality of life issues, including a recent Money Magazine ranking of the city as seventh in best places to live, Skoog said.

A May survey conducted by the Chamber of Commerce and Home Builders Association of Greater Kansas City seemed to back that up with results showing widespread satisfaction with the way the city is run. (Though some critics took issue with the survey’s sample size of 500 registered voters.)

Both Skoog and Czinege insist that Overland Park voters are more concerned with local issues than the ones that make national news.

Nevertheless, some of that national divisiveness may find its way into local decisions on such things as mask and vaccination rules and even belief in outcome of the 2020 election.

He also urged residents to get vaccinated against COVID-19 at a recent city council meeting.

Czinege said he is not in favor of mask mandates and does not believe employers should be allowed to require vaccinations.

“I believe those should be individual choices. All those decisions should be made with individual and their health care professional,” he said.

Czinege was not at the rally where O’Hara spoke, but he said, “I am in favor of vaccines if people choose to get them,” he said, adding that he would not discourage someone from being vaccinated.

Czinege said he sometimes gets questions during door-to-door campaigning on whether the 2020 presidential race was rigged or whether former President Donald Trump actually won.

His answer: “I tell them I’m a data person. I’ve always been a data person. If someone can show me that he did win, if it’s factual, if it’s provable, if it’s verifiable and it goes through the court system, then I would believe he won. Otherwise I haven’t seen any evidence that would suggest he didn’t lose.”

There is no credible evidence to support the notion that Trump won the 2020 election, and a Republican-backed effort to review votes in a key Arizona county concluded that Biden won.

Deann Mitchell, Johnson County Democratic Party chair, said in an email statement that COVID-related policies have contributed to an already divisive atmosphere locally but COVID response and economic recovery should not be partisan issues.

Fabian Shepard, chair of the county Republican Party, pointed out that there has been party involvement by Democrats in past races who helped in fund raising and campaigning.

“This year, I decided I wouldn’t sit on my hands and just let Democrats run us over in local elections, so I made the decision that the Johnson County Republican Party was going to be very deliberate about making a difference for our GOP candidates,” he wrote in an email.