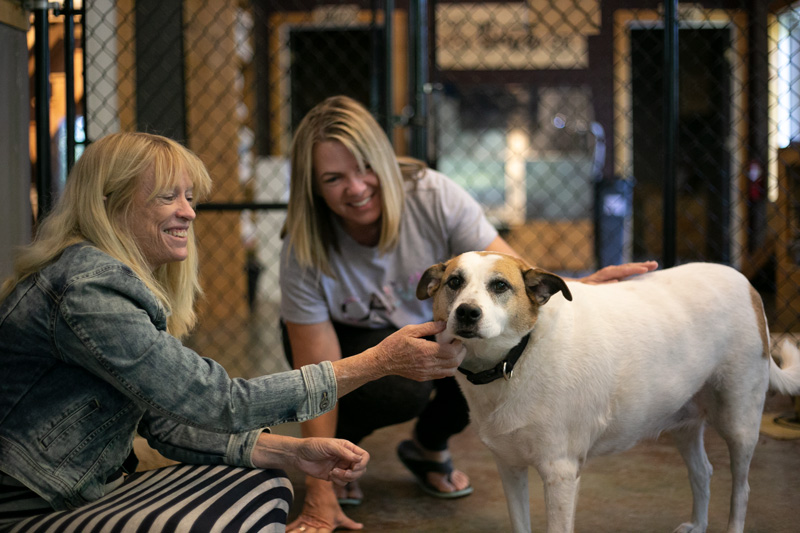 Imagine Furever Ranch has opened as a sanctuary and animal rescue operation for senior dogs whose owners may no longer be willing or able to care for them. Above, volunteer Shelee Brim (left) and co-founder Kathryn Lask give some scratches and pets to pooch Zoey.

Older dogs are resting easy on a small ranch in northern Shawnee.

After celebrating a grand opening in late August, Imagine Furever Ranch has already become home to more than half a dozen dogs. In fact, co-founders Kathryn Lask and Todd Mitchell say they are accepting a steady stream of new surrenders and rehomed senior dogs as part of their mission to help pooches age in place.

“We’re really trying to enhance the end of their lives as much as we can,” Lask said. “We have a dual mission: It’s not only saving senior dogs, but we’re [also] a Christan community, so we want people here. With dogs, people are attracted to that, so we want to put out the message of Jesus and kindness and grace, and putting that together with the dogs.”

The senior dog rescue and sanctuary cares for aging dogs who have been abandoned, or were on a kill list or at risk of being placed on one, as well as senior dogs whose owners are no longer willing or able to care for them.

The site was previously home to a Montessori school.

Lask now-adult son attended the school when he was younger, and she that when she drove by the site in May she noticed it was for sale.

“My brain just started to explode, because Todd and I had already started to talk about, let’s find some land,” she said.

Now, Lask herself is planning to move into the house on the 4-acre site next week.

Inspired by a pooch named Lucy

Since they started dating a few years ago, Lask and Mitchell have enjoyed caring for senior dogs they’ve rescued over the years.

One of them in particular, a Westiepoo named Lucy, inspired the couple to create an animal rescue operation for older dogs.

“She was a dog who introduced us to aging dog problems,” Lask said. “These older dogs … take a lot more patience, a lot more compassion, and just a lot more time, medical costs and what-not, and we thought, what do people do with these animals? It just broke our hearts to think that they would be put down or abandoned in some way.”

Lucy died in December 2020 after developing sudden blindness and a thyroid disorder.

She’s buried on the Imagine Furever Ranch property, and the couple is building a memorial garden for other dogs around her grave.

The mission of Imagine Furever Ranch is modeled after a similar shelter in Spring Hill called Always and Furever, where the couple occasionally volunteered.

There is minimum age requirement for surrendered dogs, but all dogs must be friendly with other dogs in order to live with their new roommates.

Lask said they don’t have a strict capacity limit but are trying to naturally limit the number of dogs they take in in order to create a good mix dog sizes and temperaments. They currently have half a dozen dogs.

“I think the reason it’s become so important to me is the opportunity to build a bigger Christian community, and fitting that together with the love of dogs, it just is so fulfilling,” Lask said. “It just feels like a bigger purpose than either one individually.”

How you can visit, volunteer

Imagine Furever Ranch is open to the public on Saturdays from 10 a.m. to 2 p.m.

The nonprofit is accepting volunteers and donors. All contributions go directly toward the shelter.

“If they’ve come, and they’re ready to take the plunge and get involved on whatever level, it could be just coming to sit with the dogs, even just sitting and being a companion to the dog is a huge service, I think, to the dogs,” Lask said.

Lask’s goal is to fill all two-hour volunteer slots from 8 a.m. to 8 p.m. seven days a week.

“It’s just really wanting to build as many people into feeling like they’re part of this here,” Lask said. “We want to invite people to come to the property. We want people to feel like it’s theirs, too.”