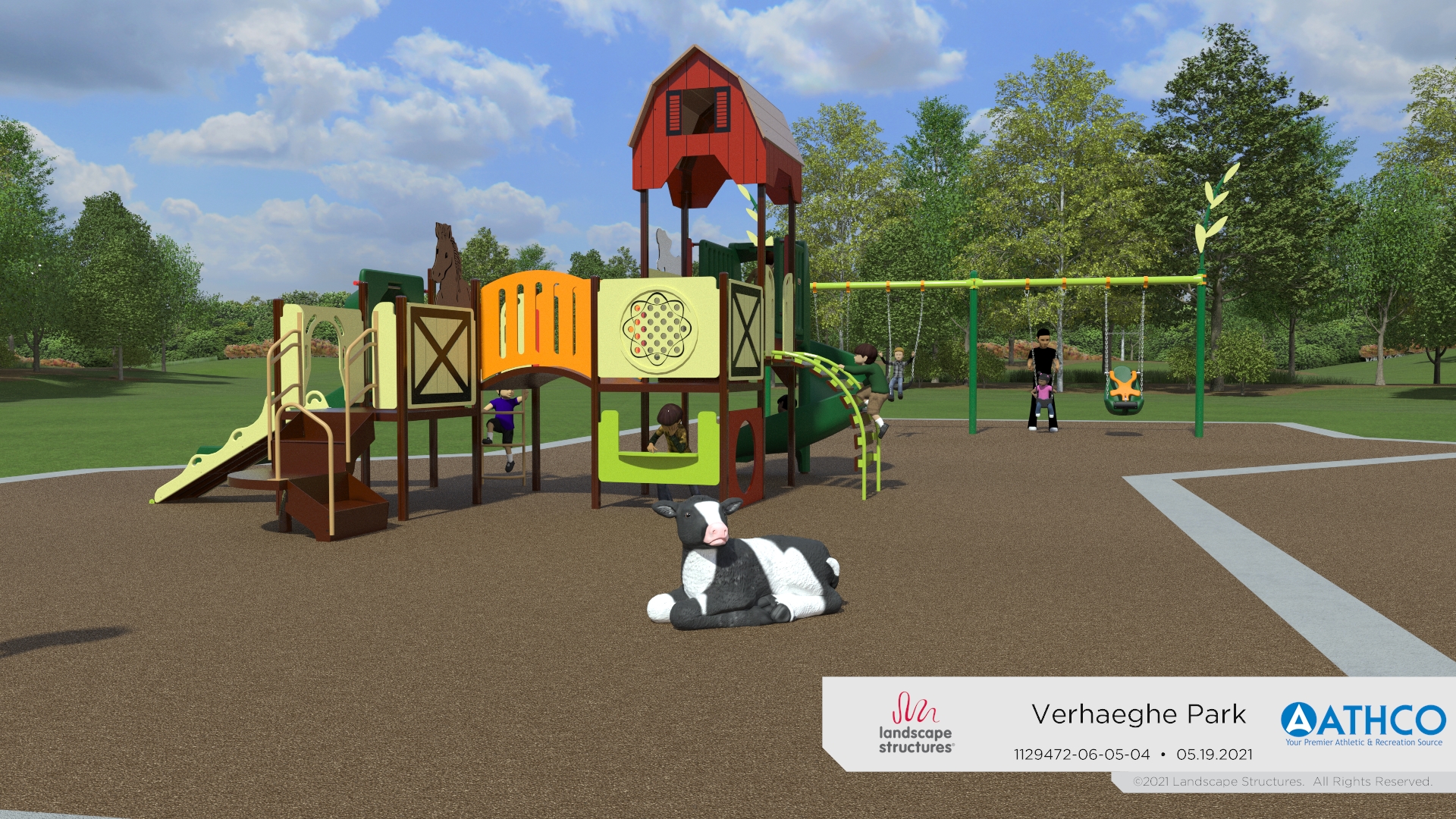 An artist’s rendering of the Verhaeghe Park playground expansion featuring a barn façade atop a climber, detailing on the top ends of the new swing sets which represent shocks of wheat, and piece of play equipment shaped like a cow.

After formally being dedicated in October 2020, Arthur and Betty Verhaeghe Park, located at 11401 W 167th St. in Overland Park, is already getting a major playground expansion, thanks to the Verhaeghe family, which donated the 42-acre property for the park.

“They (The Verhaeghe family) requested the consideration of an expansion of the playground and they asked us to have it designed and get quotes, and via a board-approved agreement, the family had an input on the design and agreed to reimburse JCPRD for the cost of the installation,” explained JCPRD Superintendent of Parks and Golf Courses Bill Maasen. “It more than doubles the square footage of the playground.”

While the park’s original playground was primarily for ages five to 12, the expansion adds equipment for ages two to four. A swing set is also being added, and will have two standard swings, a toddler swing, and a child-sized accessible swing. A specific date for the opening of the playground expansion hasn’t been set, but the project is under way and will open this fall.

“It’s been gratifying to see so many children and families enjoying the park so we felt like it was a good time to add some additional playground equipment that could be used by even more families,” said the Verhaeghe’s son, Gordon Verhaeghe. “Our parents loved their family and this land, and we felt a park and playground where families could gather and enjoy time together was a wonderful way to honor their memory. We all have such wonderful childhood memories and appreciate how fortunate we were to grow up on this land. We have enjoyed the beauty of this land and wanted to preserve a piece of that for future generations to enjoy.”

“Our families have been to the existing playground,” added the Verhaeghe’s daughter, Anita Felzke. “We enjoyed it and especially the tractor climber and overall farm theme. We like that there’s almost always someone there on the playground when we’ve gathered at the shelter nearby or walked by on the streamway trail. We feel that would really make our parents happy that children are enjoying it!”

“It is so heartwarming to be walking along the trail and hear from a distance the children’s laughter as they are playing on the playground,” said the Verhaeghe’s other son, Mel Verhaeghe.

The playground expansion continues the farm theme adopted for the original portion of the playground as requested by the Verhaeghe family to honor their nearly 100-year history of farming and raising bedding plants in the area. There’s a barn façade at the top of the new climber, similar to that of the original climber; a piece of play equipment shaped like a cow was selected to represent the Verhaeghe’s cattle operation; and detailing on the top ends of the new swing sets will represent shocks of wheat.

In association with staff at the Johnson County Museum, JCPRD is also developing an interpretive panel for the site about the importance of agriculture in Johnson County with a spotlight on the Verhaeghe family.

“The sign will help explain how our grandfather’s hard work paid off,” said Mel Verhaeghe. “He moved to the farm in 1919 and survived the hard times of the 1930s with a family and expanded the operation. So we look at the sign with pride and hope that when people read it they will appreciate the challenges of farming. Farming has changed over the last one hundred years. We grew up in that environment of a very diversified farm. The income from the farm came from many sources. We had the hotbeds (selling the bedding plants) as well as crops of corn, beans, and wheat, as well as livestock of cattle, hogs, poultry and eggs, as well as vegetables of asparagus, rhubarb, tomatoes, sweet potatoes, and potatoes. It wasn’t hard work but very busy and demanding.”

In another nod to the Verhaeghe family’s agricultural heritage, development of community gardens at Verhaeghe Park is expected to take place this winter.

“It will be rentable space for individuals interested in having a garden plot,” Maasen said.

Procedures and forms for applying for garden space have yet to be developed, but watch for an announcement about the garden in late winter.

The 42-acrea Arthur and Betty Verhaeghe Park has an 11-acre developed area which encompasses the farm-themed playground as well as a picnic shelter, drinking fountain, parking, a large open play field, and a portable restroom. The park also serves as an access point for the Coffee Creek Streamway Park, which opened in October 2017 and currently stretches 3.4 miles from a western access near Shelters 9 and 10 in Heritage Park, to Switzer Road. The new park sits near the midway point of the streamway trail.