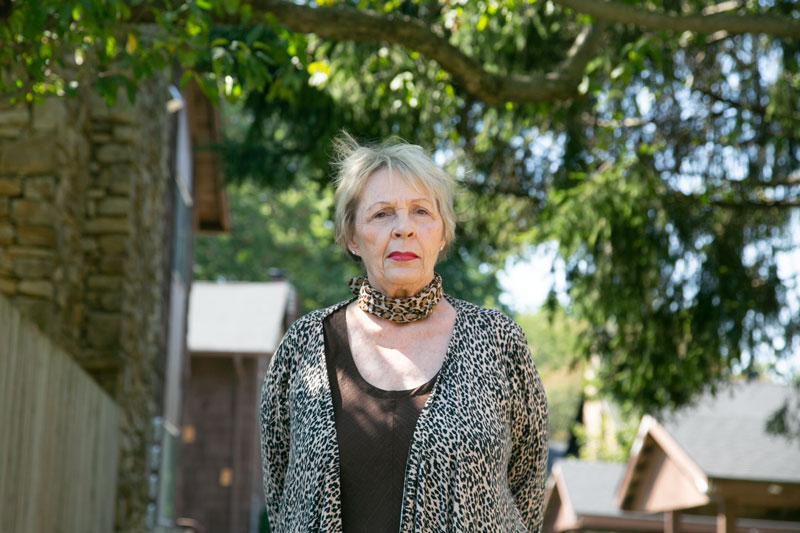 After being bought by Avanti Residential, Kenilworth Apartments residents like Judy Budihas, above, began receiving notice of non-renewals due to ongoing renovations. Now, residents — many of whom are elderly — are stuck deciding between a number of less than ideal options including moving from their homes or finding temporary housing for 30 days. Above, Budihas stands outside of Kenilworth.

Judy Budihas moved into a studio at Kenilworth Apartments, 4120 W. 94th Terrace, three years ago — and despite her initial apprehension, she quickly fell in love.

The complex, though not a senior living facility, had a reputation for being an informal community of seniors living independently.

Between the holiday parties, happy hours and the welcoming neighbors, Budihas said she found her home for the first time since moving out of her parents house years ago.

She decided Kenilworth would be the last home she lived in, but those plans have since been foiled.

After Denver-based Avanti Residential purchased the complex earlier this summer, the company embarked on a major renovation of more than 200 units in the complex.

And soon after, residents like Budihas began receiving notices saying their leases would not be renewed and, as a result, their residency at Kenilworth would be terminated, unless they moved back in at higher rents.

“It’s just a situation that I’ve had to accept,” Budihas said. “I hate this. I hate that I have to move. I loved it here, but it’s not going to be the place I moved into [after renovations]. It’s going to be a totally different atmosphere.”

According to the notices which residents received and which were reviewed by the Post, Avanti gave residents three options during the renovations.

First, Avanti said they could move out of their apartments for 30 days at the end of their lease term. For Budihas, that’s coming up on Oct. 18.

If they wanted to continue living at Kenilworth, they could re-apply and move back in once renovations are completed.

Avanti suggested that residents find temporary housing, by potentially staying with a family or friend, renting an AirBNB or checking into an extended-stay hotel.

Still, even if the residents did that and then moved back in, their rent at Kenilworth would increase with the renovations.

For Budihas, renting a renovated unit is going to amount to a 41% increase over her current rent. Right now, she pays $704 a month. That would go up to $994 a month for her studio — not counting the cost of utilities  and a pet fee.

The second option Avanti offered was to allow displaced residents to move into an already updated apartment unit, but Budihas said that would also come with a rent increase.

The notice said residents could temporarily opt out of renovations, but rent would still be increased to the amount of the other renovated units.

The last option — the one several residents, including Budihas, are reluctantly choosing — is to move somewhere else entirely.

Some residents like Budihas and her daughter Tracey O’Neill see the renovations as an act of ageism.

The Post talked with more than half a dozen elderly residents, some of whom agree with Budihas’ take that the renovations are meant to give the complex a facelift to attract a younger, professional class of renters.

Budihas said she and other elderly residents on fixed incomes aren’t financially able to move out for 30 days, find a temporary home, re-apply and move back in.

Even if she could afford moving out and then back in, with the help of her daughter, Budihas won’t be able to afford living at Kenilworth with the new rent increase.

After receiving her own notice of non-renewal, Budihas said she immediately told a downstairs neighbor, “It’s because we’re old.”

Ron and Mary Youngerman, who signed a lease at Kenilworth in May after moving from Nebraska, are in their 70s.

The Youngermans said they moved to Kansas City to be closer to one of their children following a couple of bouts with health complications last spring.

Rather than wait to find out if their unit is one of the 211 up for renovations, the Youngermans have already decided to move out of Kenilworth and are breaking their lease to do so.

Ron said he attempted to negotiate with Avanti to relax the fee for breaking the lease in exchange for a unit that could help a displaced resident, but he says Avanti never committed to anything.

An Avanti spokesperson told the Post via email that rental agreements are contractual and if a lease is broken, the associated fee must be paid.

“Our decision has already been made,” Ron said. “We’re going to have to break our lease and that’s going to cost a bunch of money, too, but not as much as if we had to move out and back in and such.”

Although some residents feel the way Avanti is handling the renovations is an attempt to push out Kenilworth’s longtime elderly population, the management company told the Post via email that “age has nothing to do with it.”

Brenda Gammie, Avanti’s senior vice president of operations, told the Post “the overwhelming majority” of the 60-year-old complexes’ units need to be upgraded.

The company “is investing more than $7 million” into Kenilworth to address “deferred maintenance, dated interiors and dated resident amenities,” she said.

Avanti is renovating 211 units total, and is aiming to renovate about 15 units a month, Gammie said.

It breaks down to about $30,000 per unit, but Avanti did not respond to questions about specific upgrades.

Randy Hall, another Avanti representative, told the Post via email the residents are so far giving on-site management positive feedback regarding the renovations.

Still, the newly renovated units can only accommodate so many displaced residents at a time. Gammie said Avanti will not help residents who are trying to find temporary housing pay for it during each renovation.

As for the rent increase, Gammie said there is not specific percentage range for increases in rent. Instead, Gammie said the increases account for whether or not the previous rent was above or below market rate, “plus a premium for the newly renovated units.”

Kristy Baughman, United Community Services of Johnson County director of education and planning, said 37% of renters in Prairie Village are cost-burdened. This means they are paying more than 30% of their income on rent.

While that’s two percentage points less than the countywide average, Prairie Village renters are paying, on average, $1,337 a month, while Johnson Countians are paying $1,109 on average.

If you’re making $30,000 or less a year and living in Johnson County, you’re much more likely to be cost-burdened by rent, Baughman said — and there are fewer options for affordable housing for those with lower or fixed income levels.

More than that, Baughman said individual health is an important part of the affordable housing discussion that is often overlooked.

“There’s such a close connection there between stable, attainable housing and the overall health of our community, particularly when we think about seniors,” Baughman said. “When we think about how many limited options are available across the county, where are people able to go and what options do we have.”

But UCS isn’t the only entity talking about affordable housing in Prairie Village.

The city’s newly-formed ad hoc housing committee met for the first time on Sept. 16 — and the Kenilworth renovations were a topic of discussion.

Mary Rimann, owner of Rimann Liquors in The Shops of Prairie Village, said a longtime customer told her his $1,400 rent is going to be an additional $500 as a result of the renovations.

Councilmember Bonnie Limbird said she talked about the situation with her sister, who works for a different management company. Limbird said she was informed the way Avanti is handling renovations isn’t standard practice.

“It’s not illegal, I guess, but it’s not what you would do to be a good business,” Limbird said. “Normally, you’d wait until somebody moved out, and then you would rehab one unit at a time. You wouldn’t just rehab 100% flux turnover and push people out, and that’s essentially what they’re doing.”

Deputy City Administrator Jamie Robichaud said while Avanti may not be using good practice, the current facility has its issues.

Code enforcement officers regularly visit the complex near 95th and Mission Road. A couple of weeks ago, Robichaud said, an officer was sent to Kenilworth due to sewage that had been in the basement for weeks.

“We want to enforce the code to demand that our tenants and our residents are living in quality housing, but when we start putting pressure on people that own it, this is kind of a result of that, too,” Robichaud said.

‘Not making it easy’

Aside from Budihas and the Youngermans, the Shawnee Mission Post spoke with seven other residents — all of whom asked to remain anonymous for fear of retaliation.

A few of those residents shared Budihas’ feeling — that the renovations are an attempt to push out the older residents.

Others say they feel it isn’t about age or the complex’s demographic. Instead, they say it is simply about a return on investment and being able to charge the maximum amount possible for rent.

While Avanti did not respond to questions about specific upgrades coming to Kenilworth, all seven residents who spoke with the Post anonymously, along with Budihas, said the renovations are simply cosmetic.

One resident said the apartment complex has been known throughout the years as a community for elderly residents living independently, even if it’s not a senior living facility.

Some residents have lived there for decades, the resident said, and are grappling with the need to uproot.

Either way, seniors like Budihas — who needs to be out by Oct. 18 and still hasn’t found another permanent place to live — and the Youngermans are struggling to figure out next steps.

“They’re not making it easy for us older folks to make this happen,” Ron said. “We’re not mad at them, we’re not even upset with them. We just don’t think it’s right.”