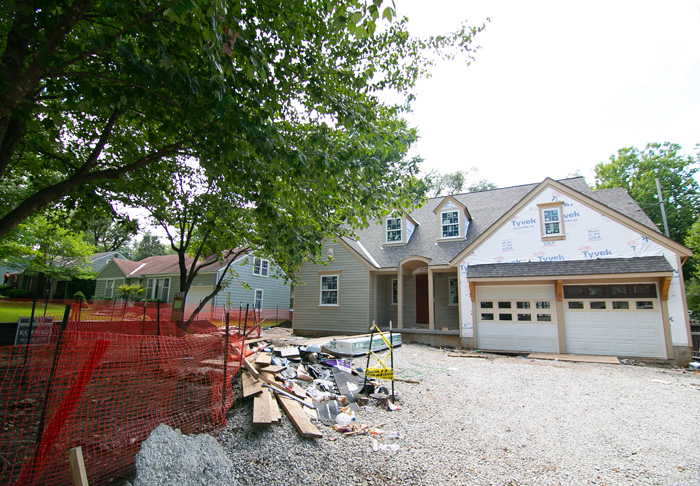 Prairie Village's ad hoc housing committee met for the first time this week and laid out some priority areas to study, including the trend of teardown-rebuilds in recent years, which have contributed to rising housing prices in the city. File image.

With housing prices continuing to balloon throughout Johnson County, a special committee established to examine housing affordability in Prairie Village held its first meeting this week and laid out a timeline for offering its recommendations to city officials.

Members of the Prairie Village ad hoc housing committee met on Thursday to discuss the body’s primary purpose — and why it simply exists.

Mayor Eric Mikkelson recently announced the creation of the committee, which is charged with developing recommendations to bring before the city council regarding affordable housing strategies.

Two of the committee’s main goals include

Mikkelson likened the housing committee’s role and responsibilities to those of the city’s diversity committee, which was established last year and has submitted about 20 recommendations to the city council. A few of those suggestions have already been adopted by the city council.

He added that some residents, who are averse to the term “affordable housing” and the idea of the committee itself, ask him “why he’s trying to change Prairie Village.”

The goal, he said, is not to change the city, but to uphold its values.

“We have always had a diverse housing portfolio,” Mikkelson said. “There have always been houses accessible to cops, teachers and young professionals just starting out — but we are losing that.

“Unless you want to become Mission Hills south and change Prairie Village — and some people might be fine with that and that’s a reasonable argument to have — but if you really are interested in a conservative approach to Prairie Village and what it has been historically, then we need to be proactive in Prairie Village with policy to keep it the way it is.”

The housing committee loosely discussed a number of items that could potentially help achieve its main goals, including accessory dwelling units and cottage communities.

The committee also discussed a number of issues it hopes to address through its work, including:

Additionally, the committee said it hopes to find ways to address issues older residents are having with the inability to age in place due to rising property taxes, a result of steadily increasing property values in recent years.

Prior to the next meeting, Robichaud will poll the committee members to see which issues are top priorities. This is intended to help the committee to prioritize recommendations over the next few months, before taking anything to the city council.

The committee also agreed to meet twice a month, likely on Thursday evenings. A schedule is yet to be determined.