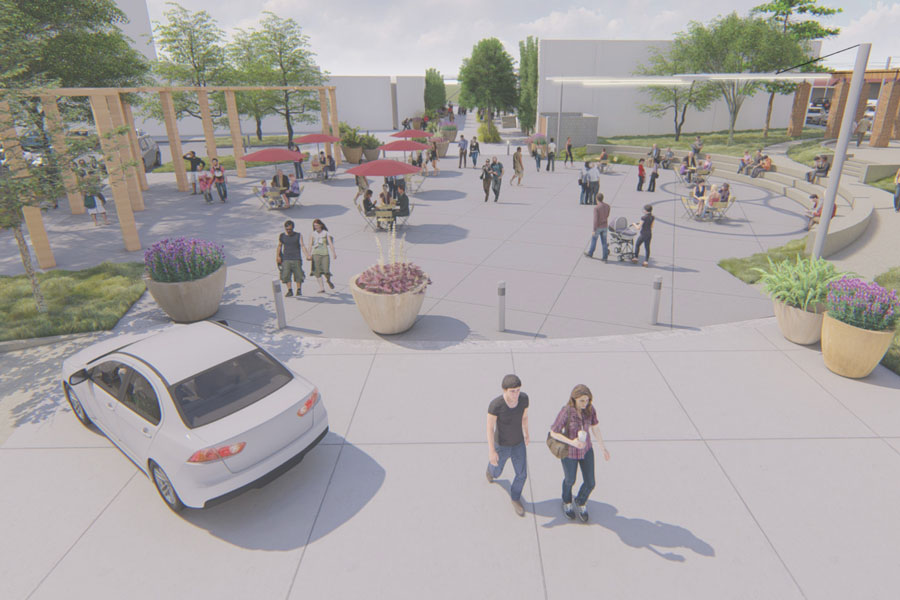 Preliminary conceptual designs for a pedestrian-friendly area in the Overland Park Drive alley downtown include a circular public plaza area between the iconic Clock Tower and the site of the current farmers' market pavilion. Above, a concept rendering of the plaza looking south along Overland Park Drive. Image via Confluence.

An alley that separates the Overland Park Clock Tower from the Farmer’s Market Pavilion downtown could get a new look that would make it more pedestrian-friendly on market days, once the rest of the market space is eventually updated.

At a city council committee meeting earlier this month, officials with the Downtown Overland Park Partnership presented some early ideas about what could be done with Overland Park Drive.

Their conceptual design includes new lighting, entrance way monuments, seating space, planters and other streetscaping intended to incorporate the service alley space into a better design for the market area.

The changes could make the area more accessible and flexible for other events, officials said.

“Right now we are dreaming big and waiting to see what comes from the request for proposals (for the market area) the city sent out [Friday, Sept. 3],” said Angie Mutti, executive director of DOPP, a nonprofit liaison with the city and community.

The Overland Park Drive alley runs past the back door of about a dozen businesses that face Santa Fe Drive.

Mutti doesn’t rule out burying the utility lines, but that will depend on the overall plan for the market and the budget.

Another notable feature of Confluence’s renderings was some new lighting and a large gathering space just east of the Clock Tower plaza and immediately to the west of the current farmers’ market pavilion.

Seating and perhaps umbrellas could be a feature of that space, Moyers said. The area could become more accessible by using a single plane of concrete for the street and removing the curbs, he said.

Confluence envisioned strings of lights zigzagging across Santa Fe Street. Circular lights could also be placed at Santa Fe’s intersections with 79th and 80th Streets, as well as a pedestrian crossing at the Clock Tower.

The circular lights also could illuminate the new gathering space and the south end of Overland Park Drive, with more streetscaping on the short stretch between the drive and Santa Fe.

So far these are just concepts and not a full architectural plan. The new streetscape is being brainstormed along with other plans for improving the original market space.

The market pavilion has a number of shortcomings city officials want to address, such as its crowded layout and a slope that makes it difficult for people with mobility issues to navigate.

On Sept. 3, the city put out a request for proposals to reimagine the market space and invited neighboring property owners and developers to chime in with possibilities that could include a bigger mixture of uses.

Interested persons can give their ideas at a forum Sept. 28 at the Matt Ross Community Center or through the city’s website.