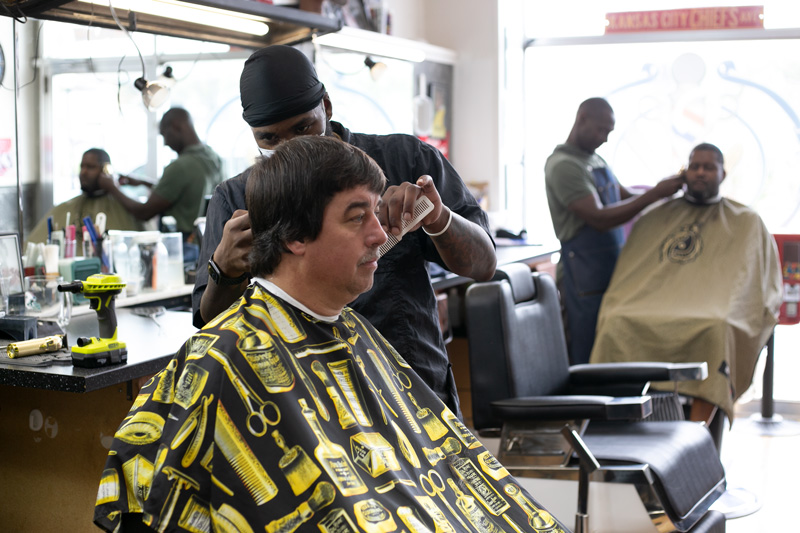 The owner of JC Barber and his crew of barbers have big plans to expand into the space next door on Johnson Drive in downtown Shawnee. Above, Derrick Saunders (left) and Antony Chege) at work with their customers.

JC Barber is getting a new and bigger barbershop in downtown Shawnee.

Located at 11109 Johnson Drive, the space has been a barbershop for decades.

But now, Antony Chege, who has been the shop’s owner since 2017, and shop manager Derrick Saunders have big plans to expand into the space next door, which will be immediately next to the Shawnee State Bank building, which is currently undergoing a major facelift.

“For me, it’s growth,” Saunders said. “From where we started, coming right out of barber school to not really knowing what barbershop I was going to be in two-and-a-half years ago to where I am right now, it’s growth and it’s just our appreciation to all of our customers that come in and support us.”

The current space, which is owned by the Shawnee Masonic Lodge, features four chairs for haircuts, hot lather and shave and other hair treatments and stylings.

All of those services will move into the new space next door, which will remain under the JC Barber brand with at least seven new chairs, a washing station and other amenities.

Meanwhile, Chege will keep the current space and convert it into a salon for braiding, cornrows and dreads.

To fill all the spaces, they will be hiring. Chege and Saunders also hope the new space will make customers feel more comfortable, especially in the age of COVID-19 and social distancing.

Construction on the expansion started at the end of August, and they hope to open the new shop by mid-October.

Chege said he’s proud of how the new shop will play off old touches, exemplified in the exposed 111-year-old stone wall in the new space that was recently uncovered as the building undergoes restoration.

“My thing is this barbershop was to bring the old traditions back, old to new,” Chege said. “We want to keep it up.”

Here’s a video of the new space under construction:

‘Best of both worlds, right next door’

In another life, Chege was a traveling nurse before going to barber school.

When the downtown Shawnee storefront, which had most recently been the home to Jose’s Barbershop, was up for grabs in 2017, Chege happened to drive by and see that it was available.

“When I was in school, Jose’s son, I was going to school with, and he mentioned they were moving,” Chege said. “So he mentioned it to the wrong person, or the right person, either way. It’s one of those things that catches your eye.”

JC Barber is Black-owned and offers many services particular to Black customers, but Saunders said they take pride in offering high-quality services for everyone, including Black and Latino customers who may have a long drive to find a salon that can serve their styling and hair treatment needs.

“Just with the diverse community around here, it’s just very important,” Saunders said. “Because you might have a mixed couple that might have a daughter whose hair is a little more kinky, and they have to go way north to Kansas City to get their hair done. Now, you don’t have to do that.

With all this additional space, Chege said he hopes to save a booth for the weekends for students to use to help them get acclimated to a real-world work environment before they graduate.

“Me and Derrick, we strongly agree that when were in school, we didn’t get the right education of what happens when you come out of school,” Chege said. “It’s very hands-on, but it’s how to engage, how to interact, how to relate with the customer.”