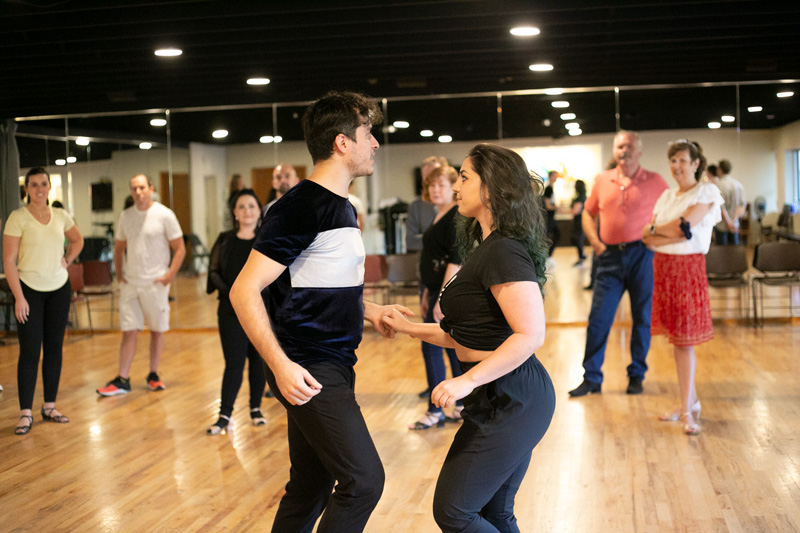 Jesse Lopez, left, and Ariel Peck lead a class of dance students in West Coast swing dance on a recent evening at Viva Social Dance Studios near downtown Shawnee. Lopez and Peck together form Body Language Culture and teach a variety of dance styles locally and around the U.S. “The primary emphasis is not where your feet go or the moves that you’re doing. It’s about having fun with your partner and having fun yourself," Lopez said. Photo credits in this story Leah Wankum.

As dusk fell over downtown Shawnee one recent evening, the night was just getting started for some local dancers.

Body Language Culture, a metro dance organization that also teaches classes, was hosting one of its usual social dances after lessons wrapped up. And energy was running high.

On this night and many others, dancers from all across the Kansas City area come to Viva Social Dance Studios in downtown Shawnee, not just to learn dance but to be part of a growing community.

“Dancing is healthy; it is so much fun,” said Cheryl Palmer of Kansas City, Kan., who has been a student there for six years. “I have made the best friends here, so just knowing that I have a community that is here to have fun with, support me, help me grow as a person, it’s why I keep coming back.”

Heading up that community are Jesse Lopez and Ariel Peck, a couple who teaches West Coast swing and other dance styles through their dance-focused Body Language Culture.

“We intentionally have redesigned our teaching basis to be built upon the language art of West Coast swing, which is to say the communication that we’re trying to give each other, rather than the technically correct dance positions,” Lopez said. “The primary emphasis is not where your feet go or the moves that you’re doing. It’s about having fun with your partner and having fun yourself.”

Pack chimed in, “It’s dispelling the fear of dancing by taking [out] the technicality of being perfect and good at it, and more so just, ‘Hey, you’re learning how to communicate a different way, it just happens to be with your body and dancing instead of with words.”

Their approach must be working. Since relocating from the now-closed Mélange studio in downtown Mission — the pair have seen more and more people show up for their classes and social dances.

It’s helped that their move has also coincided with wider availability of the COVID-19 vaccine.

They’ve gotten through months of adjusted operations in order to keep dancers safe and comfortable during the pandemic.

“Funny enough, I think what kept us alive during COVID was actually new people coming to the studio rather than more of our seasoned dancers,” Peck said, laughing. “A lot of people were really frustrated with being home, and so they were out looking for something to do, and a lot of them found us through that avenue.”

Several dance students said they respond well to Lopez’s teaching approach in West Coast swing because he places more emphasis on building a connection with your dance partner and less on structured steps and dance patterns.

“It’s a dance that actually has a conversation to it and a connection that no other dance I’ve ever done has,” said Ashley Meeker, a student, who off the dance floor is a teacher from Raymore, Mo.

“A lot of dances are structured to pattern, and you have to follow that, regardless; where this is very free flowing and free-spirited,” she said.

‘The power of touch’

Lopez has offered dance instruction under different names for the past several years, but he and Peck have operated as Body Language Culture since moving to Viva Social Dance Studios earlier this year.

Dancing is an inherently social activity, something that, in a way, has been therapeutic for Lopez’s and Peck’s students.

Human connection and physical touch are key ingredients for Body Language Culture and its dance community.

“The power of touch, the power of literally dancing with another person, is a healing mechanism for that, and I cannot impress the importance enough of someone learning how to just hold another person’s hand and let them be a safe place for them,” Lopez added.

For Meeker, the teacher from Raymore, Body Language Culture has become like a family, a community where everyone has each other’s backs during challenging times.

“Everyone from Thursday nights at the studio, you can call them at the drop of a hat and we’re all ready to go with each other somewhere,” Meeker said. “This community is so strong because of the great leadership and teachers that have kept it that way.”

If you are interested in seeing what Peck and Lopez have been up to recently, check out this online competition video of Peck and Lopez.

Viva Social Dance Studios first opened in 2017 in the site of the former Nallia dance school at 5722 Nieman Road, when owner Josh Hernandez, a self-taught dancer by way of Puerto Rico and New York City, relocated the studio from downtown Mission.

Hernandez is particularly proud of the studio’s original dance floors (which have remained from Nallia) and the sound system, which was originally from the Kansas City Swing Club.

Much of Hernandez’s love for dancing comes from his roots where he grew up in the Bronx — think “In the Heights,” a song-and-dance movie featuring actors he recalls growing up with — but he also learned East Coast swing and ballroom dancing while in graduate school at Kansas State University.

The COVID-19 shutdowns, he admits, have been hard on local dance studios.

Two studios in Johnson County permanently closed in recent months. Viva is one of only a few social dance studios left in the area.

“The pandemic has been rough. My attitude was: I’m either going to make it work, or I’m just going to go out trying,” Hernandez said. “I was given the opportunity to sell and get out of the business with some losses, and I turned down the opportunity.

“I have found over the years that, talking to students, it is true: dance is a form of therapy, and we get people who just need to get away from their typical 8-to-5 life and interact with other human beings. I found that with the pandemic, everything being shut down, people were just isolated. They needed the opportunity to interact with other people. We all need that.”