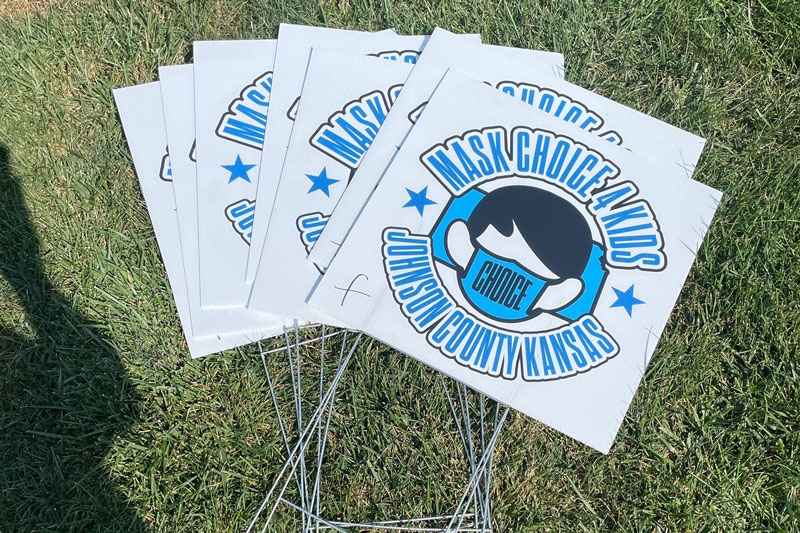 Mask Choice 4 Kids signs, which appear to be related to a Facebook group with the same name, appeared across Johnson County over Labor Day weekend. Many signs have since been removed because temporary signs aren't allowed in public right-of-ways in most cities — unless they're political signs and it's at least 45 days before an election. Photo via Ian Shea-Cahir Twitter.

But just as quickly, they disappeared.

The signs seem to be connected to a Facebook group that goes by the same name as the message on the signs, “Mask Choice 4 Kids.”

That group, which has more than 5,000 followers, is labeled a “youth organization” on Facebook. In its description, the group says its mission is to “give children and parents the CHOICE to wear masks in school.”

The group promotes events, including each Wednesday, when participants are encouraged to don “Mask Choice 4 Kids” T-shirts and wear them in “your school and community.”

It also encourages middle and high school students every Tuesday to take off their masks at school during 1st period as a way to “peacefully disrupt the educational system [in order] to see change.”

The group did not respond to multiple requests for comment for this story.

The Post began getting tips Friday about the signs’ appearance in multiple northeast Johnson County cities.

The signs bore the message “Mask Choice 4 Kids” and a logo similar to one seen on the Facebook group’s page of a featureless face wearing a mask imprinted with the word “choice.”

According to tips, social media posts and Post staffers’ own observations, the signs were spotted in Prairie Village, Shawnee, Roeland Park and Overland Park on Friday and Saturday, including immediately in front of Highlands Elementary School, a public school at 6200 Roe Avenue.

Since the signs were largely placed in public right-of-ways, which goes against all the cities’ codes regarding signage, city staff and private citizens are legally allowed to remove them, officials say.

That appears to be what happened over the weekend. By Saturday, nearly all the signs that had previously been observed were gone.

Private citizens must’ve also taken some down as more were removed over the weekend, he added.

Reilly said if city staff gets a complaint about the signs or sees them while driving by, they’ll “take appropriate action.”

The Shawnee Mission School District did not immediately respond to requests for comment as to whether or not Highlands Elementary officials have given permission for signs on its property.

The “Mask Choice” signs in front of the school were gone by Saturday but signs for other groups and events remain.

Other signs and complaints

Shawnee resident Ian Shea-Cahir said he removed signs that he saw over the weekend. He tweeted on Saturday to the city of Shawnee and the police department:

Note to @CityofShawneeKS and @shawneeKSpolice: these political signs going up on public property violate the state and city law. I will be removing them without remorse in places where it is safe. I recommend someone find out their support group and teach them the law. pic.twitter.com/ViZ3LJB9TE

Still, state law says political signs can’t be regulated in the right-of-way adjacent to private property up to 45 days before an election, Robichaud said, which is why campaign signs may still be clearly visible on busy roadways like Roe Boulevard and 75th Street.

Regardless of content or time period, Robichaud said signs are not allowed in the right-of-way adjacent to public property like city parks and facilities. This is true for both Overland Park and Roeland Park, as well, despite each city having its own additional codes for signage.

Herring wrote that he has “too many friends” in the hospital due to COVID-19, and that while the signs seem to be kid-friendly, they’re the opposite in his estimation.

“Caring about your children includes caring about their well-being and the well-being of their parents, and masks are one of an essential group of tactics to fight this pandemic, including vaccination including social distancing including basic sanitation measures,” Herring wrote on Facebook. “This kind of messaging is not kid-friendly at all.”

Currently, all major public school districts in Johnson County require masks be worn by everyone inside all their facilities.

A countywide public health order requires universal masking in all schools — public and private — that enroll students up to and including 6th grade.

A lawsuit filed last week on behalf of a Blue Valley student challenges that mandate, arguing the county commission should review the order every 30 days.