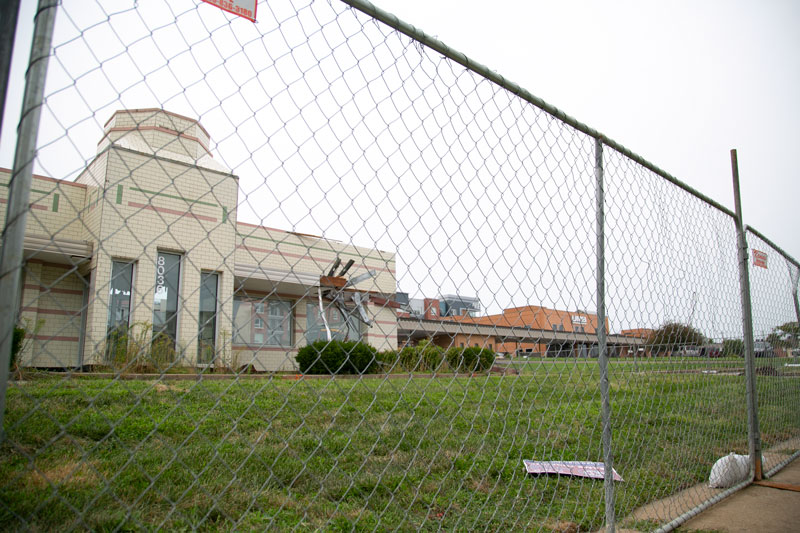 The former Winstead's on Metcalf Avenue near downtown Overland Park is being demolished to make way for a temporary UMB Bank. The bank company is launching a major renovation of the lot on the southwest corner of 80th and Metcalf that will eventually include a new branch and a public plaza, according to city documents. Above, crews worked last week to demolish the Winstead's building. Photo credit Juliana Garcia.

Crews are tearing down the former Winstead’s restaurant in downtown Overland Park.

The lot has sat vacant ever since, but the old diner is now being demolished to make way for a temporary bank — in connection with a larger project to remake the southwest corner of 80th and Metcalf.

UMB Bank on the adjacent lot at 7109 W. 80th Street is planning to undergo a major remodel with plans to reduce the size of its current building and put a public plaza near the busy intersection.

While that project is happening, a temporary UMB branch will take over the site of the former Winstead’s for a two-year period, according to city documents.

Although the former burger joint’s building with its recognizable white tile exterior is being demolished, the temporary bank will use the restaurant’s drive-thru during the reconstruction process, according to city documents.

Crews will use a blue metal pitched roof and exterior insulation and finish system, or non-load bearing building materials, for the temporary bank, according to city documents.

UMB Bank’s renovation of the entire property will result in a smaller bank branch, with plans to replace the current building of 44,420 square feet with a branch that is 12,155 square feet.

The end result will be a mostly one-story structure with a second story along Floyd Street to the west.

A parking area is planned for east of the new bank building, and a roadway connecting Metcalf Avenue to Floyd Street.

New sidewalks, landscaping and lighting will also be part of the project, according to city documents. Additionally, there’s plans for the plaza area at the corner of 80th and Metcalf.

The new permanent UMB Bank and plaza will also result in the removal of the “Overland Stage” sculpture currently at the corner of 80th and Metcalf.

The owner of Winstead’s filed for bankruptcy last year.

The ’50s style diner, known for its steakburgers and signature Skyscraper soda-and-ice-cream treats, at one time had about a dozen franchises in four states.

The Overland Park franchise was one of the last metro locations before it closed in 2017.

Now, the location on the Country Club Plaza in Kansas City, Mo., along with another Overland Park location near I-435 and Roe are the only Winstead’s still in business.