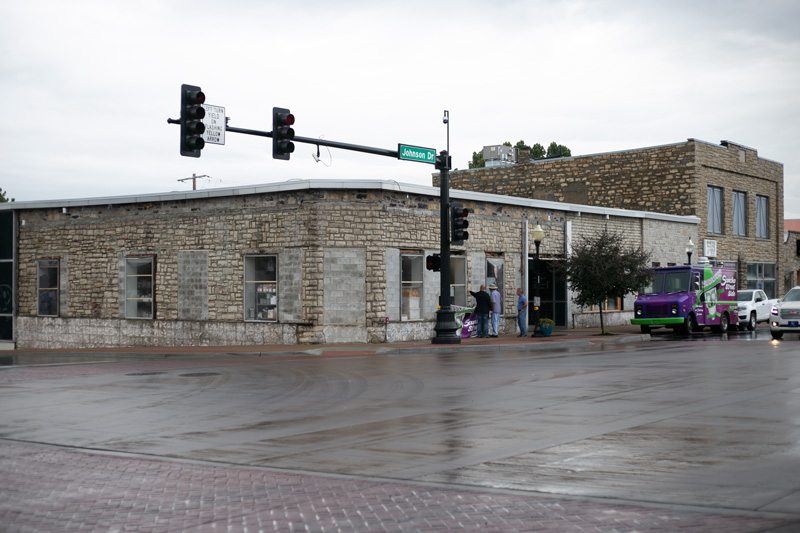 The Shawnee State Bank building has stood in downtown Shawnee for more than a century and is getting a major facelift. The owner has started removing the modern glass-and-steel wrapping to expose the structure's original stone facade.

For the first time in perhaps half a century, the original stonework of a historical building in downtown Shawnee is once again visible.

Since 1909, the Shawnee State Bank building has stood in downtown Shawnee at Johnson Drive and Nieman Road. Now, under the direction of the property owner, Dan Pflumm, the building is getting a major facelift.

“The idea is to make it like the cornerstone of downtown,” Pflumm said. “It has a lot of that already; we just kind of expose it and make it look as good as possible and get it back to, hopefully, close to what it was 111 years ago or so.”

Pflumm hopes to attract a local restaurant company to move into the space once it’s complete.

The current tenant, Sancho Streetside, will vacate the space by the end of October and move into the old site of Garrett’s, a neighborhood bar at West 65th Street and Nieman Road.

Here’s a conceptual design of the plans:

To get the building how Pflumm wants it, he’s investing $1 million into the project.

Last month, he received approval from the city of Shawnee to be reimbursed up to $300,000 out of the city’s economic development fund.

Renovation on the Shawnee State Bank site is beginning at nearly the same time as similar work on the old Hartman Hardware building catty-corner at the busy Johnson and Nieman intersection.

And all of these projects follow a flurry of economic activity in recent years to rebuild downtown Shawnee, a particular focus for the business community.

“It’s been great; we’ve worked with Dan for, gosh, I don’t know, a year and a half, maybe longer, on this vision of what that corner could be,” said Ann Smite-Tate, president of the Shawnee Chamber of Commerce. “It’s such an important building, not just to downtown really, but it’s really an important building in Shawnee history. So to have that restored, we’re very excited. I think it’s kind of a catalytic project. It’s going to look good.”

Pflumm wants to hire a local stonemason as well as Kelly Construction Group of Grandview, Mo., to handle the renovations, which include:

That’s all part of the first phase of renovation. The second phase includes replacing the glass and steel facade on the back half of the building, which is a few decades old.

“It was probably really cool back when glass was the in thing, and the bank probably wanted to be more modern,” Pflumm said.

Chartered in 1908, the Shawnee State Bank occupied the stone building at Johnson and Nieman from the building’s completion in October 1909 through the 1997 merger with the Commerce Bank system, according to bank documents in Pflumm’s possession.

The stone building was built around the same time as the Caenan Castle just west of downtown Shawnee on Johnson Drive, which reopened last year as restaurant and winery outlet.

In August 1955, Clarence Henry Pflumm, Sr. also served as president of the bank.

After the bank closed in May 2011, Dan Pflumm repurchased the building from Commerce Bank.

Since then, the building has had a handful of tenants over the years, most recently Sancho Streetside, a street taco food truck company, and Sweet T’s, a bakery and barbecue venture.

As far as interior design, Pflumm said a new restaurant tenant could have “a lot of leeway, as long as it doesn’t change the integrity of the building.”

“We just want to make the area a really cool destination,” Pflumm said. “But we want to try to preserve as much of that history that’s behind all of the glass and material.”