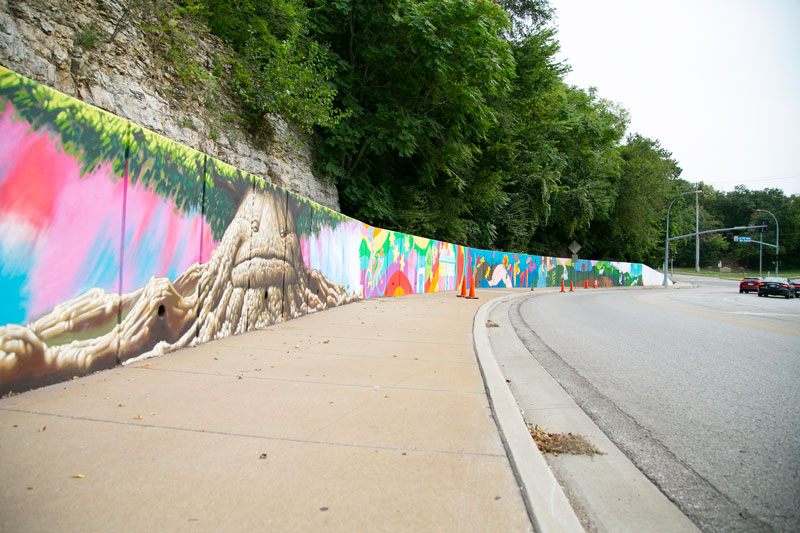 The 47th Street mural in Roeland Park, above, is a work in progress — but organizers say the 311-foot work is on track to be completed by the end of the month. An image of a tree is placed towards the center of the mural, symbolizing the city's slogan, "Uniquely Rooted." Photo credit Juliana Garcia.

The city of Roeland Park is working on a 311-foot mural near the border with Wyandotte County — and it’s on track to be completed by the end of the month.

After years of working toward a community-driven mural, the Roeland Park City Council gave the arts committee the green light, and some funding, for a $36,000 mural on Roe Lane and 47th Street.

Marek Gliniecki, the city’s arts committee co-chair, said the goal is to end up with a colorful, inviting mural with interesting imagery.

“It represents the community,” Gliniecki said. “It’s kind of near the edge of our city, so people coming in and out along that route will be able to get a sense of our community through the mural.”

A large tree is the centerpiece of the 47th Street mural, which is a homage to the city’s mantra: “Uniquely Rooted.” Alex Eickhoff is the artist who painted the tree on the mural.

While planning and design started back in July, Noriega said the team began painting at the beginning of August. The end of September deadline is self-imposed, Noriega said.

Noriega said she thinks the mural is “a great opportunity to bring the community together.”

“It’s a very public project, right,” Noriega said. “Everyone is getting a chance to go see it, talk about it. I just think it’s a great piece to bring us together and start a conversation, especially about some important topics that are happening.”