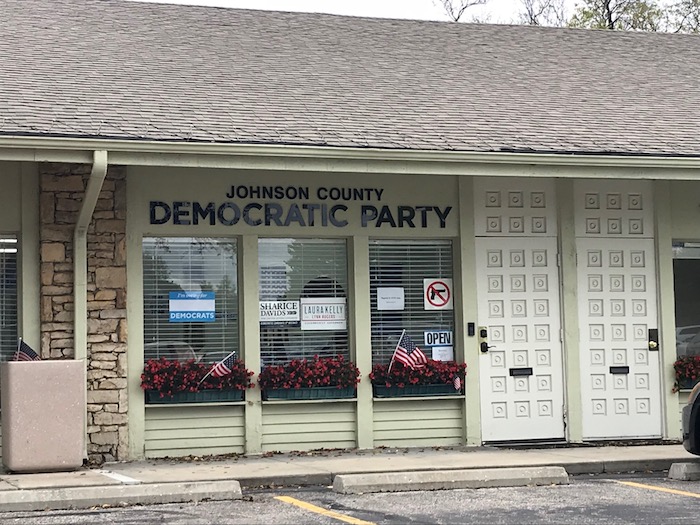 Overland Park police officers were called to the Johnson County Democratic Party offices on 75th Street Thursday, responding to a report that a man had entered the office using foul language and acting in a threatening manner. A police spokesperson said the man had called the office before coming in person, complaining about vaccines and mask-wearing. File photo.

Overland Park police officers were called to the offices of the Johnson County Democratic Party on Thursday to investigate a “verbal disturbance.”

When officers arrived outside the offices in a strip mall in the 8900 block of 75th Street, they encountered a man who had reportedly entered the office using foul language at the staff.

Off. John Lacy, the Overland Park Police Department’s spokesperson, said in an emailed statement Friday, “Prior to the [man’s] arrival, he called the office upset about ‘wearing a mask’, and ‘vaccinations’ and was seeking information regarding obtaining a job, according to call notes.”

Lacy said the man told officers a person at the Democratic Party office used “foul language” at him over the phone, “so he drove up to speak with her face to face.”

An employee did admit to cursing at the man over the phone and apologized, according to Lacy.

The employee told police that when the man called the Democratic Party’s office, he was playing a song in the background that was saying, “Kill Biden.”

Mitchell said the office has received several calls over the past week that were either “threatening” or a “nuisance.”

“Last week we had a threatening phone call from an unknown number. We called the OPPD but no report was filed. We also had several nuisance calls last week from a different caller,” Mitchell wrote in an email.

Mitchell said the man who showed up yesterday had called five or six times on Thursday before showing up in person.

Lacy said no arrests were made Thursday and that call notes indicate the man might have also been suffering from “mental illness.”

“Officers on scene informed the male they would do some research and speak with him about places he could contact for employment,” Lacy said in an email. “The male was also advised to write his congress[person] a letter instead of coming up to the facility.”