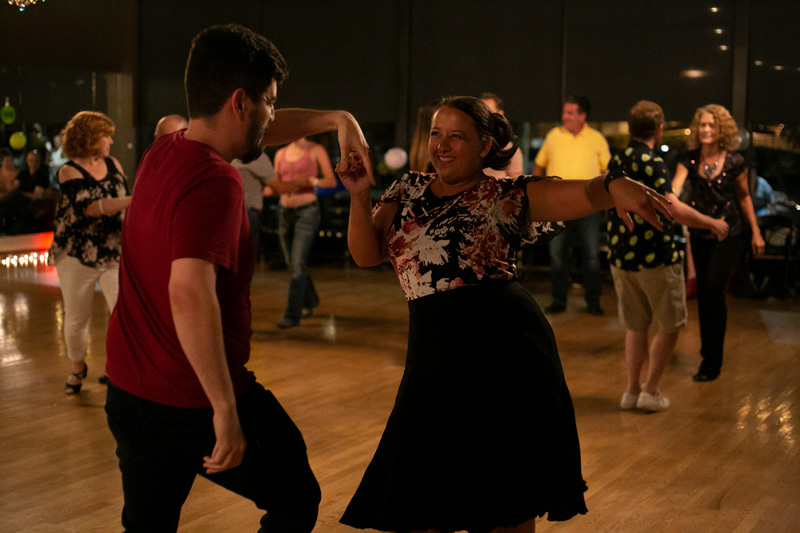 Mélange Dance and Events was a social dance studio in downtown Mission on Johnson Drive. Financial strains caused by the COVID-19 shutdowns led the owner to close the business and sell the building. Above, dancers gathered for one final West Coast swing dance party on Tuesday night before the place officially shut its doors. Photo credit Leah Wankum.

Located at 5636 Johnson Drive, the building on the northeast corner of Reeds Road has served as a dance studio for seven years, mostly under the ownership of Olathe couple Clark and Jaye Davis.

Last spring, at the start of the COVID-19 pandemic, the couple retired and sold the business and building to Julie Murray, also of Olathe, who was a ballroom dance student there as well as a competitive dancer.

Murray said financial complications from the COVID-19 shutdowns — which resulted in virtually no event bookings — partially contributed to her decision to close the business and sell the building.

“It’s been a struggle from the beginning for me,” Murray said. “When I purchased it, I knew I needed events to make it work for me financially.”

But Murray happened to take over in February 2020, just weeks before the pandemic’s impacts began being widely felt in the Kansas City region.

She also had no employees, which meant she couldn’t qualify for federal relief from the Payment Protection Plan.

Murray said she will focus once again on learning ballroom and dancing competitively.

“It’s bittersweet; lots of mixed emotions,” Murray said. “It’s kind of a relief that I can go back to strictly being a student now. I don’t have to worry about people having a place to come to practice their dancing or take their lessons or do any social dancing. Me personally, I can just take a step back and worry about myself again for a little bit.”

The building, which is immediately adjacent to Brian’s Bakery and is in the same commercial strip as Sandhills Brewing and Urban Prairie Coffee, has been listed on the market at $750,000.

A local company is managing the sale, which is under contract for the next two months.

Mélange is the second local dance studio to close since the COVID-19 pandemic hit. Overland Park Ballroom also closed earlier in the pandemic.

“The dance community was hit, obviously pretty hard, with COVID, and I tried to keep it open to have a place for people to come, especially during the pandemic,” Murray said. “Because dance is inherently social, and when you’re trying to social distance, it’s very difficult.”

As an independent dance studio, Mélange rented floor space to 12 instructors and also hosted large events such as wedding receptions.

The social dances on Friday nights were wildly popular, with ballroom dancers and swing dancers practicing their moves and visiting with each other.

Mélange briefly shut down last year and then reopened with a mask requirement.

Things started to look up when vaccines became widely available at the start of this year, Murray said, but participation dropped again with this summer’s surge of the more contagious Delta variant.

That’s when Murray knew she had to make a final call.

“For me personally, I think it’s kind of coming at the right time, because I don’t think I could do another year of a modified version of the business for myself financially and emotionally,” Murray said. “It was just quite an undertaking at this time.

“And we’re down to only a few [other] studios now, which, trust me, that weighed very heavy on me, but in the end, I had to do what was best for me,” she added. “I don’t think it’s hit me yet, it’s still kind of fresh.”

Some dance instructors formed a collective called The Ballroom KC after the Overland Park Ballroom shut down. Those instructors will teach for a short time at The Culture House in Oak Park Mall and other places.

Elizabeth Watkins, a dance instructor with The Ballroom KC, said COVID-19 has been difficult to navigate. And Mélange’s closure has reinforced those challenges.

“It was especially hard since it was a huge part of my dance journey in KC,” she said. “As West Coast swing dancers, we have had a weekly dance there since 2014 or 2015. So losing that space is hard, but I keep saying it’s not only about the space; it’s about the people. So we will keep dancing.”

A video of the final dance at Mélange is below and on YouTube.