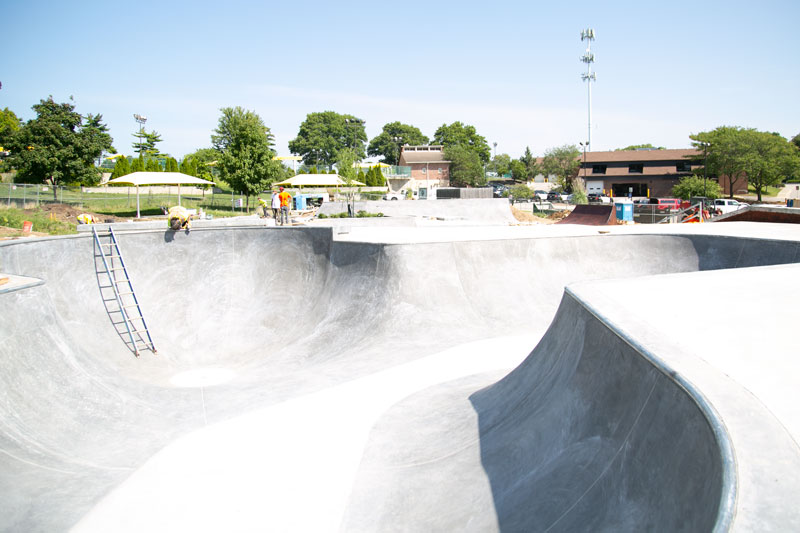 Harmon Park in Prairie Village is gearing up for a Sept. 15 ribbon cutting for the renovated skate park, pictured above. The renovation project is years in the making, and will feature new bowls, an upgraded stage area and a memorial plaque.

The revamped skate park at Prairie Village’s Harmon Park is nearly ready to be officially unveiled.

After years of discussing and working on a renovation, the city of Prairie Village will host a ribbon cutting for the new park on Wednesday, Sept. 15 — but Public Works Director Keith Bredehoeft said he’d like to open the park up before the ceremony.

There is no set opening date at this time, however.

The skate park closed on April 5 for demolition and construction to begin, and the city’s public works department aimed for a mid- to late August opening.

Below are the features skaters can find at the revamped skate park:

In addition, there will be an upgraded stage area, which will host future Jazz Fest events, just as the old park did.

The same memorial sign from the former park will also be on site, Bredehoeft said. It will feature history about the original skate park, as well as information on the renovation.

Bredehoeft said he and the entire public works team is excited about the new park, since it’s not often they get to work on this type of project.

After seeing skaters at the old park during every season, Bredehoeft said he knows there’s excitement for the new park — and while it will open in time for this coming fall, it will remain open and can be used year-round.

“We’ll have a good fall for skating. And winter, because like I said, they skate all year round,” Bredehoeft said.