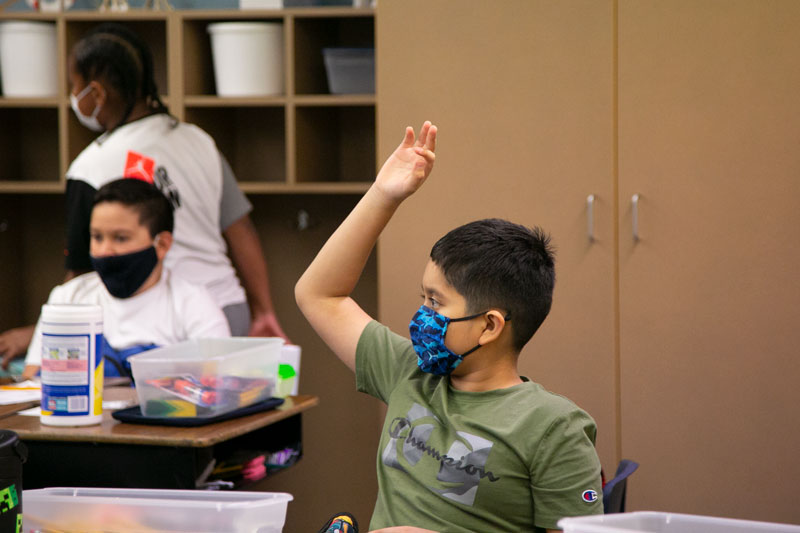 The Kansas Supreme Court has stayed a Johnson County judge's ruling that a COVID-19 emergency powers law is unconstitutional. The case originated in two parents' challenge to the Shawnee Mission School District's mask requirements last school year. This new school year, the district has universal mask rules in place once again and says the stay will not impact those requirements. File photo.

CORRECTION: The original story incorrectly  attributed some statements to the Kansas Supreme Court that were, in fact, contained in Attorney General Derek Schmidt’s brief. We regret the error. The high court granted the stay and has not weighed in on the merits of the case at this time.

The Kansas Supreme Court last week granted a stay in a Johnson County judge’s ruling that a pandemic emergency powers law is unconstitutional.

Why it matters: The ruling temporarily puts a hold on Judge David Hauber’s ruling that the law, known as SB 40, violated the separation of powers and the due process rights of the Shawnee Mission School District.

But SMSD officials say the stay will have no immediate impact on the district’s COVID-19 mitigation measures currently in place, including a universal mask rule in all schools.

The details: The Supreme Court issued the stay on Monday, Aug. 24.

In his brief arguing for the stay, Attorney General Derek Schmidt agued that Judge Hauber did not need to rule on SB 40’s constitutionality in the SMSD case because the law expired in June when a Republican-led group of legislative leaders opted not to extend a statewide state of emergency.

“The district court’s actions — a self-initiated constitutional controversy over moot questions resulting in a dramatically overbroad decision — were entirely improper,” Schmidt’s office wrote in its brief.

“The district court’s ruling had created unnecessary confusion about Kansas emergency management laws at a time when the rise in COVID cases makes certainty and stability in the law even more critical,” Schmidt’s office said in a statement.

The original case: The case originally involved two parents’ challenge to SMSD’s decision this spring not to give them public hearings under SB 40’s provisions, when they complained about the district’s mask requirements for students.

Hauber not only sided with SMSD in saying that the parents’ complaints were not timely (coming towards the end of a school year in which mask rules had been in place for months), but he went further in questioning SB 40’s constitutionality.

He called on Attorney General Schmidt to weigh in on the larger SB 40 issue.

Schmidt’s office filed briefs defending SB 40’s constitutionality but also arguing that the issue was moot since the law was no longer in effect following the expiration of the state of emergency.

A few weeks later, Hauber ruled that SB 40 was unconstitutional, arguing in part that the law remained a threat to school districts if another state of emergency was declared in the future.

What happens next: The Supreme Court has asked new briefs to be filed in the case by Sept. 16.

In a statement, SMSD chief communications officer David Smith said the district was “disappointed” with the Supreme Court’s decision to grant a stay.

“However, as a practical matter, the stay will have no impact on school districts unless a state of disaster emergency related to COVID-19 is declared,” Smith wrote.

Read the stay order and attached brief from Attorney General Derek Schmidt below: