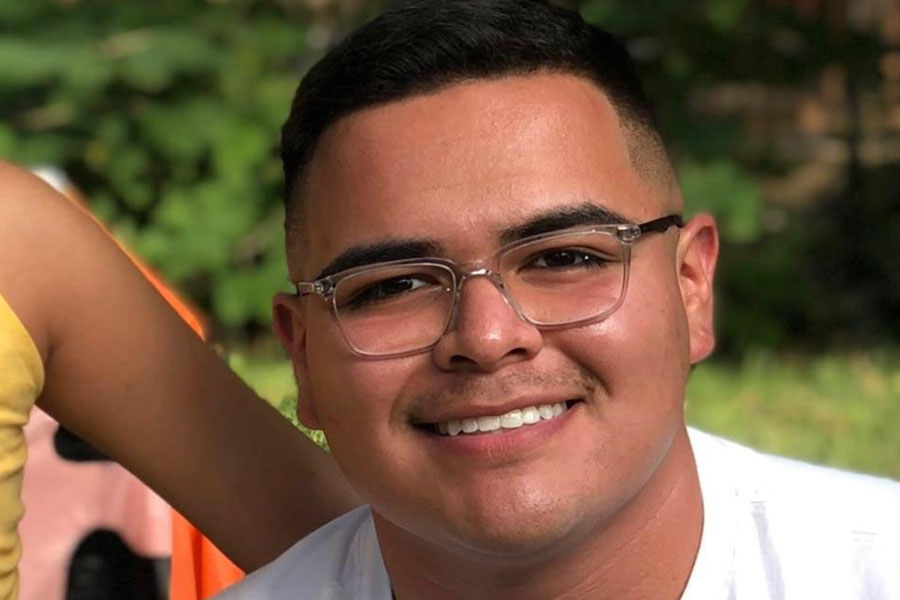 Freddie Castro, 23, first tested positive for the disease in mid-July and is now in ICU care on a ventilator, according to police officials. "His condition now is such that doctors say he will not survive without a ventilator and his organs are failing," a statement from the Overland Park Fraternal Order of Police, Lodge 21 said. Photo via the Overland Park Fraternal Order of Police's Facebook page.

A young Overland Park police officer is critically ill with COVID-19, according to police officials, and may not survive without significant ongoing medical interventions.

Freddie Castro, 23, tested positive for COVID-19 in mid-July after suffering from cold- and pneumonia-like symptoms, according to a Facebook post published early Friday morning by the Overland Park Fraternal Order of Police, Lodge 21.

In the hospital, the FOP said, Castro’s condition “worsened drastically.” He was moved into ICU care and put on a ventilator and has suffered “multiple heart attacks and strokes.”

“His condition now is such that doctors say he will not survive without a ventilator, and his organs are failing,” the FOP post said.

Two fundraisers have been posted online in the past 24 hours to support Castro’s family’s medical bills.

One fundraiser is through the Overland Park Police Officers Foundation, and another is a GoFundMe page created by a Castro family friend.

Anyone donating to the police foundation website is told to make sure to select “Officer Freddie Castro” in making a donation.

The city of Overland Park recently issued new masking directives amid the ongoing surge of cases brought on by the contagious Delta variant.

Meg Ralph, digital communications supervisor with the city manager’s office in Overland Park, said Police Chief Frank Donchez issued a rule for his department on Tuesday, Aug. 24, requiring unvaccinated police employees to wear N95 masks and safety goggles when indoors, in vehicles and when working with the public.

The police directive supplements a city policy issued Aug. 4 requiring all city employees to wear masks indoors when they are not at their desk or office, including during in-person staff meetings, in a vehicle on city business, and at council meetings and while interacting with the public, Ralph said.

Both of those rules were implemented after Castro first became ill.

Officer John Lacy said the police department is allowing officers to maintain privacy about their vaccination status. As a result, Lacy said as of Friday he did not have information on whether Castro has been vaccinated.

Police officers and department employees can voluntarily register their vaccination status with the department.

‘One of the good guys’

Both colleagues and family friends are remarking on Castro’s long-held desire to be a police officer.

Castro was 19 years old when he first joined Overland Park Police as a motorist assist officer, according to the local Fraternal Order of Police.

Two years later, he applied and became a full officer.

“His aspirations and work ethic inspired and impressed those around him,” the FOP wrote on Facebook. “He has been an integral part of our brotherhood and we miss him dearly. Keep fighting brother. We’ll have the watch in the meantime.”

Karen Green, who started the GoFundMe fundraiser online and called Castro “like a third son,” said becoming a police officer had been his dream since childhood.

“As far back as I can remember, Freddie wanted to be in Law Enforcement,” Green wrote in GoFundMe’s summary. “Like so many in law enforcement, this was his calling. Freddie’s hard work and determination paid off when his dream came true two years ago.

“Freddie is a loving son, a brother, grandson, cousin, devoted uncle, nephew and friend. He is one of the Good Guys in the book of life,” Green wrote.