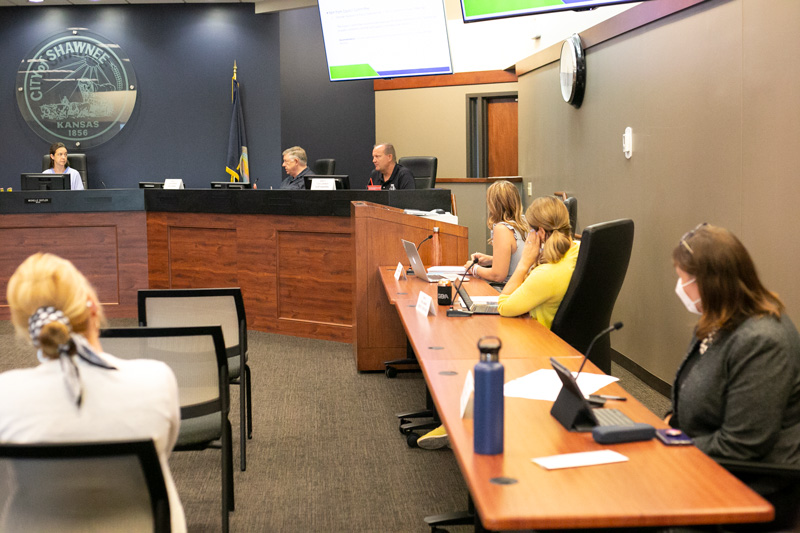 The Shawnee City Council this week unanimously approved several changes to the city's policy governing the conduct of public meetings. One such change gives the meeting chair, typically the mayor, the right to restrict or limit public comments after 12 people sign up to speak on a specific item. Photo credit Leah Wankum.

The Shawnee City Council has given itself the ability to limit public comments in city meetings, just one of several changes to a city policy governing the conduct of public meetings.

The council unanimously approved the changes related to public comments and a few other policies Monday.

The vote came after more than an hour of deliberations, and the discussion was one of several the city council has had over the past few months about the new conduct policy.

Why is this occurring now?

During Monday’s discussion, no councilmember specifically named the Shawnee Storm, but earlier this year, dozens of members and volunteers with the Special Olympics squad essentially filibustered the public comment portions of multiple city meetings as they pleaded with city officials to provide the team with more administrative support.

Based on multiple discussions among councilmembers over the past few months, the city council’s ultimate goals appear to center around ensuring that both members of the public have enough time to speak, but that the mayor or whoever is leading the meeting can also limit public comments if they become repetitive.

At the same time, some councilmembers said they wanted to make sure the rules were consistent and efficient for governing meetings, while still avoiding any arbitrary restrictions on individuals’ or groups’ rights to air their thoughts.

“It puts the chair in a tough position, but we’ve done it effectively,” said Mayor Michelle Distler. “In the past, we’ve said, ‘OK, we’ve heard you’re concerned about traffic, property values, crime. Is there any new additional information? And if not, we are well aware of those issues.'”

To that end, anyone wishing to speak during a city meeting is now “strongly encouraged” to sign up in advance — at least by 12 p.m. the day of the meeting — and anyone planning to give a presentation is also asked to provide their materials to city staff in advance.

A recording of the meeting is below and on the city website. Discussion begins at 9:53.