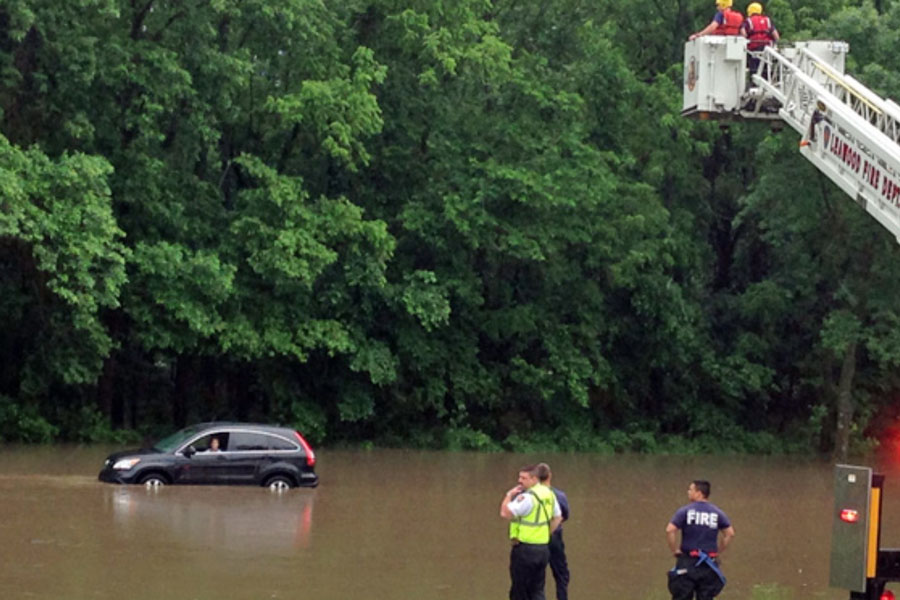 The Mid-America Regional Council says climate change will increasingly put the Kansas City region at higher risk for things like extreme heat and drought. Seasonal flooding, like the kind experienced each summer along Tomahawk Creek (above), could also get more frequent and severe. The Kansas City Regional Climate Action Plan bills itself as a framework for local governments to take steps to help reduce greenhouse gas emissions to zero by 2050. File photo.

An ambitious climate action plan intended to get the Kansas City area to zero greenhouse gas emissions by 2050 is making its way through local governments, including the Johnson County Commission.

Commissioners are due to look at the Kansas City Regional Climate Action Plan at its meeting Thursday, Sept. 2.

The plan — the product of two years of work spearheaded by the Mid-America Regional Council and Climate Action KC — has been making the rounds of different metro governments and civic groups with an increasing sense of urgency among its purveyors.

That urgency is being fed by increasingly dire warnings about the intensification of global climate change.

The most recent report from the United Nations’ Intergovernmental Panel on Climate Change, for instance, concluded human activity is already warming the earth’s atmosphere and oceans, leading to potentially irreversible changes in climate.

Organizers of the Climate Action Plan still have some work to do in rolling out its specifics to 119 municipalities in the Kansas City region, says Karen Clawson, a planner and program manager with MARC.

“It’s taking quite a bit of effort but we feel a sense of urgency around doing this,” she said.

Seeking a resolution of support

The plan is a first for MARC, which approved it in March. It’s not a to-do list, though, but instead promotes a “flexible framework” for how cities and counties and work to mitigate the impacts of climate change in their areas.

The plan sets out strategies local governments can use to reduce emissions, conserve waste and support sustainable construction. It leaves the particulars up to the governments.

A resolution of support announces governmental leaders’ intention to look into their own policies for greener solutions, Clawson said.

“By showing their support they’re saying they will be looking through the different strategies included in the plan and begin implementing them in their own way,” Clawson said.

Some examples of policies the plan promotes include:

Johnson County already has a good start, said Commissioner Janee Hanzlick, who is also on the MARC board that helped create the Climate Action Plan.

Hanzlick noted that the county was one of 20 jurisdictions in the country this year chosen to participate in the U.S. Green Building Council’s LEED certification grant program for communities. LEED stands for Leadership in Energy and Environmental Design.

That program gives technical support for efforts to improve sustainability.

Commissioner Jeff Meyers said he thought the plan was well-received at a commission work session last month and that it will encourage steps in the right direction.

For her part, Clawson said the reaction in Johnson County has so far been “exceedingly positive.”

The presentations have gone well at the county’s planning commission, sustainability committee, food policy council and transportation council and park and recreation district, she said.

The park district has already adopted its resolution of support.

The need for greener policies took on more importance this year with the most recent report by the Intergovernmental Panel on Climate Change, which the United Nations called a “code red for humanity.”

The MARC presentation to commissioners noted that climate change will put the Kansas City region at high risk for flooding, extreme heat and drought.

Clawson acknowledged that rolling out the plan to every city and county will be a slow process as MARC presenters work through committees and toward full city councils.

Kansas City, Mo., is working on its own climate protection plan, as well, she said.

“No target is going to feel fast enough to a lot of people,” Clawson said. But the IPCC’s report has reinforced a general feeling of urgency that was already there, she said.

“I think now we’re just trying to maintain hope by continuing to go out, reaching out to these communities and letting them know we have built this path forward, this very collaborative framework we can all get behind that’s a blueprint for action,” she said. “We hope this kind of action plan is providing hope.”