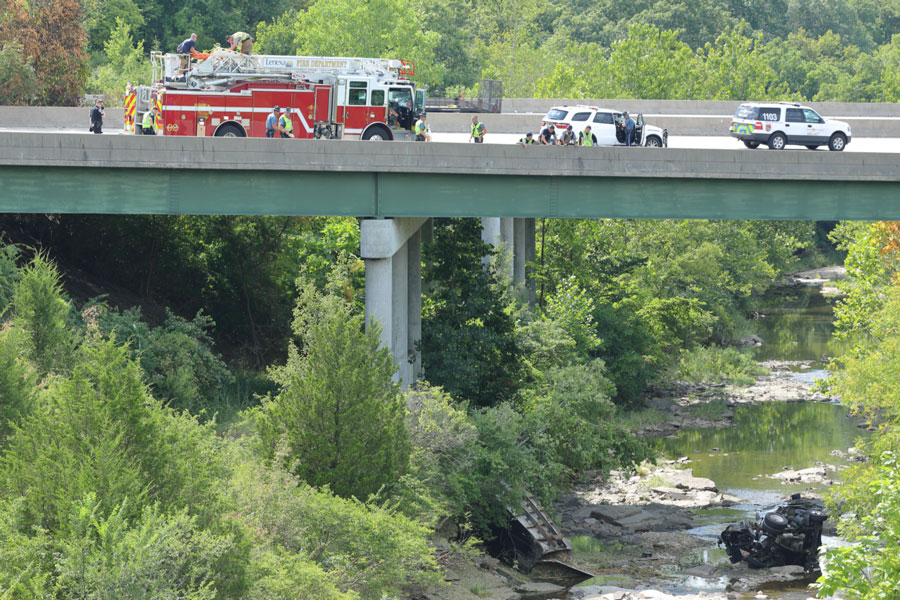 One man was killed and another seriously injured after their truck fell some 60 feet down a highway embankment on I-435 in Shawnee Thursday. Investigators say a blown tire is suspected of causing the crash. Above, first responders look down from a highway overpass at the crashed truck (below, bottom right) after an ambulance left with the injured man. Photo credit Mike Frizzell.

One man was killed and another seriously injured after a landscaping truck blew a tire and crashed down a highway embankment Thursday afternoon in Shawnee.

Kansas Highway Patrol Troopers say the truck, a 2007 Mitsubishi, was traveling northbound on Interstate 435 just south of Midland Drive when its left rear tire blew out.

According to the Highway Patrol’s crash log, the driver could not correct for the blown tire, and the truck hit the right guardrail.

“Vehicle one then went over a bridge and rolled twice, landing in a creek,” the crash log says.

Troopers have identified Gomez Humberto-Perez, 43, of Kansas City, Kan., as the man killed in the crash. The crash log says Humberto-Perez was a passenger in the truck.

Firefighters were able to help the driver from the truck. He was then able to walk to a waiting ambulance.

The driver has been identified as a 24-year-old Overland Park man.

Troopers say he was transported by ambulance to the Overland Park Regional Medical Center with a “suspected serious injury.”

The truck was towing a wood chipper trailer, which disconnected from the truck and continued across the bridge, skidding along the guardrail. 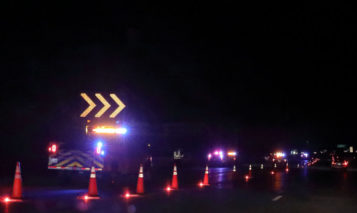