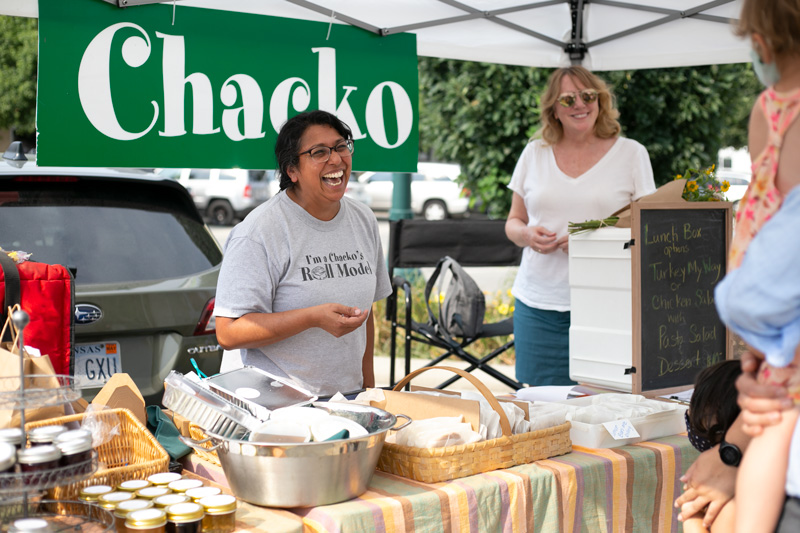 Eight years after closing her beloved Chacko's Bakery and Eatery, local chef Rachel Finn is starting Chacko's as a studio kitchen in her Mission home, where she will teach cooking classes. Photo credit Leah Wankum.

Mission native Rachel Finn loves feeding her community too much to stay away for long.

So, eight years after closing Chacko’s Bakery and Eatery, a once-popular spot on Johnson Drive still beloved in memory by its loyal customers, Finn is debuting Chacko’s Studio Kitchen, where she will host cooking classes in her home basement.

Chacko’s customers still reminisce about the good times, the sweet and savory treats Finn baked up and their favorite courses Finn served at private dinners that came to be lovingly called “the Supper Club.”

When Finn appeared earlier this month at the Mission Market hosting a pop-up Chacko’s stall, it naturally created a stir.

“I loved it, I loved doing all the production, I loved doing the food, I loved meeting the people, but I always said I wanted to close it when we were on a high,” she said, referring to the old bakery.

“It feels amazing that we built this community, and my son put it really lovely when I was at the market, he couldn’t be there, but he goes, ‘Mom, I am so proud of you for feeding the people that you have brought into our world.’”

After closing shop in April 2013, Finn began serving as medical chef educator at Children’s Mercy Hospital, where she helps children and their families with nutritional needs and home cooking advice for their special diets.

While she enjoys her work, Finn says she has missed her community so much over the years. She’d rustle up cinnamon rolls and other baked goods for her neighbors and long-time fans.

Finn would even host dinner parties, reminiscent of the Supper Club days, but then the pandemic brought those to an end.

Ultimately, after missing those connections, she found that cooking for people is one of the biggest personal drives she has.

“I feel loved, and they give me so much energy,” Finn said. “When you have a life change like that, and you close a business that you truly love, there are some grieving processes. And so I needed to figure out how I could fill that void, and my void is I need to feed people.”

After the COVID-19 pandemic, when many home dinner parties came to a halt, Finn started to get more creative.

“This past year, with the pandemic, with missing people and missing society and my community, I just kind of brainstormed and thought, ‘What can I do?’” Finn said. “And so, I’m reopening Chacko’s as a Chacko’s Studio Kitchen, back in my basement.”

She has already started teaching some cooking classes twice a month since opening the studio kitchen this summer.

It’s the same kitchen where she tests all of her recipes for her work at Children’s Mercy. She hopes the studio kitchen will be fully operational by October.

“It’s been really fun to have people in my space and teaching them how to cook,” Finn said.

As to next steps, she hopes to offer even more cooking classes and eventually open a commercial kitchen and become licensed to sell jams and chutneys to local restaurants.

The warm evening in early August at the Mission Market grew brighter as customers swapped fond memories while waiting in line for Chacko’s.

David and Robin Hagedorn of Mission, long-time customers of Chacko’s before it closed, shared their admiration for her work at Children’s Mercy, and of course, how much they miss her cooking and her accommodations for dietary restrictions.

“She’s sharing her wonderful nutritional and cooking talents with kids who don’t know how to eat because they have health concerns, and so she’s instructing them on how to eat healthy,” said Robin Hagedorn. “To me, that’s so important. And then she’s sharing her love of food, which she’s always had. She dreams of food. And so I think it’s neat that she shares it with everybody, especially those who really need it.”

Chacko’s Bakery and Eatery started out as a catering business in 1998, run out of the very same basement where Rachel Finn’s studio kitchen now is.

“It was so much fun,” said Finn of the dinners. “It became new friendships and cultivating that. You can never have a big enough table, is my theory in life.”

Finn, a lifelong Mission native, still lives in the same neighborhood where she grew up.

She moved with her family there in 1974, immigrating from southern India so her father, Mani M. Mani, could oversee the burn unit at the University of Kansas Medical Center.

Her late mother, Rebekah Mani, was a dietician who taught Rachel how to cook. She must have taught her daughter well, because Finn’s customers still press her to teach them how to make chutney.

“She’s done very well,” her father said. “It is much more than the standard recipes and menus; it’s her own creation.”

And Finn will keep the business name for the studio kitchen because Chacko’s is named after the Finns’ son.

It’s a Southern Indian name that’s the equivalent of the name Jacob.