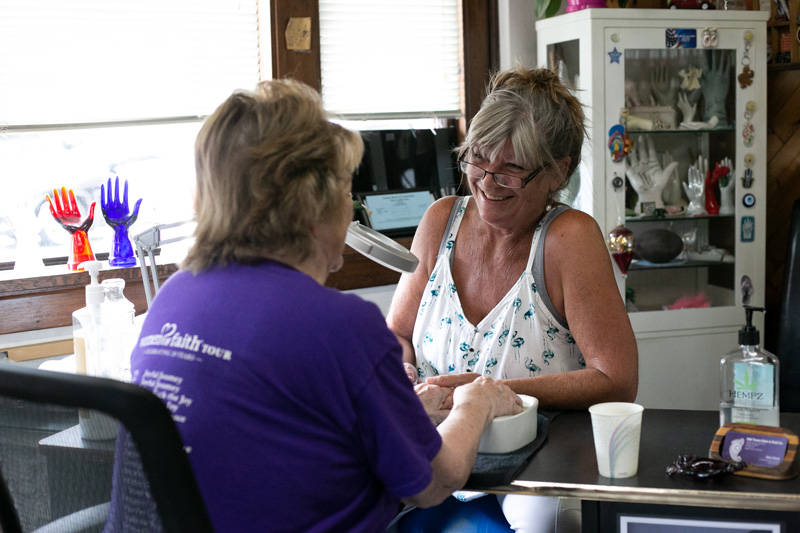 After more than three decades in business, Old Town Hair & Nail Company will permanently close this Friday. Long-time owner Mary Penny, who opened the salon in 1990 with her late husband, Howard Penny, is retiring and moving to Truman Lake.

The salon’s last day open will be this Friday, Aug. 20, the day before Penny’s 62nd birthday. She plans to vacate the shop on Santa Fe Trail Drive by Sept. 1.

“You meet a lot of people, and a lot of people are blessings in your life, and I feel like I have been to them too,” Penny said. “And it is bittersweet because it’s like a bunch of extended family that you’ve come to know over the years, and their families.

“It’s very hard but at the same time, I’m going to be glad to be able to start taking care of myself, slowing down and experiencing life a little bit differently.”

In addition to the salon’s closure, Penny and her family, the Ryckerts, sold the building in April to Independence Property Management, a family-owned company based in Richmond, Mo.

Bill Schultz, a broker in Prairie Village who helped the company purchase the building, said they’re in the market to find a new tenant for the space.

“They [Independence] bought it as an investment, and they hope to have it long term,” Schultz said. “They’re very pleased with everything and hope that everyone there has great success.”

Mary Penny, whose maiden name is Ryckert, and her husband, Howard Penny, first opened the salon at 13446 Santa Fe Trail Drive in 1990.

A licensed barber for 50 years before retiring, Howard did hair while his wife did nails and, later on, massage therapy.

“We started that salon, him and I,” Penny said. “We built it into what it was, and we’ve gone through a lot of years of when we were brand new in the ‘90s and it was a little rock ’n’ roll barbershop.

“Things change, and your employee staff changes, and times change and all that. It was a lot of things come and go in that little block in Old Town, and I think right now, things are starting to look up again. The stores are starting to get rented again, and there’s starting to be a little more action.”

She hopes to see a retail shop move into the corner spot, which was home to a bank in the 1920s. The property was owned for years by the Ryckert family, including her father, Joe Ryckert.

“It was a good run out there, and I loved what I did for a living,” Penny said. “It was wonderful helping people, helping them with their beauty care and I think sometimes manicurists and hair cutters, you’re definitely a therapist as well for a lot of people. But it’s good, too, for us because it’s just good to talk to people, just to talk to one another.”

“I’m very, very happy for her, but I’m also very sad, I’m going to miss her,” Rickey said. “She’s the absolute best. But we’ll be going down to her lake house to have cocktails and party. It’s not goodbye forever. My sister and I intend to stay in touch with her. Plan on it.”

There has been talk for years of revamping Old Town. Penny imagines the historic block will look completely different a decade from now.

“I hope they do, because there’s a lot of history there in Old Town,” Penny said. “I love the train going by. You go down Santa Fe, and life kind of slows down a little bit. It’s kind of like working in Mayberry to a certain point because it’s all old buildings and it’s neighborly, people are walking down the sidewalks. It’s different.”

In fact, Penny grew up in Lenexa and remembers when 87th Street was a gravel road with a house every half mile and cornfields in between.

“Lenexa has grown so much; I’m a product of the late ‘50s and now it’s like a whole different world out there,” she said. “There’s a lot in life, and I want to enjoy what I can before it gets away, ‘cause it goes awful darn quick. I can’t believe 62 years has gone like it has.”

Penny plans to retire to a small house near Truman Lake, near Clinton, Mo., southeast of Kansas City.

Penny says she wants to do lots of fishing, gardening, growing flowers, watching sunrises and sunsets, cooking and listening to music.

Oh, and “Chance” the Native American cigar store statue outside of her salon is going with her, she says.