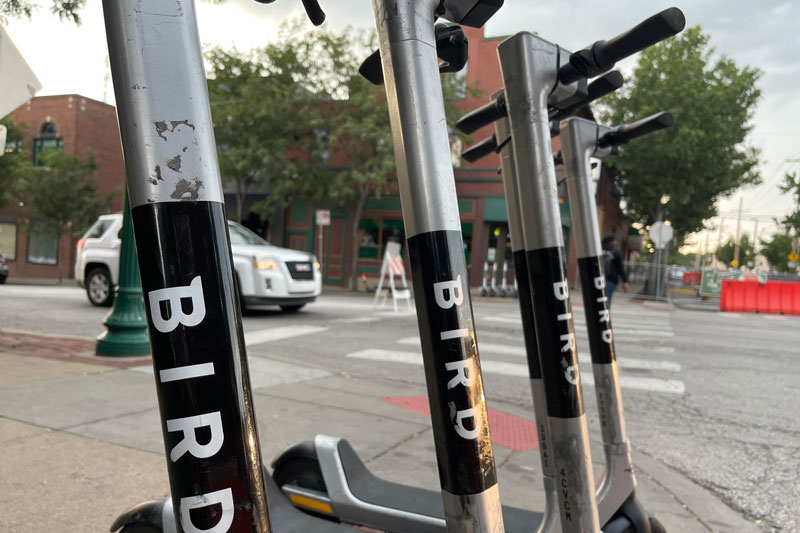 The city of Prairie Village could be receiving at least 50 Bird scooters if the city council formally approves a pilot program with California-based Bird. Though the city council committee of the whole on Monday gave initial approval to the pilot, some councilmembers expressed concern about safety and scooters cluttering up city sidewalks. Above, Bird scooters parked in neighboring Kansas City, Mo.

The city of Prairie Village is on the brink of making way for a fleet of dozens of rentable, motorized electric scooters, though lingering concerns about the vehicles has prompted the city to consider a pilot program that can be ended relatively quickly.

The city council previously expressed some concerns over adding scooters to city streets, but the council committee of the whole on Monday approved entering a memorandum of understanding for a pilot program with Bird, one of the biggest players in the growing e-scooter market.

Mayor Eric Mikkelson said he’s supportive of the pilot program because it will allow the city to look into the viability of alternative modes of transportation.

He noted that neighboring Overland Park recently made a list of top 10 worst cities to live in without a car, an issue he said he’s worried about in his own city.

“That’s a challenge we face as well, our cities were built for cars,” Mikkelson said. “To the extent we can facilitate alternative transportation, I think there are some benefits to that.”

As proposed, the pilot program would be a one-year trial period that gives both the city and Bird the option to terminate the agreement with a 30-day notice.

Mike Butler with Bird told the committee that, if approved, Prairie Village would have a dedicated account manager to help guide the city through the pilot.

That manager would be able to work with city staff on which streets or areas are off-limits if the presence of scooters become an issue.

She had previously expressed concerns about adding scooters to Prairie Village, citing issues that have cropped up in neighboring Kansas City, Mo., where Bird scooters are in use, including concerns for untrained riders’ safety and the obstacle that scooters can pose when deposited on city sidewalks.

On Monday, Selders said she had polled community members on social media and an overwhelming majority were strongly against adding scooters to Prairie Village. Some of them, she said, had also raised concerns that teenagers could get on the scooters.

Others like Councilmember Tucker Poling were in favor of the pilot program, again emphasizing the importance of the 30-day termination option.

“If we get into this and decide it’s not working out, we’ve got the option,” Poling said. “I think we ought to be open-minded. This is a transportation option that’s being increasingly used. I’ve seen it in a few cities I’ve been to this summer.”

The council committee of the whole approved the agenda item in a 7-4 vote Monday, with Councilmembers Chad Herring, Jori Nelson, Selders and Gallagher in opposition.

Butler said the deployment of a fleet of Birds — at least 50 scooters at the launch — depends on how quickly the city approves the pilot program.

The city council will formally consider and could ultimately approve the pilot at its Sept. 7 city council meeting.