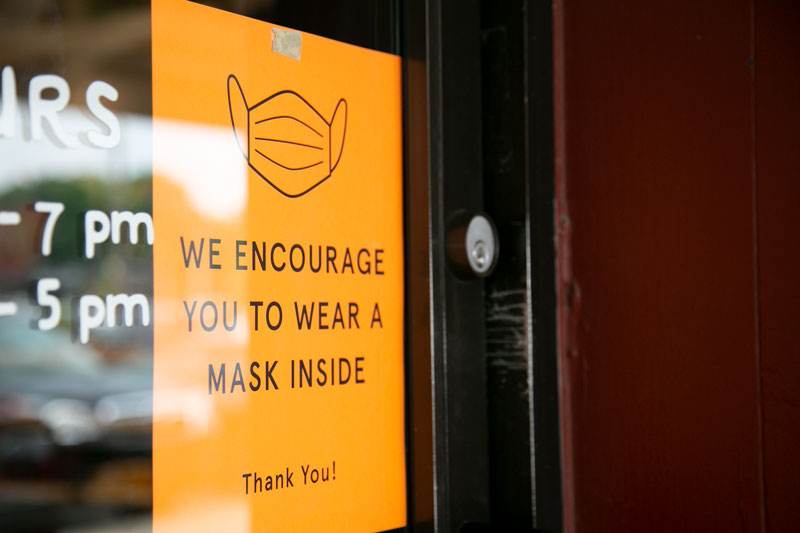 Individuals will now be required to wear a mask inside most indoor public spaces in Prairie Village, following the city council's adoption of a mask mandate Monday night. The mandate does offer an exemption for businesses that want to require customers to provide some proof of vaccination upon entering. Above, a Prairie Village business at Corinth Square asks customers to wear a mask inside.

The Prairie Village City Council on Monday approved a citywide mask order requiring masks be worn in most public indoor spaces, unless businesses require customers to provide proof of vaccination.

It’s the first Johnson County city to issue its own mask mandate as cases driven by the contagious Delta variant continue to lead to a surge of new cases throughout the Kansas City metro.

Monday’s vote came two weeks after Councilmember Jori Nelson unexpectedly proposed a mask mandate at the Aug. 2 meeting. Mayor Eric Mikkelson said as far as he knows, there’s no sign that other Johnson County cities — nor the county itself — is considering their own such mandates.

The Merriam city council discussed the issue last week but ultimately decided against a mask order.

After a nearly two hour discussion, the city council vote 10-1 to approve the order, with Councilmember Sheila Myers in opposition. Councilmember Dan Runion was absent.

The details of the mandate are as follows:

The mandate will be in effect until Oct. 1, and the city council plans to revisit the issue at its Sept. 20 meeting.

‘This should not be a polarizing, divisive issue’

Many councilmembers shared concerns from regional chief medical officers about the strain rising cases are putting on the local health care system.

Myers was the sole dissenting vote against the mandate itself. She voiced concerns that the mask mandate could drive customers and shoppers to other neighboring cities without mask orders, impacting Prairie Village businesses.

Others like Councilmember Tucker Poling were in strong support for the mask mandate.

Poling said he weighs the benefits versus the burden for each decision the city council needs to make. The benefit of the mask mandate is potentially saving human lives, Poling said, while “wearing a mask is a minimal burden.”

While he voted for the order, Councilmember Terrence Gallagher said he’d like to track how the mandate is impacting the city’s infection rate over the next six weeks.

Gallagher also pointed out potential problems with the mandate such as the ability to enforce it, for instance, when someone isn’t properly wearing a mask.

Councilmember Ron Nelson said nobody wants to continue to wear masks, socially distance or live in fear. Still, Nelson said he thinks it’s the city council’s responsibility to protect the public the best they can.

A few Prairie Village residents, such as Michelle Vianello, spoke at Monday’s meeting either in favor or against the pending mask mandate. Vianello asked the city council not to adopt a mandate, and instead to focus on encouraging the public to get vaccinated.

“I have no doubt that a mask mandate will have a negative effect on Prairie Village businesses struggling to get back on their feet after such a difficult year,” Vianello said. “Please don’t give their customers a reason to go to Overland Park or Leawood for their entertainment.”

Others like Jameelah Lang, a Prairie Village resident and community activist who also sits on the city’s diversity task force, urged the city council to adopt the mask mandate.

Lang said wearing a mask is “an act of community care” and that “we must re-learn to care for one another.”

The pandemic, Lang said, is a reminder of how interconnected humans are, and that “democracy necessitates a collective responsibility.” Lang said the idea that wearing a mask infringes on one’s freedom of speech is a misunderstanding of the nation’s founding principles.

“Freedom does not mean you’re free from the ways your fate is intertwined with your fellow community members,” Lang said. “Nothing can free you from that fact of human existence.”