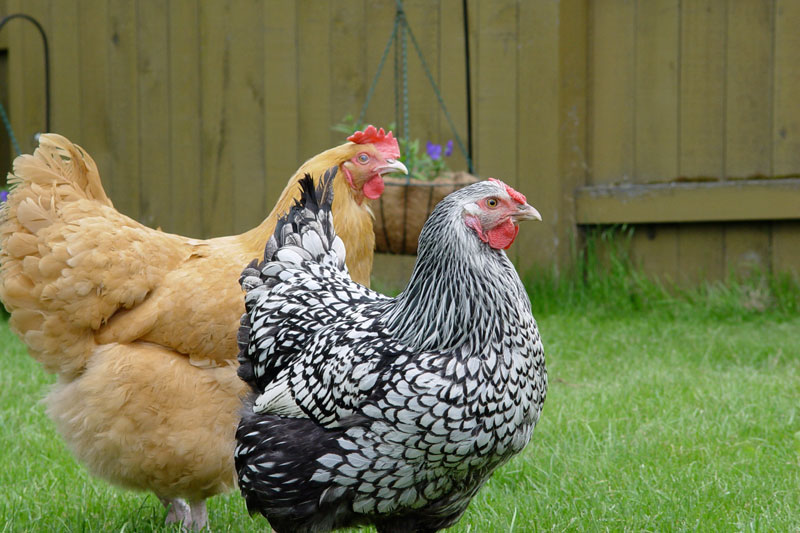 An Overland Park city council committee approved a two-year pilot program to allow property owners on lots as small as a quarter acre to own and keep up to three hens. In general, there has been more demand for backyard chickens in the north of the city, where lots are smaller. File photo.

Overland Park residents who hope to keep backyard chickens may finally have cause to rejoice.

After coming to a deadlock last November, city councilmembers have come up with a compromise they hope will make it easier for people on smaller lots to keep chickens on their property.

A proposed ordinance change is working its way through city government that would allow people on lots as small as a quarter acre to have up to three hens, provided they meet the rules for enclosures and setbacks and pass inspections.

The change would not require prospective chicken owners to make a presentation at the city planning commission and the full city council. That council presentation and vote process has typically been the downfall of previous chicken requests for owners of small lots.

Instead, chickens would be allowed by right under the city’s animal control ordinance, with a few basic stipulations.

Councilmembers on the Community Development Committee recently approved the plan as a two-year pilot program.

In doing so, they noted that it could solve an inequity between the northern part of the city, where interest in chickens is high but lots are smaller, and the southern part,  where large lots allow chickens but interest is generally lower.

The pilot will help suss out any issues that could arise and give officials a better idea of how much interest there is in backyard chickens.

The rules on chickens currently fall under the Planning Commission process.

Anyone with more than three acres is allowed chickens by right. But people with smaller properties must apply to the planning department for a special use permit and present their case at a commission meeting. If approved there, the petition goes on to the full city council.

Over the years the full council has often turned down those requests. But lately, some on the council have wondered if another process could be used that is less frustrating to residents and less time-consuming of city staff.

The new proposal gives administration of backyard chickens to the animal control department.

Chicken owners would be required to get a special animal permit, submit a site plan of chicken structures and have an inspection. Animal control checks on the birds’ welfare and the planning department verifies the lot sizes.

No roosters would be allowed. The number of hens allowed would be based on lot size as follows:

Tenants who rent their property could keep chickens with written permission of the property owner.

There are also a few other requirements for roofed and well ventilated coops subject to city inspection. The coop and attached pen would have to be at least ten square feet per bird.

No chicken structure could exceed 200 square feet on less than a three-acre property.

Chicken owners also would have to control odor, rodents and pests. Live slaughter would be banned.

What happens next: The ordinance still has a ways to go before it becomes final.

The council’s Public Safety Committee will review it, and the Planning Commission will consider it as well before it goes to the full council.

In the meantime there is a one-year pause on new chicken requests.