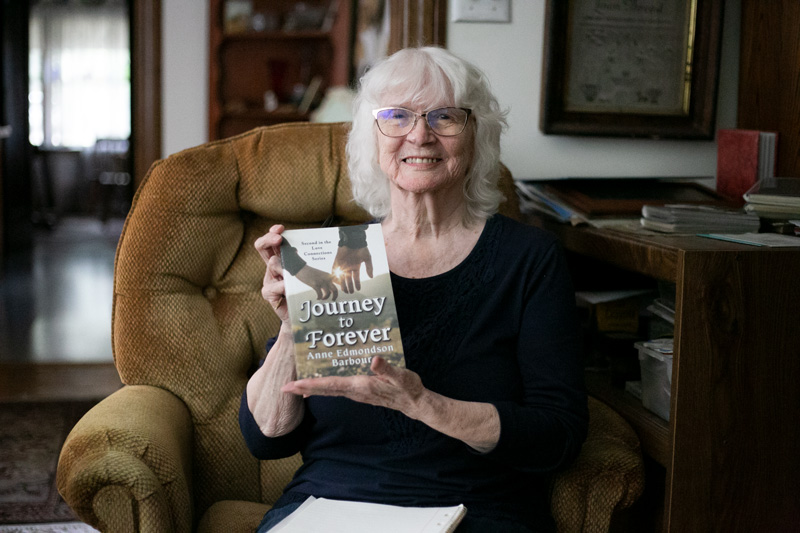 At age 85, Overland Park resident Anne Edmondson Barbour has finally fulfilled her lifelong dream of becoming a a published author. Her fictional romance series Love Connections is available on Amazon.com.

The words pouring onto the blank pages still come as kind of a surprise for Anne Edmonson Barbour.

At 85, the Overland Park resident has finally fulfilled her lifelong dream of getting published. And just a year after launching a contemporary romantic fiction series, Barbour is already eight chapters deep into her fourth book.

Barbour finished “It’s About Time,” the first novel in her Love Connections series, last summer. It was distributed through Mission Point Press, a publisher based in Michigan.

She released her second book, “Journey to Forever,” a few months ago and just finished the third book, “At Long Last,” which is set to debut Nov. 9.

“People ask me how long it took to write, and I say, ‘Well, you could say 30 years or eight weeks,’” she said, laughing. “Before it was published, the lady at the publishers asked me, ‘Is this the first of a series?’ And I said, ‘It’s the first of anything.’”

Edmondson Barbour has lived in her house in Overland Park for nearly 50 years.

She raised five children there with her late husband, Philip Barbour, and enjoys 10 grandchildren and six great-grandchildren, with another one expected in November.

Her Love Connections series is about love and romance, but she also weaves historical elements into it, particularly focusing on events in Nebraska.

The settings for the series go back and forth between points of interest along the Oregon Trail such as Chimney Rock and Overland Park, where one of her characters lives.

“I never thought about being a storyteller, but all these stories are in here,” she said pointing at her head, “and it’s my imagination, and the people are my family, you know?

“You have to keep track of them; it’s funny. So much you have to remember beause you could get so lost,” she said.

She and her husband were always storytellers, but still, writing was mostly Philip’s thing.

Anne recalled typing up his stories on the computer. A retired lieutenant watch commander from the Overland Park Police Department, he died before sending any of his work to be published.

Edmondson Barbour said she enjoyed reading romance novels, so she started crafting her own.

Back in the 1990s, she took a writers’ course by mail. Eventually, her half-finished books started gathering dust, until she became inspired one day to return to her work.

“One day at church, I don’t remember now what brought this up, but something was said about writing or finishing up something you started — this was before COVID — I told the lady sitting in front of me, ‘I have at least three books at home, and I have three or four chapters in,’ and she said, ‘Well, you should pick one up and finish it,’” Edmondson Barbour said. “So I did.”

It took her eight weeks to finish the first book. Only then did she decide to make it a series because she still has ideas for other characters in her fictional universe.

“I want [readers] to feel happy about the characters and what has happened with the characters,” Edmondson Barbour said. “I want them to have a hard time putting it down. A lot of people have told me that. One lady sent me an email once, she said, ‘I didn’t get a thing done today and it’s all your fault.’”

Some ask if her inspiration comes from her marriage of 58 years. While some elements of her series come from the Barbours’ travels to Nebraska, she mostly imagines her stories.

Some of her fans have also told her how unique it is for someone her age to become an author.

“It’s pretty special,” she said. “It’s hard to explain. Even though I always wanted to be a writer, and I didn’t start it, and if that lady at church hadn’t said something, I probably still wouldn’t have picked up the book and finished it. But when I did, and everybody liked it so much, I thought, ‘Well I need to keep going.’”

Her series can be purchased on Amazon or by contacting the publisher, Mission Point Press.