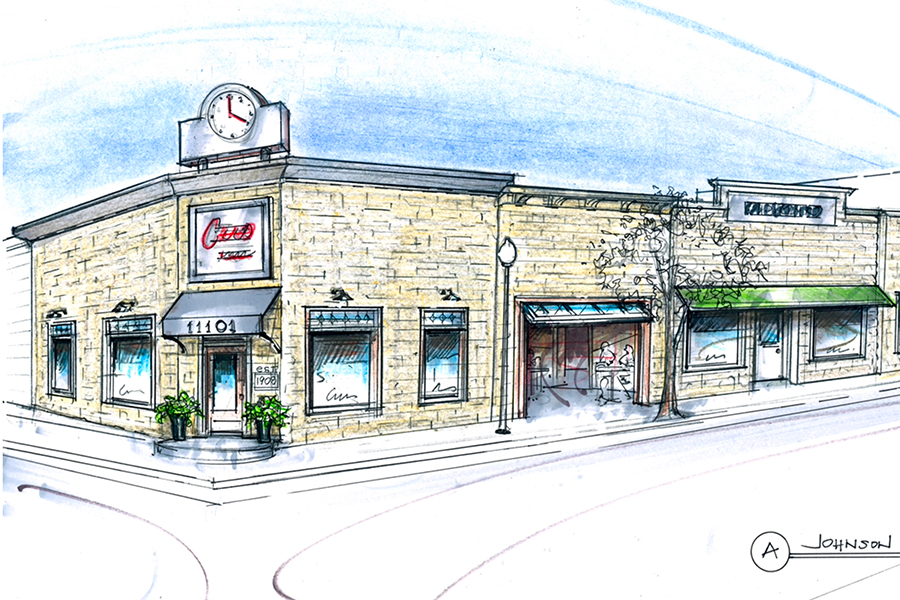 The Shawnee City Council on Monday unanimously approved a $300,000 city grant to go towards the revitalization of the Shawnee Bank Building downtown, a prominent property that has had trouble retaining tenants in recent years. Above, an artist's rendering of the building, once its more modern exterior wrapping is ripped away to reveal the original stone facade. Image via Shawnee City Council documents.

The Shawnee City Council on Monday unanimously approved a $300,000 grant to spur redevelopment of the Shawnee State Bank Building, a prominent property downtown at Johnson Drive and Nieman Road that has seen frequent tenant turnover in recent years.

Why it matters: City leaders say the grant will help revitalize the 100-plus-year-old building that’s directly across from Shawnee City Hall and at the heart of the downtown district the city has been working to reinvigorate for several years.

However, the building has struggled to keep tenants in place.

Sancho Streetside announced last month it was leaving the space and relocating to the former Garrett’s location at 65th and Nieman.

Previously, Sweet T’s Bake Shop had occupied the building. And before that it was Nieman Bay Coffee House and Dodge City Beef.

Throughout much of the 1990s and early 2000s, the property was home to a Commerce Bank branch.

Project details: Jenkins noted that the city had approached building owner Dan Pflumm about the idea of the grant and renovation, and not the other way around.

The $300,000 grant through the Shawnee Entrepreneurial and Economic Development (SEED) Program will go toward a planned $1 million-plus project that will include:

City officials said Pflumm has already filed a demolition permit with the city to get started on the property.

The grant has a stipulation that work on the project must be completed within a year of the execution of the agreement.

Mayor Michelle Distler was thrilled with the plans for the site, calling them “perfection for Shawnee.”

“I consider that corner building one of our landmarks, like the Caenen Castle,” Distler said. “So I’m really excited that we’re bringing it back to its original glory plus adding even more to it.”

Use of public funds for private development costs: Shawnee has used its SEED Program to spur the revitalization of its downtown area on a few occasions in recent years, including the Aztec Theater, just a few doors down from the Shawnee Bank Building, and the McLain’s Market, which opened in the longtime OK Garage space nearby last summer.

The program has at times attracted scrutiny from members of the governing body who aren’t comfortable with the allocation of public funds to private development.

But the prominence of the Shawnee Bank Building property and the desire to see downtown reinvigorated drew unanimous support for this proposal Monday night.

“I struggle sometimes with SEED agreements, but I’m completely behind this,” said councilmember Tammy Thomas.