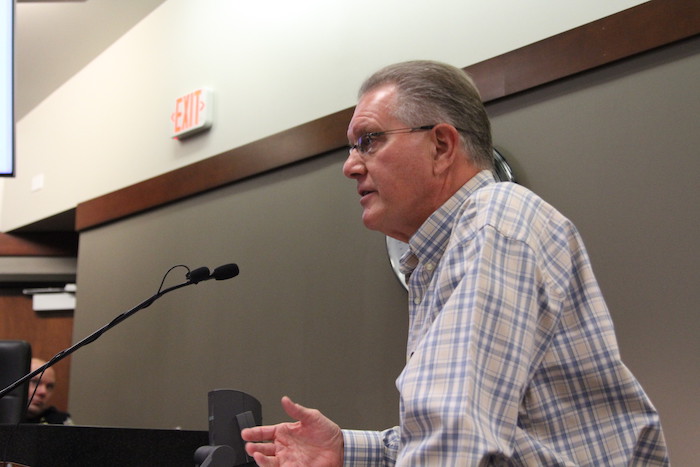 Kansas state Sen. Mike Thompson, a Republican from Shawnee, says parents and students should be free to choose whether they get vaccinated against COVID-19. In a recent Facebook post, Thompson recounted a story of a local student allegedly getting pressed about their vaccination status at a local school vaccine site. Two public school districts in Thompson's senate district say they do not deny entry or access based on vaccination status and have received no complaints about their vaccination clinics. File photo (taken pre-pandemic.)

Editor’s Note: Our top priority in covering COVID-19 in Johnson County is to ensure residents have accurate information about how the pandemic is affecting daily life here. The pandemic has sparked many rumors and the spread of misinformation, and we view it as part of our responsibility to vet claims made about the virus, vaccines and public health interventions that may gain traction among portions of the community.

Kansas Sen. Mike Thompson said he did not confirm the veracity of an anecdote about a staffer at a school vaccine site allegedly pressing a local student about the student’s vaccination status before posting the story on Facebook over the weekend.

The post received wide circulation, getting shared more than 500 times.

In the post, Thompson offers a vague recounting of the story in which an unnamed student was allegedly accused of lying after hesitantly answering “yes” to a query about whether they were inoculated against COVID-19.

Thompson suggested that the staff member at the school who questioned the student had done something “illegal, unethical and wrong.”

Contacted by the Shawnee Mission Post to get more details about the incident, Thompson, a Republican from Shawnee, said he had been told about the alleged incident secondhand from a source he trusts.

Thompson said he thinks the incident took place at a school in his senate district, which covers much of Shawnee and parts of Merriam and Overland Park. But when asked, he acknowledged he did not have much detail on the alleged encounter when he wrote his post, and said he was too busy to try and vet it.

Thompson also said he had not reached out to any local school districts to try to verify the story before posting it Saturday, Aug. 7.

Spokespeople for both the Shawnee Mission School District and USD 232 in De Soto, said Monday they had no knowledge of any such incident until being told about the Facebook post by a reporter, nor had they been contacted by an aggrieved student, parents or by Thompson.

According to Thompson’s post, which remained on Thompson’s Facebook page Tuesday, a high schooler was headed for a school activity “only to encounter a station in the school that was offering [the] COVID vaccine for free.”

The post goes on to suggest the student ultimately lied to the staffer in order to get out of the situation.

“In this case the student did not offer the truth as they were concerned over the harmful side effects of the jab. Fortunately this student did not succumb to the pressure and left…but how many kids would have the wherewithal to do that?

“This is what your children will be encountering over the next week or two as they return to school,” Thompson wrote.

Although the anecdote as told on Thompson’s Facebook page does not clearly say whether the student was denied access to an activity, Thompson’s post goes on at length about the illegality of denying access to a public place based on COVID vaccination status.

He also expresses his skepticism about guidance from the CDC and includes a link to Kansans for Health Freedom, a nonprofit that describes itself as “coming together … for the love of healthy living and the freedom to make our own health choices.”

School district spokespeople said emphatically that they do not deny access to activities or facilities based on vaccine status, nor do they force anyone to get the shot.

In fact, they say, state law requires parental permission before children who are old enough can get vaccinated, a fact Thompson concedes in his post.

“I know how we train our people, and that’s not how we train them,” David Smith, spokesperson for Shawnee Mission district, said of Thompson’s story.

Shawnee Mission and USD 232 both return students to in-person classes later this week, and like Blue Valley and Olathe schools, will require universal masking in all their facilities as COVID-19 cases surge again across the Kansas City region, driven by the contagious Delta variant.

But no local public school district is requiring students or staff be vaccinated against COVID-19. Instead, districts are strongly encouraging eligible students get vaccinated. Currently, only students 12 and older can get the shot.

Spokespeople from Shawnee Mission and USD 232 said the districts held vaccination events over the summer with shots available to anyone who showed up, not just students.

The events in the De Soto district were in partnership with other entities as a convenience for anyone during summer activities, Rooman Smith said. The district did not receive any complaints, she said.

Likewise, Smith said Shawnee Mission’s clinics were open to everyone, and there were no complaints.

Thompson reaffirms right to choose to get vaccinated

Thompson has been critical of COVID-19 limits put in place by schools over the past year.

In May, he attended a Shawnee Mission board of education meeting and gave public comments urging the board not to institute new mask requirements ahead of the 2021-22 school year. He claimed then that masks were ineffective at stopping spread of the disease and could, in fact, be harmful to wearers’ health.

In regards to the story about the student who was allegedly challenged about their vaccination status, Thompson said he was not specific about which high school the incident allegedly occurred at in the post because he didn’t have many details and hadn’t verified it.

Still, he told the Shawnee Mission Post Monday that he was convinced it really happened to a student in his senate district.

“I didn’t have the time to do any check. It was just anecdotal evidence that something was going on and it was somebody who I trusted and therefore I thought people need to be aware and know that these things either are happening or have the potential of happening,” he said.

“It was concerning enough that I thought, let’s post this,” Thompson said. “The whole thing of the post was to tell parents to talk to your kids. You know how kids can be pressured. I don’t want to see anything that circumvents a parent’s right to make those decisions and that is what concerned me.”

The post also emphasizes potential drawbacks of wearing masks and refers readers to medical, religious and other exemptions to be put in their students’ files.

“I realize some people may think this is silly and may even agree to get their kids vaccinated,” the post says. “That is your choice.”

Thompson said in an interview the point of the Facebook post was to reaffirm personal choice when it comes to the vaccine.

When asked, Thompson declined to say whether he himself has been vaccinated.