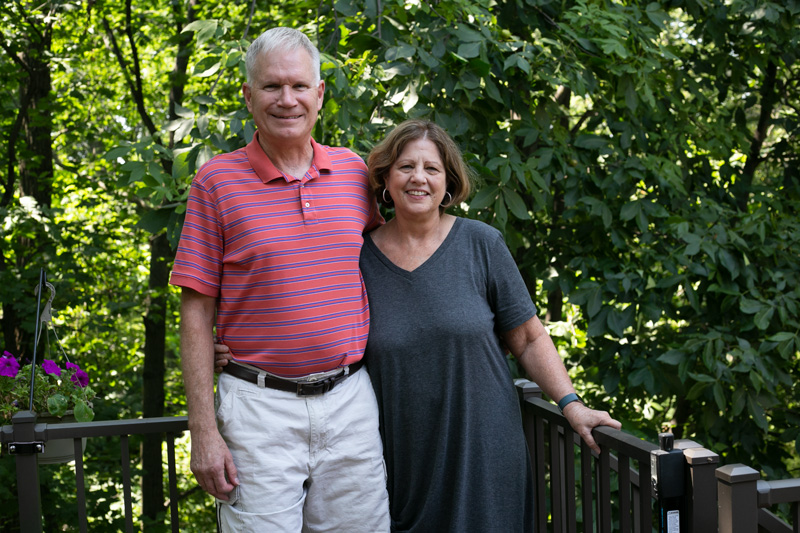 Brian (left) and Connie Basel are organizing the Shawnee Mission Northwest Class Reunion for 1970 and 1971. Both graduated with the Class of 1971.

This year is a big one for the Shawnee Mission Northwest Class of 1971. Alumni are celebrating 50 years since graduating as the second class from the newly minted school, which (sort of) opened in fall 1969 (more on that later).

Connie Basel (maiden name DeHart) and her high school sweetheart, Brian Basel, are organizing the 50th Class Reunion, which will take place in conjunction with the Shawnee Mission Northwest Class of 1970’s 51st reunion (that never happened because of the COVID-19 pandemic last year).

The joint reunion takes place Nov. 13 with a tour that morning of the high school and a gathering that evening at Abdallah Shriners in northern Overland Park.

The Basels both grew up in Shawnee and met in eighth grade science class at Hocker Grove Junior High (now Hocker Grove Middle). He did marching band; she was the yearbook editor. They went together to prom and the WPA (Women Pay All) dance. After graduation, they went to K-State, her for elementary education and him for mechanical engineering.

They have enjoyed 47 years of marriage and live in Overland Park and have three children: Laura, Ron and Emily, and six grandchildren.

I think there was a lot of enthusiasm and a lot of pride getting to start at a new high school.

Because you didn’t have to transfer if you didn’t want to. We could have stayed at North. I never even thought about it.

My sisters, they graduated from North. It’s a wonderful high school, full of tradition, the original high school. But I’d never thought about staying there. I liked to be at a brand new high school and doing something different than them too.

Some of my friends didn’t transfer by choice, but some of them couldn’t. The way the lines were drawn, they had to stay at North. One of my really good friends at the time — and we ended up rooming together in college — she would come, I think, to Northwest if she could have.

And it got a lot of positive publicity in the papers, The Kansas City Star as well as the local publications there. So I think people were like, oh I wish I could go there. They probably made it sound better than it was (laughs).

But the very first day of school, there was a big construction strike and Shawnee Mission Northwest could not open.

So we went to Trailridge Middle School on shifts. We went in the morning from like 6 to 11, for five or six hours. We left, and then the junior high kids came in and went for five hours. And we did that until after Christmas of our junior year.

So that’s how it started. And even when we got into the school — it’s a wonder, I don’t know what they would do now, I think now there’s enough empty buildings that somehow we would have used something — we were crowded.

There was no place to go, so they got pretty creative with this, because they probably could have said, oh let’s just wait a whole year, let’s just leave them at their high schools. But we had done a lot of work already, had a mascot and all that.

So when we went back and were able to start school, it wasn’t even finished then. We were stepping over stuff in the hallways, there was no gym. My P.E. class, I remember, was in a regular classroom and we did our little jumping jacks and stuff (laughs).

The swimming pool wasn’t even there yet, I don’t think. But there was a lot not done yet. The basic classrooms were done, I suppose the cafeteria was. The mall was all open. So I think there was so much enthusiasm, they wanted to start.

Coming from Shawnee Mission North, which is wonderful and it’s amazing how they’ve kept it up, but it was old. It was old 50 years ago. Just everything was fresh and new, and very different, even from the outside.

One thing that we all had that perspective as students was we had a lot more freedom at that school. We had a big common mall area that you could hang out and stuff instead of going perhaps to study hall or something like that. It was ahead of its time in some of those areas.

Just coming from Shawnee Mission North, everything was pretty somewhat rigid, pretty cut and dry, it’s a typical school. But we were given more freedom at Northwest with more free time to do different things.

It was a different format for the schools at that time, because we had a real progressive principal that they brought in from St. Louis, and they went to a more open concept where we would have independent study, so you could even go in, take tests on your own schedule and so forth.

Some people did great with that, some people not so good, but it was a totally different feeling, and it was pretty revolutionary at that time. Shawnee Mission Northwest was the first school to allow the females to wear long pants. That was just a big deal.

They took buses over to Glenwood Theatre to see movies together, tied it in with your social studies class. It was a different way of learning.

We had bowling in P.E., and there was a big snack bar in that commons area, and you could have wonderful homemade cinnamon rolls. We had vending machines. It was just different. That stuff didn’t exist, and I think a lot of that stuff started happening at the other high schools as a result of what we started at Northwest.

As we came up to the 50th, there was a lot of talk about are we going to have a 50th reunion or not.

Nobody was really stepping up to start the process, but we got together with a couple friends that we went to high school that are now married, and we had an informal reunion back in 2018 at their house, just to see if there was interest. And there was quite a few, maybe 50 people there or so. And we’d seen on Facebook, people talk about it.

And we had pretty good turnout at our first meeting for the planning committee. It’s just been amazing to find out that you went to school with people that had incredible careers and have different talents in different areas.

I hope we don’t get impacted by COVID, because that was discussed. At the time, it was looking pretty good. I think hopefully a lot of our classmates are probably vaccinated, and we’ve had a lot of interest of people signing up already.

It’s a significant milestone in our lives — 50 years since we graduated from high school with a group of people — and whether you want to see people that you ran around in high school that you were good friends with, or you want to meet somebody brand new that you’ve never even known in high school, it’s just that opportunity for a day to get back together.

We have those common things that we shared, starting out at a new school.