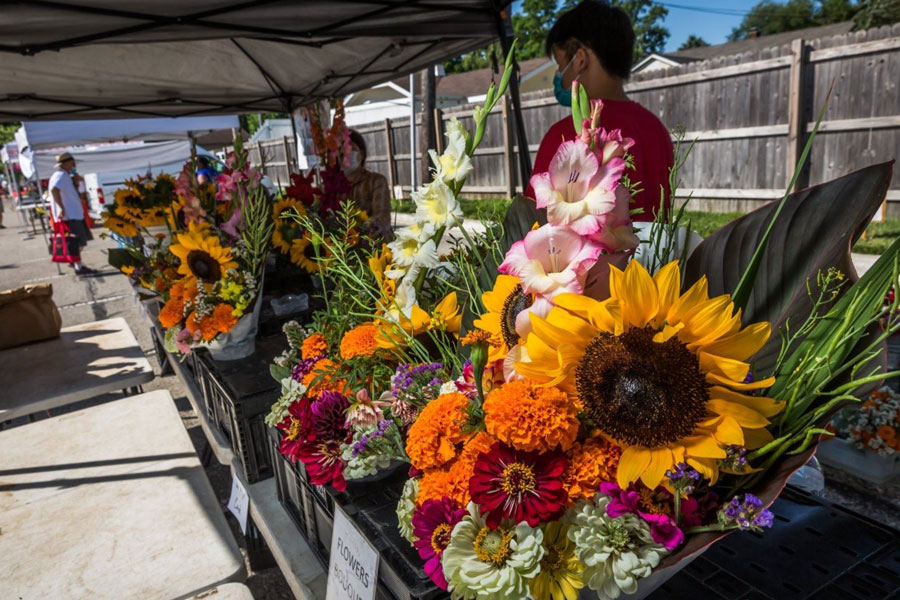 The city says traffic this summer at the Overland Park Farmers' Market at Matt Ross Community Center has broken records, with most Saturdays recording 6,500 visitors or more. The city announced Thursday the market will stay at Matt Ross through the 2021 season, which ends in November. Image via City of Overland Park.

Overland Park announced Thursday that the city’s farmers’ market will remain outside the Matt Ross Community Center through the rest of the 2021 season.

Why it matters: Debate about the long-term future of the city’s popular farmers’ market has grown more urgent since the COVID-19 pandemic prompted the city to move operations to Matt Ross, 8101 Marty St., a few blocks away from the Farmers’ Market Pavilion downtown.

The city has said having the market in the Matt Ross parking lot allows vendors to spread out more than at the pavilion, accommodating social distancing guidelines.

In its announcement, the city cited the need for ongoing pandemic precautions as COVID-19 cases increase again, along with record-breaking traffic this summer, as reasons for keeping the market at Matt Ross through the current season, which ends in November.

Key Quote: “Operations at this location have been incredibly successful, bringing in more than 6,500 shoppers at most Saturday markets,” the city statement said. “Two different July weekends [this year] smashed market records, with more than 7,800 shoppers visiting Downtown Overland Park.”

Details: The decision to stay at Matt Ross will impact both Wednesday and Saturday markets for the next few months.

The city hosts farmers’ markets on Wednesdays from 7:30 a.m. to 1 p.m. through September.

In addition, the city currently hosts markets on Saturdays from 7:30 a.m. to 1 p.m.

In October and November, the Saturday market hours will be adjusted, running from 8 a.m. to noon.

All these upcoming markets this year will continue to be held outside Matt Ross.

Bigger picture: Earlier this summer, as cases of COVID-19 ebbed, a group of downtown merchants started an online petition urging the city to move the market back to the pavilion near Clock Tower Plaza on Santa Fe Drive.

They contended that the decision to move to Matt Ross, though just down the street, had hurt their foot traffic and made downtown less of a destination on weekends.

But some vendors have said having the market at Matt Ross has proven a tremendous success, with more customers and a greater feeling of safety during the pandemic than the pavilion could have provided.

In June, a city council committee discussed the long-term future of the market, and officials acknowledged that whatever is ultimately decided, it will have to come after a lengthy public process.

What happens next: The city has begun looking forward to 2022.

In its statement Thursday, the city said the decision to stay at Matt Ross this year “allows staff to continue with existing pandemic operations and begin making plans for the upcoming 2022 farmers’ market season.”