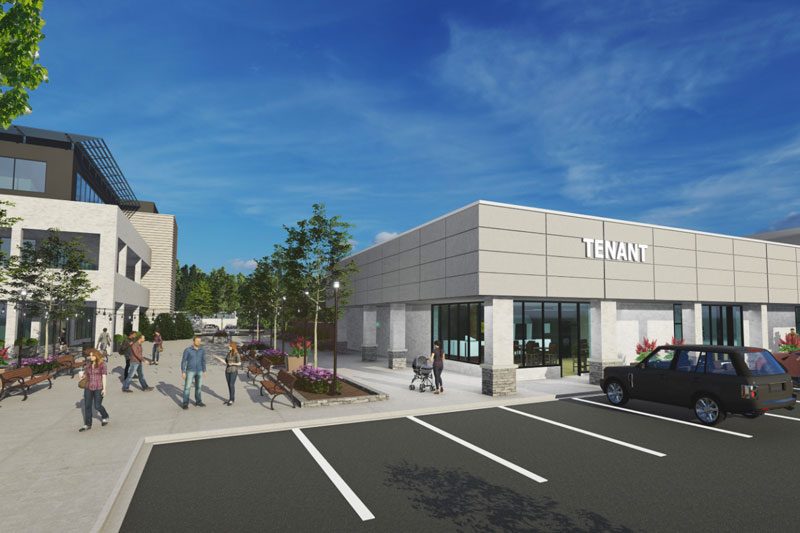 Developers are proposing facade updates and a two-story, 14,000 square foot daycare at Meadowbrook Shopping Center off 95th Street and Nall Avenue in Prairie Village. The planning commission moved the preliminary development plan forward, but wants the applicants to come back in September with details about traffic flow and security. Image via city documents.

Klover Architects and R.H. Johnson Company, the applicants for the project, are planning on tearing down the north central portion of the existing shopping center to build a two-story, 14000 square foot daycare center.

A playground adjacent to the daycare center is also in the plans, as well as facade updates and parking adjustments.

Eric Gonsher, a R.H. Johnson company representative, said R.H. specializes in shopping center redevelopment throughout the midwest — and the Kansas City, Mo.-based company is eager to work on one close to home.

“We’re really excited about the project,” Gonsher said Tuesday evening. “Obviously the shopping center has been neglected for years. Frankly, we want to get into it as soon as possible before even this winter to make sure we can start the project and deliver a beautiful product for Prairie Village.”

These plans called for the following:

Additionally, cosmetic facade updates would include materials like brick and cast stone. The applicants did not give specific details about how many children would be enrolled at the daycare center.

Although planning commissioners expressed support for the plans, multiple commissioners also raised concerned about the traffic flow of the site, as well as security.

As currently proposed, there would be no drive-thru option for parents to pick-up or drop-off their children. Instead, applicants said parents would be expected to park — perhaps in one of the proposed parallel parking spots along W. 94th Terrace — and walk their children in or out of the facility daily.

Additionally, while the building would be oriented to face 95th Street, parents could logistically enter the building from the north or the south.

Commissioner Nancy Wallerstein expressed concerns with both the idea that parents would want to park for pick-up and drop-off, as well as the double entrance option.

“Usually, there is a [front desk] so [the daycare] can vet who is coming in and out, and then another door after they’ve entered before the classrooms start,” Wallerstein said. “I am not buying into your scenario of coming in both doors. I don’t think that’s going to happen, it’s going to be a personnel nightmare.”

Goshner said the prospective tenant, a national daycare provider with more than 300 locations, emphasizes the importance of parents coming in and out of their buildings, which is why no drive-thru option was included in the plans.

Despite the planning commission’s concerns with traffic flow and security, the preliminary plan was unanimously approved and will go before the city council for consideration.

The final redevelopment plan, however, was continued to the September planning commission meeting.

Klover and R.H. Johnson are expected to discuss traffic flow, security and capacity details with the prospective tenant in order to address the commissioner’s concerns next month.

The planning commission unanimously approved the preliminary plan on the following conditions, as outlined in city documents: