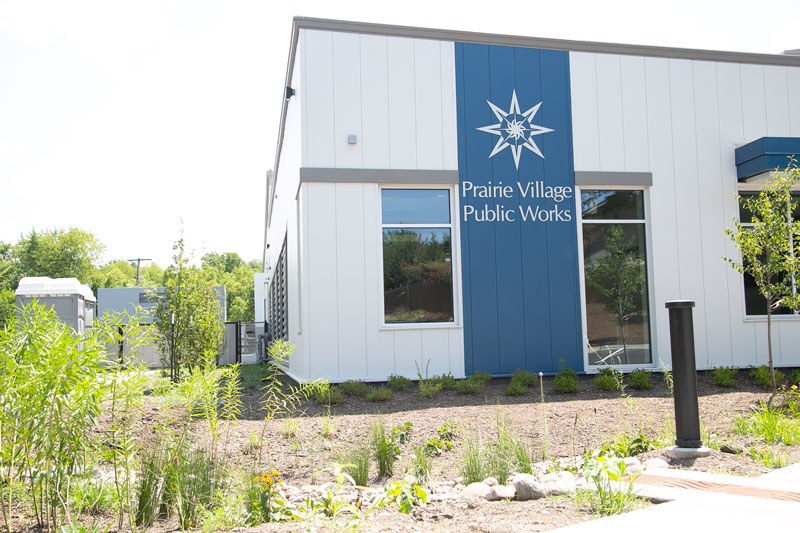 The new Prairie Village public works facility is nearing completion, and is on its way to achieving LEED Platinum certification, the highest possible rating for measuring a building's environmental impact.

The new building, which replaced the decades-old facility at the same location, features a solar panel array, state-of-the-art heating and cooling systems, a washing bay for trucks, a garage with several ports and more.

As final touches are being made, the new facility is on its way to achieve Leadership in Environment and Energy Design, or LEED, Platinum certification — the highest rating possible for measuring a building’s environmental impact.

After a year-and-a-half of working out of an old structure on the property — and watching as the new building went up — Public Works Director Keith Bredehoft said temporary furniture will be moved into the facility in August.

This will allow employees to begin working out of the building without waiting on furniture supply chain delays, he said.

“We’ve been all over the place for a year,” Bredehoft said. “It’s going to be really nice for them to be in one place again and functioning normally.”

Below is a breakdown of the five areas that contribute to those points and the overall LEED certification:

The new facility features a number of other aspects that will make public works operations more efficient, the city says.

Additionally, there is a gender-neutral locker room, men’s and women’s restrooms that double as tornado shelters and a mother’s room that will feature a mini-fridge, chairs and an ottoman.

Bredehoft said the facility should be fully furnished and operational in September, but that is subject to change.

The city is planning to host an open house for the facility, likely after Labor Day, he said.