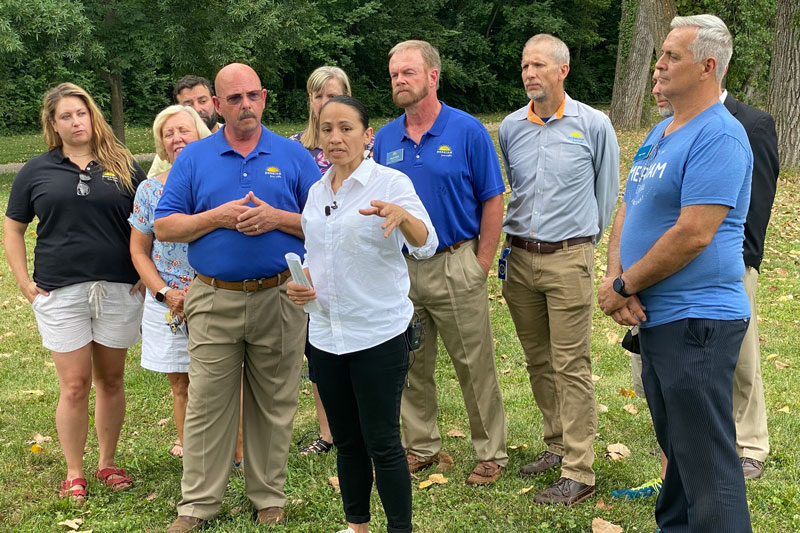 The U.S. House of Representatives on Thursday passed an appropriations bill that includes $500,000 to start the upper Turkey Creek Levee project in downtown Merriam.

That’s well short of the $43 million Democratic U.S. Rep. Sharice Davids requested for the upper Turkey Creek levee project, which would go toward building 3,300 feet of levee and more than 6,800 feet of 6.5-feet tall flood walls.

But the $500,000 approved would kick start the effort by allowing “the U.S. Army Corps of Engineers to begin design and analysis of the project,” according to Davids’ office.

If the measure is approved by the Senate, Davids says the Turkey Creek project ultimately could “impact hundreds of homes” and more than 80 Merriam businesses.

“For the homeowners who deal with consistent flooding and the businesses who worry about its impact on their future, this is vital,” Davids said in a release. “The funding for this project would not only improve safety, but bring significant development and permanent employment to our area.”

The city of Merriam has grappled with flooding issues for decades, which has discouraged investment in new and existing businesses in the downtown area.

City officials haven’t been successful in hammering out a solution with the U.S. Army Corps of Engineers.

City staff and elected officials joined Davids on Saturday to tour the Turkey Creek area and get an understanding of the project details.

Outgoing Merriam Mayor Ken Sissom, who is not running for reelection this year, said the $500,000 federal funding is what the city needs to get the project running.

“We believe it’s funding that will provide the shot in the arm needed to get the project off the ground,” Sissom said in the same release from Davids’ office. “The completion of this project would protect considerable investment and also allow the city and its businesses to redevelop downtown which will greatly improve the economic and community benefits in Merriam and in Johnson County as a whole.”

Whether or not Merriam sees the $500,000 is now in the hands of the U.S. Senate, which will vote on the appropriations bill before the new fiscal year begins on Oct. 1.

A list of Davids’ other appropriations requests for the Third District can be found here.