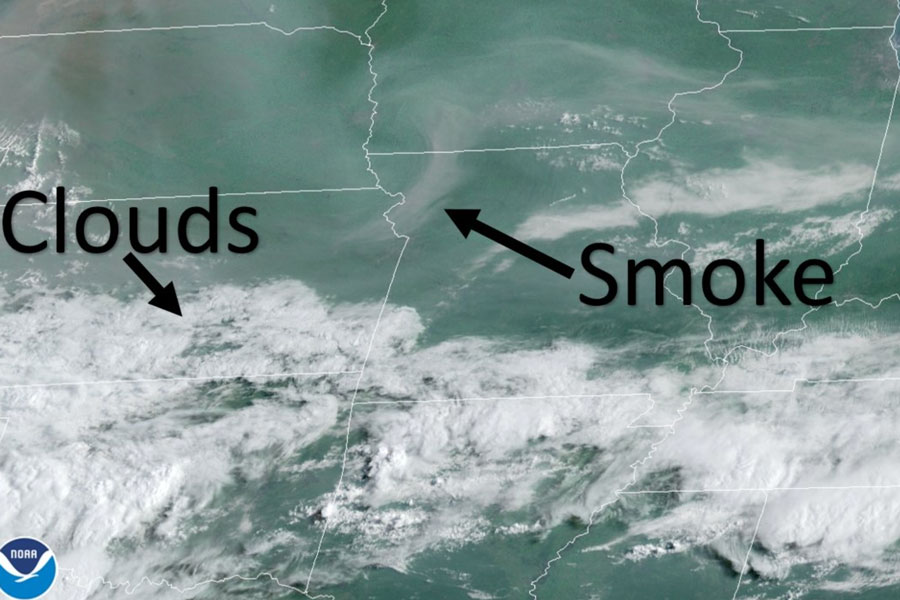 Smoke from wildfires in California, Oregon and western Canada has been carried by winds across the U.S. and is creating a "milky white" haze over the Kansas City region. The National Weather Service in Pleasant Hill has lowered local air quality from Green to Yellow. Satellite illustration courtesy NWS Kansas City Twitter account.

The National Weather Service in Pleasant Hill says a smoky haze caused by wildfires in the western U.S. and Canada is expected to linger over Johnson County and the rest of the Kansas City region through Monday.

The haze prompted the NWS to lower the local air quality from Green to Yellow for Monday.

That means there will be slightly diminished air quality but will not be as severe as during Orange or Red alerts, when its recommended outdoor activity be limited.

Brett Williams, a meteorologist with the NWS in Kansas City, said the smoke is causing the sky in the area to appear “milky white,” and it’s also creating especially vivid sunrises and sunsets.

Williams said those conditions could linger around the Kansas City area through today and even into Tuesday morning.

Smoke from major fires in Oregon, California, as well as in British Columbia, Can., is drifting across the continental U.S.

The smoke has prompted a statewide air quality alert in Iowa.

The city of Merriam is hosting a tree sale that will last until Aug. 16, when orders are due, according to a city newsletter.

Orders can be placed online here, and trees need to be picked up at the public works facility on Sept. 11.

The city of Shawnee is hosting an open house on Aug. 25 as part of the city’s ongoing process to update the comprehensive plan, which shapes development for the city.

The Achieve Shawnee Open House will allow residents to provide input on future housing, land use, transportation, recreation and other city priorities.

More information is available at achieveshawnee.com.