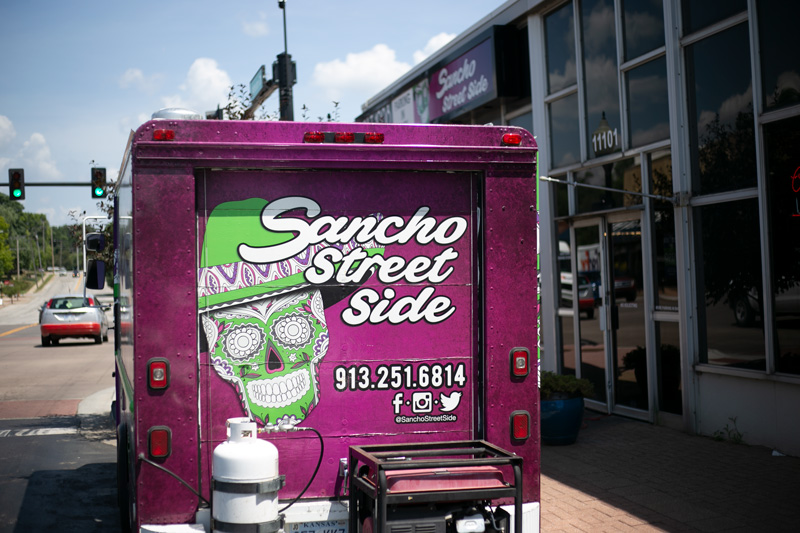 Sancho Streetside, a food truck and catering business, its moving its restaurant and operations from downtown Shawnee to the former site of the Garrett's Bar and Grill.

Sancho Streetside is leaving downtown Shawnee and moving into the space at 65th and Nieman formerly occupied by Garrett’s bar and grill.

Sancho’s Cantina & Smokehouse will be located at 6505 Nieman Road.

The building was home to Garrett’s, a neighborhood bar and grill recently moved to another location in Shawnee and rebranded itself as The Social Bar & Grill.

Ryan Moody, owner of Sancho Streetside, a food truck and catering business, said he and his team are excited for the new opportunity, but they feel sad about leaving their location at Johnson Drive and Nieman Road.

“We’ve always wanted to have our own stand-alone brick and mortar,” Moody said. “We’re really sad to be leaving downtown because we always felt like a big part of the downtown. We did as much as we could for the surrounding community, and we love the support we’ve gotten while we’ve been down here.

“We saw an opportunity that we could own our own building, so we jumped at it. At this point, we’ve been priced out of the downtown, but it rolled us right into a great location.”

Moody said they plan to do some extensive renovations, including updating both the exterior and interior, expanding the outdoor seating in the front and expanding the kitchen to make room for the smoker pit out back.

The stand-alone building on Nieman also allows room for Sancho to grow its food truck and catering operations.

“The community is who we have to thank,” Moody said. “We really do. It’s the people who come in day after day, the people who make it a point to come down and support local businesses like Sancho’s.

“We know that’s the reason why we’re here, and we’re just happy that we were able to stay in this community and keep growing with the community. The only thing that makes us sad is leaving downtown.”

Improvements begin soon, and Moody hopes to open the cantina and smokehouse between late October and December.

He expects the buildout of the old bar and grill to be an easier project, unlike their current location at 11101 Johnson Drive, which is a 100-year-old building and the original site of Shawnee State Bank.

The Shawnee City Council on Monday unanimously continued the city’s Shawnee Entrepreneurial and Economic Development agreement with Sancho Streetside. That agreement provides $31,500 to the business as rent assistance, freeing up capital for building improvements at the new location.

“We’re extremely happy with it,” Moody said. “We cannot express how much we appreciate them working with us. Just the fact that we worked so hard to stay in Shawnee, and that they rewarded us for staying in Shawnee means a lot to us.”

Part of a revitalizing Shawnee

Turning the downtown location into a full-fledged restaurant was not part of Moody’s original plan. But when downtown Shawnee began growing again, with the recent openings of Aztec Theater, McLain’s Market, two new breweries and a new cocktail bar, Moody decided to join in.

Then, the COVID-19 pandemic hit, and Sancho Streetside had room at their downtown space to allow for social distancing among tables.

“I feel like that’s where a lot of our new patrons came from, was word of mouth, ‘Yeah, you can go into Sancho’s, you’ll be like 15 feet away from somebody,’” Moody said. “We progressed into it, and we saw that we had a concept that could be a larger concept.”

Moody said they explored other locations downtown, including the old Shawnee Auto Plaza with its five-bay garage and the old Enterprise building. But ultimately, the old Garrett’s seemed to be the right fit as a stand-alone building with curb appeal.

“It sucks that we left downtown, but we’re really only a block and a half out of downtown,” he added. “We’re on 65th and Nieman, and Shawnee Mission Parkway is where downtown stops. There’s also the 75th corridor they’re starting to work on, so we’re going to be right on that run in between the two of them.”

Since the Garrett’s building was constructed in 1974, Moody hopes to restore the old neighborhood bar to its former glory and use period pieces to give it a ‘70s nostalgic feeling.

“We like to repurpose stuff,” Moody said. “I mean, we repurposed a bank to start our company. Now, we’re going to take an old bar and grill and turn it into our little smokehouse cantina.”

His father, Steve Moody, who recently retired from a career in project management, will lead construction.

“I’m going to kind of follow behind him and learn a little bit,” Moody said of his father. “Because I know there’s still things I need to learn from the guy, and I get a great opportunity to build something with him that I can be proud of down the road.”

The restaurant will also have an expanded Tex-Mex barbecue menu under the direction of newly hired Chef Austin Cox, a graduate of Johnson County Community College’s culinary program.

“He brings a whole farm-to-market feel,” Moody said of Cox. “He’s definitely the guy I want in the position. He’s younger, he’s passionate, he’s aggressive. He wants to get out there, he wants to try new stuff.”

Moody is particularly excited that they’re staying in Shawnee and growing with the community, but he says he doesn’t want to stop with the cantina.

He has “a lot more concepts,” but he’s waiting to see how the cantina goes.

“This has been something I’ve wanted to do my whole life,” he said. “I’m also a person that won’t stop tinkering with something until I think it’s right, so I will be with Sancho’s until I know it’s where I want it to be. We feel that we’ve only seen the tip of the iceberg for what Sancho’s can do.”