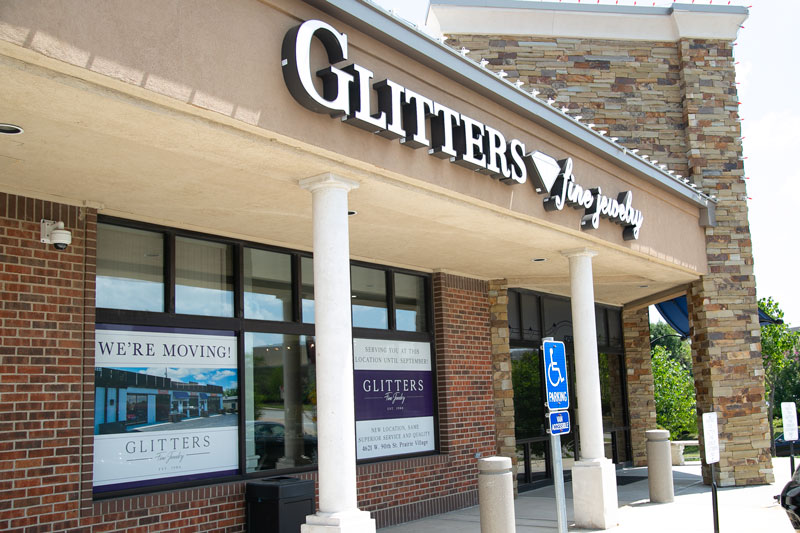 After 25 years at Leawood's Camelot Court, Glitters Fine Jewelry (above) is moving to Prairie Village's Somerset Plaza into a space a couple of doors down from the former Tatsu's French Restaurant. Glitters hopes to be fully operational in the new space by the end of September.

Debbie Droskin, co-owner of Glitters, said she searched four years for a new location and said when she pulled into Somerset Plaza at 4601 W. 90th Street in Prairie Village, she felt it was the perfect spot.

Droskin’s mother founded Glitters out of her kitchen in 1980 and had opened a storefront in Ranch Mart Shopping Center by 1985. They later moved to Camelot Court at 119th and Roe in the late 1990s.

Droskin said with those local roots, plus a quarter century’s worth of building a customer base further south, she didn’t want to move too far away.

She stumbled across Somerset Plaza after getting lost on a drive, and didn’t look back.

“It just gave me a breath of fresh air, and that was what I had been looking for,” Droskin said. “ I’m hoping we’ll have fun, more gatherings and update ourselves a little bit — but being the same people, you know, staying the same.”

Two major factors contributed to the long-awaited move, Droskin said: the noise of large commercial construction in the busy area around Camelot Court, which is at 119th and Roe, near Town Center and Hawthorne Plaza; and a younger clientele, who shop differently.

The Somerset Plaza store will be a downsize, but Droskin said it will allow her to manage Glitters’ online store a little more.

Glitters is aiming to be completely moved in and operational at Somerset Plaza by the end of September, Droskin said.

New jewelry designs are also in the works, and will be unveiled with the new store, she said.

One thing that will remain the same, though, is the level of customer service Droskin’s mother instilled in her, her sister and four original employees who still work at Glitters.

“[Customers] can expect the same customer service and a more relaxed environment with the same luxury we’ve had for years,” Droskin said.