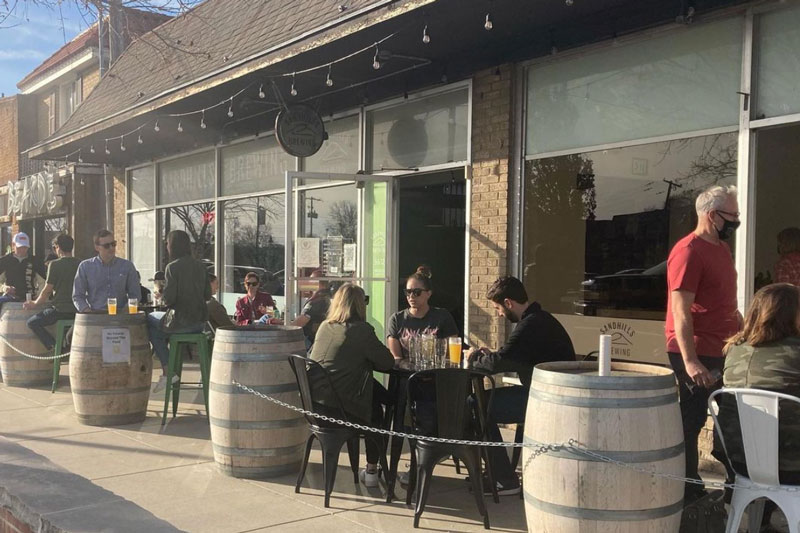 Sandhills Brewing, a local brewery in downtown Mission, will be replacing some of it's fixed windows with garage doors to allow for an easier flow between the brewery's interior and the sidewalk patio outside, co-owner Joe Cizek said. Photo via Sandhills Brewing Instagram.

Sandhills Brewing, a local microbrewery in downtown Mission, is getting a new look.

The city of Mission planning commission on Monday approved Sandhills’ request to replace its front windows with garage doors. Sandhills co-owner Joe Cizek said adding the doors is part of the brewery’s two-year long effort to find ways to open their space up more.

After looking at the city’s Johnson Drive design guidelines, Cizek said he came to the conclusion that replacing the front windows with garage doors that could open and close would be the most affordable option.

While conforming to the city’s guidelines slowed Cizek down a bit, he said, finding a way to to help the “flow of customers at the brewery was important.

“If it’s easier to come in and out of a building where there’s no barriers or obstacles, people are going to come in, have a beer and maybe go down to the coffee shop or the game shop [afterward],” Cizek said.

Sandhills received the city planning commission’s approval, but on the condition that the vertical bars between the window panes (called mullions) on neighboring storefront’s glass match the ones on the new garage doors as much as possible.

Cizek did not offer an exact date for when construction might begin.

However, he said ideally, work would begin on a Monday and be finished in roughly 48 hours in time for Sandhills to open on Wednesday afternoon. (Sandhills is closed on Mondays and Tuesdays.)

With supply chain delays, though, Cizek said the equipment needed could take anywhere from six to 16 weeks to arrive — leaving a construction timeline unknown.

Despite the uncertainty, Cizek said Sandhills is eager about the change.

“We’ve been talking about it for almost two years, and here we are,” Cizek said. “We’re really happy to finally get to a point where we can move forward with a long term goal.”

The planning commission approved the request in a 5 to 1 vote, city planner Kaitlyn Service said.