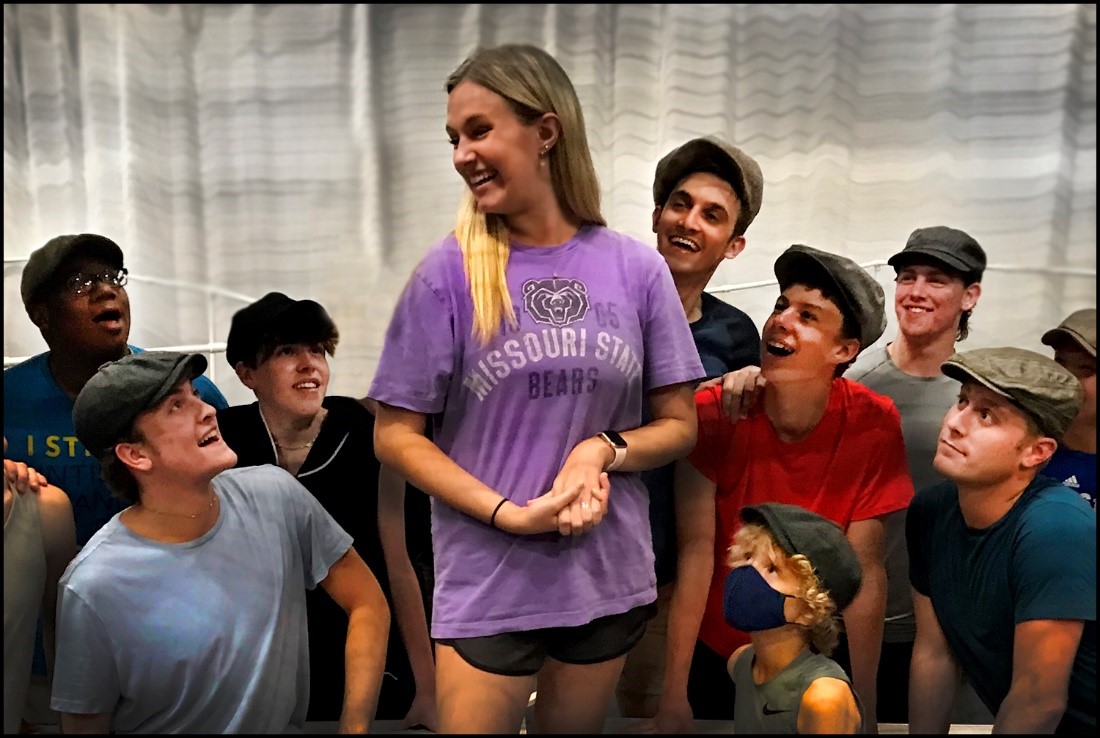 McKenna Harvey (Katherine) and the Newsies.

“We’ll all be out there, carrying the banner man to man!”

In 1992 a movie was released. A movie MUSICAL! Disney’s “Newsies,” the musical.

I was a little younger then, but I can still remember the excitement I felt waiting for it to be in the theaters. As a dancer, I could NOT BELIEVE the trailer of the movie…which sported DOZENS of dancing boys and young men. It was mind boggling! All those guys, dancing like maniacs! You just didn’t see that. Never mind movie musicals were not terribly hip around that time!

It was one thing watching the old standards with Gene Kelly, Fred Astaire, Donald O’Conner… you know the ones! And even though “Newsies” is set in the late 1800s, it was modern! It was now! Leave it to Disney. Of COURSE, they would do something so cool, modern, and RIGHT. They did it right. In some way – in my brain, it was introducing dancing to an entirely new generation of guy dancers and in a small way made it cool to be a guy… and a dancer. (Oh, and by the way, Christian Bale was the star! Who knew he could sing and dance?!)

For so many years I’d performed in and choreographed shows for the stage at TIP, and time and time again, male dancers were at a premium! The few that were around were stretched thin and were certainly used to being BEGGED to be in shows. And here was a movie that had TONS of guys dancing. It was just amazing. It was heartwarming to see. It was an inspiration.

Fast forward. March of 2012. It happened again. Only THIS time…Broadway! Thomas Schumacher and Disney Theatrical Productions adapted that movie and put the show on stage at the Nederlander Theatre. And once again… a show full of male dancers! Dancing like crazy for over 1,000 performances! The original Broadway production won the Tony Award for Best Original Score (music by Alan Menken) and Best Choreography (Christopher Gattelli). And it’s really no surprise. The songs in this show just soar and the choreography is really amazing. It’s a feast for your eyes AND your ears!

OK… one last time… fast forward again. July of 2021. Not Broadway…but TIP! Over 20 fellas are in rehearsal and getting ready to dance THEIR feet off! Really, there’s an entire cast of truly talented folks preparing to tell the tale of Jack Kelly, the charismatic leader of the newsboys in 1899 New York City.

As the story goes, Joseph Pulitzer (a titan of publishing) decides to raise the distribution prices of newspapers. In those days the paperboys (aka: newsies) had to pay for the papers BEFORE they sold them. Which meant, of course, they had to sell them for even more than before. So, raising the prices of the papers really made it very difficult for the newsies to support themselves and their families. In retaliation, Jack Kelly rallies the newsies from all over NYC and persuades them to strike against the unfair conditions and fight for what’s right!

Naturally, there is a love story woven into all the singing and dancing. Enter… quick-witted and bright young reporter Katherine. As you can probably guess, Jack is smitten, and much singing ensues. (It is a musical, after all.) Katherine is not having any of him though, and cleverly rebuffs him. (At least at first!) (Again… it’s a musical!) And that’s all I’m gonna tell you about that! You’ll like being surprised.

One of the well-known tunes in the show is “Seize the Day.” It’s one of my favorites. Here are a few of the lyrics…see what you think…

“Now is the time to seize the day.

Stare down the odds and seize the day.

Minute by minute, that’s how you win it.

We will find a way.”

You might agree… It’s a pretty good lyric to live your life by really.

As we bring our summer season to a close, I’d like to thank everyone who came out to the park, saw a show, and supported us through this step BACK ONTO OUR STAGE! It’s been a wonderful summer.

Thank you. I hope you will join us for this last production.

As always, we’ll be really happy to see you!