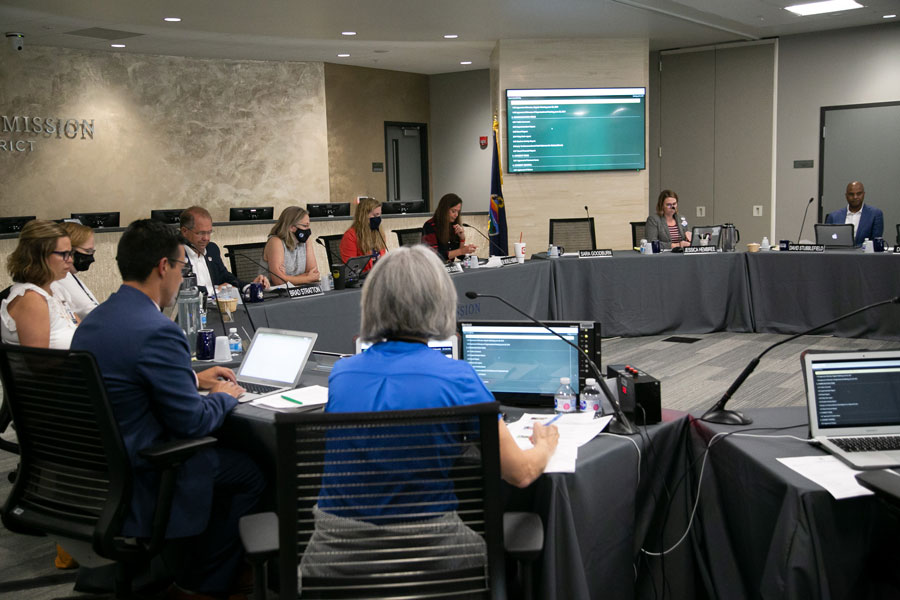 The Shawnee Mission Board of Education has approved a change to the way it conducts public comments at its meetings that will result in public comments no longer being livestreamed online.

The board began considering the change after YouTube removed a video of its May meeting due to “medical misinformation” shared by commenters during that meeting’s public comment period.

Though YouTube never specified the “misinformation” that prompted its decision, several commenters during the May meeting made claims about the ineffectiveness of masks and the danger posed by COVID-19 vaccines that have been debunked by scientific research.

The policy change approved Monday by the board would essentially make the regular board meeting and the public comment period two different meetings.

This would allow the district to livestream the regular board of education meeting without the public comment period included, as has been the practice.

From the district’s perspective, this would minimize the risk of sharing misinformation and potentially losing sharing privileges on YouTube, but the changes received push back from the public and some board members.

Kim Whitman, a Shawnee Mission parent, started an online petition calling on the district to not implement the proposed policy.

Whitman asked the board during public comments on Monday that she and the nearly 600 other people who signed the petition be heard.

“I want my children to learn that their voices make a difference,” Whitman said. “I want to know that the elected officials who represent me care about my voice. I want a government that is transparent and accountable. These values are priceless.”

In order to accommodate for some of the criticism, the board on Monday loosened the hard 30-minute time limit for the new proposed separate public comment period to say, “The Board generally will meet for up to 30 minutes for the purpose of public comment.”

Sarah Goodburn, the SM North area representative on the board who supported the change, said the “generally” included in the amendment will afford the board flexibility to adjust the 30-minute window.

“There could be situations where leadership is told there’s quite a few people who want to speak, and we could potentially lengthen that [30-minute] time,” Goodburn said.

Still, the policy change does not account for how the district will handle livestreaming or broadcasting public comments as a separate meeting. The lack of a clear livestreaming protocol stirred up some concerns about a lack of transparency.

Jessica Hembree, the SM South area board member, attempted on Monday to amend the proposed policy to include language that specified that the public comment and regularly scheduled board meeting would both be livestreamed and published somewhere for the public to view.

That amendment failed in a 5 to 2 vote with Hembree and SM Northwest area board member Jamie Borgman voting for it.

The changes the board ultimately approved for its manual will now state that public comments will not be livestreamed or archived, and it removed the term “public comment” from the board meeting section.

Additionally, the changes specify that board meetings or workshops (now separate from public comments) will “be livestreamed and archived.”

Prior to the roll call vote on the livestreaming changes, Laura Guy, the SM West area board member, said she wanted to be clear about her vote after hearing the community’s concerns about a lack of transparency.

“To me, the word transparency applies to the work of the board, the things that we do in our board meeting, the votes we take and the decisions we make,” Guy said. “To me, public comment is one opportunity we give the public to speak to us in-person.”

The final changes to the board’s manual were approved in a 5 to 2 vote, with Hembree and Borgman in opposition.