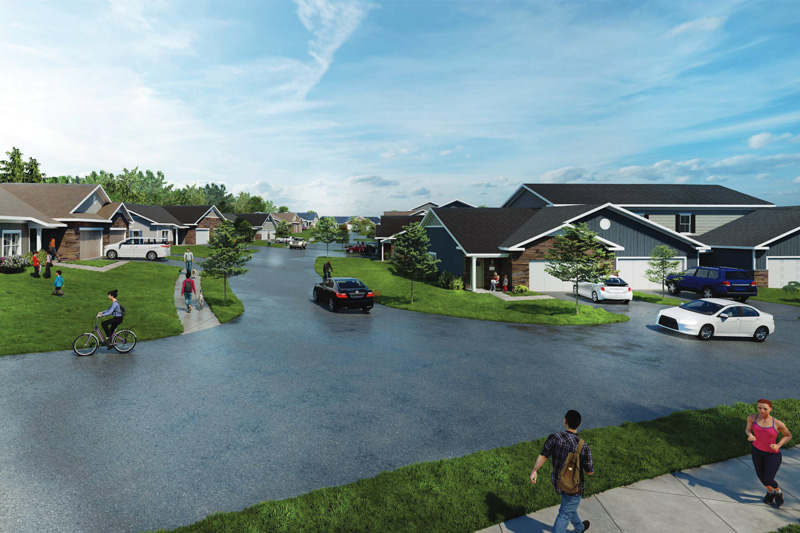 The Shawnee City Council voted 5-3 to approve rezoning for a site planned for the development dubbed Creekside Ridge, a proposed townhome-style project near Mill Valley High School led by local developer Kevin Tubbesing. Above, a design rendering of the development.

After about an hour of deliberations over concerns with the project, the city council voted 5-3 to approve rezoning of the site for the townhome-style residential development near the Grey Oaks neighborhood and Mill Valley High School.

The council’s discussion and the split of opinion among councilmembers followed a similar dynamic on the Shawnee Planning Commission, which approved the plan earlier this month.

The commission also voiced a mix of support and concern, and some commissioners (along with councilmembers Monday) asked for the developer to give the projects’ design a more aesthetically pleasing look.

“This is butting up to two pretty nice neighborhoods, Woodland Parks and Grey Oaks,” said Councilmember Kurt Knappen. “And so, it needs to blend well.”

Tubbesing said he must strike a balance between designing a more expensive look and creating a set of housing stock that is more affordable or attainable for tenants.

Ohio-based Stark Enterprises is gearing this development towards a “renter by choice” demographic, he said, such as young families and empty-nesters.

“Architecturally, I think this is very nice, and I do think it fits into the neighborhood, the homes in the neighborhood, from what I can tell as far as a drawing shows me,” said Mayor Michelle Distler. “But as far as the ranch homes, we don’t have enough. It’s a high demand.”

A handful of neighboring homeowners spoke against the development.

One couple, David and Tracy Jackman, said the proposed development is too close to their home on Anderson Street and will cause traffic congestion.

“We know something’s going to be built there; we think it should be a better product than this,” said David Jackman.

Below is another design rendering of the project: 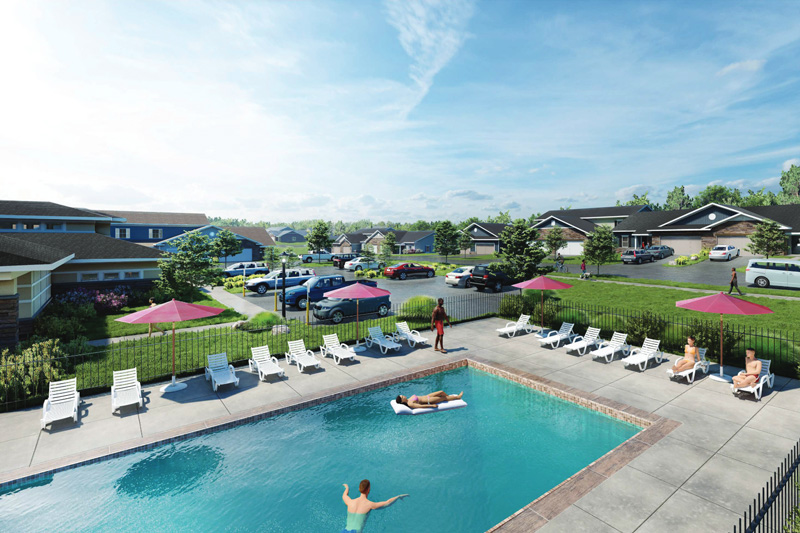 The council gave this project particular scrutiny because some of the townhomes will have six units in them.

These “six-plexes” are a unique housing type in Shawnee and the Kansas City metro area, Tubbesing said, which will result in a higher level of residential density. He argued that this would make the project more financially viable on a piece of land with more challenging topography to build on.

Another project with much higher density already has city approval from several years ago, Tubbesing pointed out, and the townhome project at Creekside Ridge fits in better with the surrounding neighborhood.

Stark Enterprises, a real estate development company based in Cleveland, Oh., is planning to build 146 residential units in 36 attached townhome-style buildings on about 33 acres in the 6300 block of Silverheel Street.

The development still requires final plan approvals from the city before construction can begin. Tubbesing said his team will work with the city to fine-tune the aesthetics of the project.

A recording of the meeting is below and on the city’s website. Discussion begins at 1:28:58.