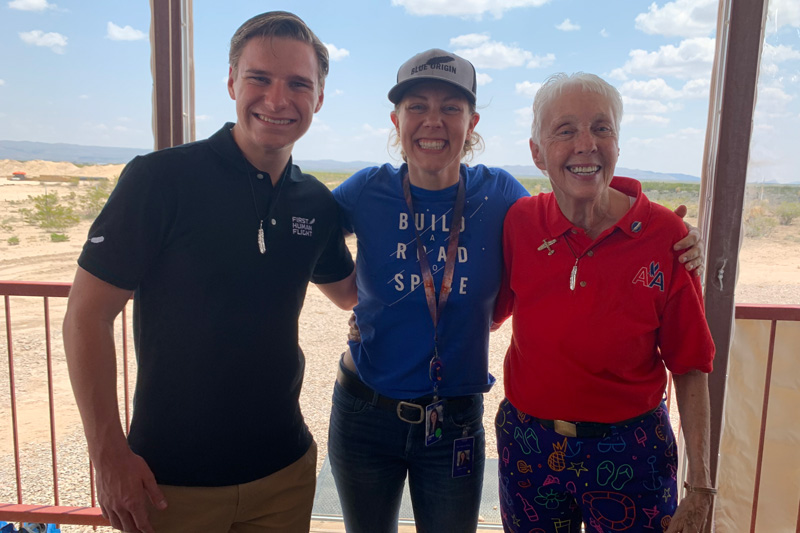 SM East grad Laura Stiles (above, center) played a key role on the team that helped in the launch of Blue Origin's New Shepard on July 20, a project funded by Amazon founder Jeff Bezos. Stiles, a Prairie Village native and the senior manager of launch operations for New Shepard, took a picture with Oliver Daemen (left), the youngest person to go to space, and Wally Funk (right), the oldest person to go to space and one of the so-called Mercury 13 crew members, a group of female pilots who qualified to go to space in the 1950s but were not allowed to because of their gender. Photo courtesy Laura Stiles.

Stiles, a Prairie Village native and 2004 SM East grad, played a key role on the team that helped in the July 20 launch of Blue Origin’s New Shepard, the rocket funded by Amazon founder Jeff Bezos.

Stiles leads a team of 12 as the senior manager of New Shepard’s launch operation at Blue Origin.

Her crew was responsible for putting together a launch crew, training and documentation of procedures. Key to her team’s work was thinking through anything that could go “off-nominal” (or wrong) on launch day and coming up with solutions for any problems that could arise.

“Every day, we’re talking about what that one day looks like,” said Stiles, who served as capsule marshal on launch day. “It’s something we’ve been talking about every single day for years and years, especially this launch and my role.”

When Bezos and three other flight crew members — including 82-year-old Wally Funk, the oldest person to fly in space — landed safely in the desert in western Texas, Stiles and her team handled logistics for recovery, coordinating all of the details for the capsule, media members, care for the astronauts and reunification with their families.

“Being there for the moment when the hatch has opened, the astronauts stepping out of the capsule and the expressions on their face, and their families were out there, it was like this big reuniting celebration moment,” Stiles said. “That was extremely special and meaningful to be able to be there for that moment.”

For Stiles, it was also particularly special to see the look on Funk’s face when the 82-year-old pilot emerged from the capsule — 60 years after she was denied the opportunity to fly through space because she’s a woman.

“No doubt, many emotions will accompany me to the launch site tomorrow — and I just can’t wait to see the expression on Wally Funk’s face when she steps out of the landed crew capsule and re-writes the ending of the story of the Mercury 13 badass women astronaut trainees,” Stiles wrote in a Facebook post July 19.

Stiles served as a mechanical engineer at Blue Origin before taking over her role managing the launch operation team in 2018.

“We’ve been working on it for so long, it was so cool to have Wally Funk on there, and even to have Jeff Bezos on there,” Stiles added. “It really felt like a testament to his confidence that we have built a safe system, which was really neat.”

She credits her support team back home, including a slew of STEM-focused teachers at Shawnee Mission East, especially her old chemistry teacher, Steven Appier, for encouraging her to pursue her interests and passion for a career in aerospace engineering.

She earned an engineering physics degree with a concentration in aerospace systems at the University of Kansas.

Jim Zimmerlin, a friend of the family, has shown his passion for space exploration and support for Stiles and her work at Blue Origin. He bragged about Stiles in a recent Facebook post.

As far as next steps, Stiles hopes that she and her team can take what they’ve learned from the launch operation of New Shepard and apply it to future launch operations for the other programs at Blue Origin, such as orbital space travel and a Moon landing system.